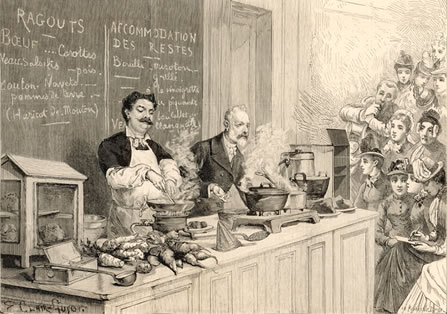 After reading The New York Magazine’s list of the Top 20 Chef Empires, and perusing a few culinary books I’d borrowed from the library, I was struck, dumbstruck actually, that all save one of those twenty names are those of men. Many would argue that the age of modern cookery was of the turn of the century. Not only were chefs lifting food to its highest degree, but more and more people were able to partake of the sumptuous, delicate tastes a cook could create due to the falling food prices and rising incomes, if not the lucrative opportunities skilled French cooks could find in the kitchens of America and Europe’s new and fabulously rich. Right around the Edwardian era we saw an explosion of foodie treats, and most notably, women were involved–the “Queen of Cooks,” Rosa Lewis; Fannie Farmer, who raised the Boston Cooking School to prominence; and Marthe Distel, who founded culinary magazine La Cuisinière Cordon Bleu and offered subscribers cooking classes with professional chefs, which in turn led to the formation of Le Cordon Bleu cooking school. 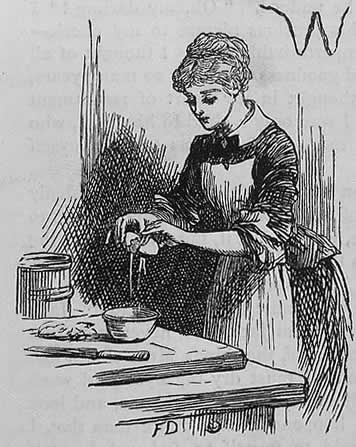 Yet these women have been consigned to the footnotes of history. Farmer’s Boston Cooking School cookbook does remain in print, but as I’ve quickly noticed, Victorian/Edwardian cookbooks written by women are shunted into the domestic sphere, while those authored by men become authoritative. This strange dichotomy of the kitchen is fascinating. Cooking, in its basic format, is seen largely as a feminine position, yet once a man steps into the kitchen it becomes one of power. The male chef is master, he is king of the domain–in etiquette manuals, one never reads of tyrannical female cooks who must be handled with kid gloves. The careers of Rosa Lewis and Auguste Escoffier run parallel, yet Lewis is mentioned frequently in tandem with sex (she was rumored to be the mistress of Edward VII, and her hotel was allegedly a place where English aristocrats met with their mistresses), and Escoffier is lauded as the creator of modern French cookery, despite the fact that the success of his career is also due to the opening of a famous hotel. 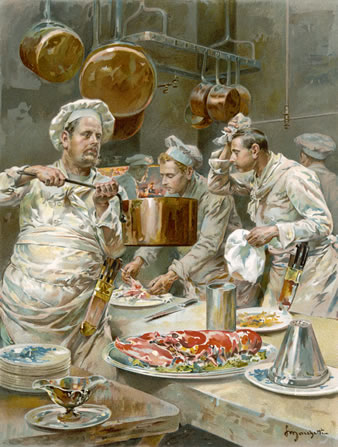 Even today, while watching Top Chef or Hell’s Kitchen, a female cook is rarely seen to raise her voice, shout and/or curse for her sous chefs and other underlings to get a move on. In vintage ads, a woman (frequently a mother) is posed in the kitchen with an apron, slaving lovingly over an apple pie or basting a turkey. For her, the kitchen is non-threatening; it is a place of peace and devotion; she is preparing a meal to nourish her family. The male in the kitchen is attired in chef’s clothing–tall white hat, white coat, dark pants. Frequently, his arms are crossed and he stares belligerently at the camera. Other times he is posed in the act of cutting, dicing, and mashing, and surrounded by a huge cavernous kitchen whose walls and ceilings are covered with big, heavy cast iron cookware.

Interestingly enough, when the White House hired a new cook in 1910, Miss Flora Hamilton was replacing a woman who left the employ of the Presidential mansion to marry. It seems the White House long employed female cooks to prepare and direct the luxurious suppers over which the President and the First Lady hosted (which also brings the issue of race into play, as most White House staffers were African-American, and the image of “Mammy” lovingly preparing food for her employers in the kitchen remained in popular food culture for almost a century after the Civil War). She, however, like all female chefs, is consigned to the footnotes of history, to be unearthed only on accidental diggings through archives.

Further Reading:
The World of Escoffier by Timothy Shaw
The Art of Dining: A History of Cooking and Eating by Sara Paston-Williams
The Duchess of Jermyn Street: The life and good times of Rosa Lewis of the Cavendish Hotel by Daphne Vivian Fielding
The Queen of Cooks – and Some Kings: The Story of Rosa Lewis by Mary Lawton
Coming Out of the Kitchen: Women Beyond the Home by Una A. Robertson
Women As Culinary Professionals

7 replies on “Of Cooking & Gender”