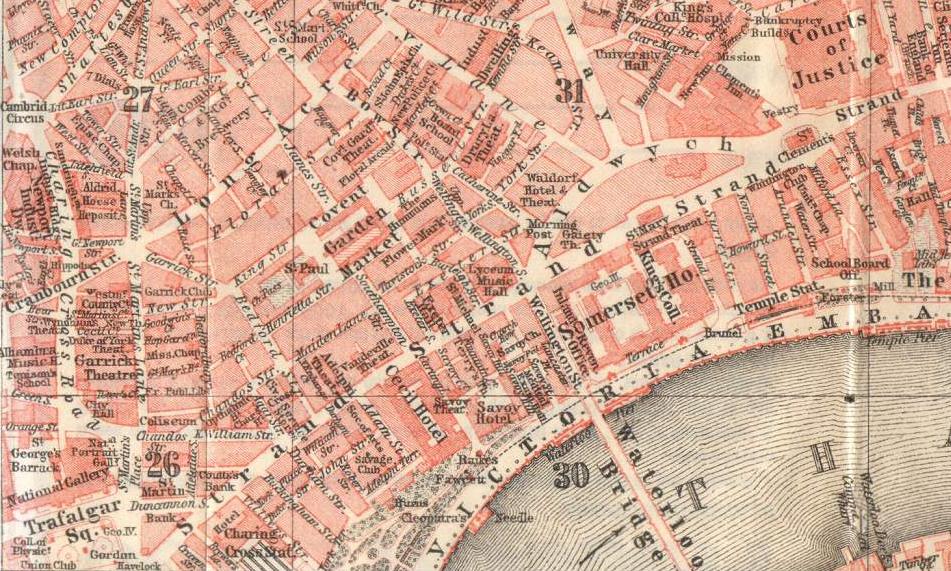 In the manner of New York City’s Broadway, the hub of London theatre and nightlife was The Strand. A famous music hall song of the period entitled “Let’s All Go Down The Strand” sums up the general exhilaration tourists and Londoners alike experienced along this slice of the English capital:

One night a half ‘a dozen tourists
Spent the night together in Trafalgar Square.
A fortnight’s tour on the Continent was planned,
And each had his portmanteau in his hand.
Down the Rhine they meant to have a picnic
Til’ Jones said, “I must decline–”
“Boys you’ll be advised by me
to stay away from Germany–
What’s the good a’ going down the Rhine.”

I’ll be the leader, you can march behind.
Come with me and see what we can find!
Let’s all go down the Strand — Have a banana!
Oh! What a happy land.
That’s the place fer fun and noise,
All among the girls and boys.
So let’s all go down to the Strand. 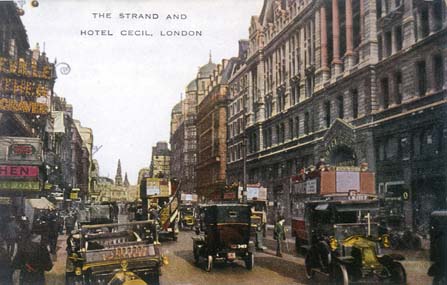 The Strand began at Trafalgar Square and ended at the Courts of Justice, from whence it turned into Fleet Street, and led into the City. A direct route to the financial heart of London, the Strand was justifiably crowded and jam-packed with pedestrians, hansoms, omnibuses and carriages from dusk to dawn. The Strand was originally the shore by the river Thames, and after a brief stint as an open highway scattered with a few houses here and there, it quickly developed into a premiere residential area, lined with palatial mansions whose gardens stretched down to the Thames. The residents ranged from Prince-Bishops, to the highest nobility, to even royalty–which is why many of the streets retain the names of Buckingham, Salisbury, York, Norfolk and Exeter. As fashion moved west, the Strand was abandoned by the aristocracy and the palaces were removed and shops took their place. Until its destruction in 1874, Northumberland Palace, the London residence of the Dukes of Northumberland, and Somerset House (which remains to this day), were the last of these 17th century palaces to remain along the banks of the Thames. 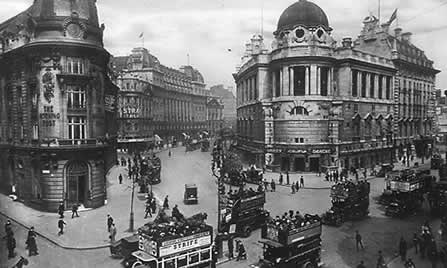 Other definite changes to the Strand occurred during the later half of the 19th century, when the redevelopment of the area in the 1890s led to the demolition of the Globe Theatre, the Opera Comique, which saw the production of many of Gilbert and Sullivan’s wildly popular operettas of the 1870s and 1880s, the Royal Strand Theatre, and the Gaiety for the construction of a new road, Kingsway between Holborn and the Strand, and the crescent wedge between them, Aldwych. On that wedge the New Gaiety Theatre was reopened in 1903, and the attendance of the King and Queen of England to the opening performance legitimized the musical comedy as a respectable form of entertainment. 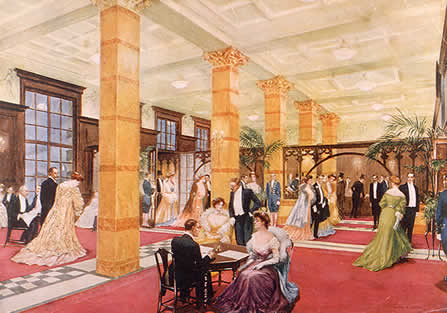 But the most important development along the Strand were the grand hotels and restaurants which sprang up in London seemingly overnight, the most important being Claridge’s and the Savoy. Claridge’s retained its reputation for elegance and aristocratic favor from the day of its founding in 1812 as Mivart’s Hotel. The subsequent visits made by Empress Eugenie and Queen Victoria in the 1860s cemented this reputation, and when Richard D’Oyly Carte, who founded the rival Savoy Hotel, purchased Claridge’s in 1894, he set about revamping the hotel with the latest amenities. It reopened four years later with elevators, suites and a stunning restaurant. The Savoy, was founded by Carte in 1889, and he hired César Ritz as manager, who in turn hired the famous Auguste Escoffier as the hotel’s chef de cuisine. So popular was the Savoy, as both a hotel and a restaurant, it soon became the spot to be for celebrity sighting in the 1890s and 1900s. It was in the restaurant of the hotel where Escoffier invented dishes which became a standard in modern French cuisine, and where many famous celebrations were held. 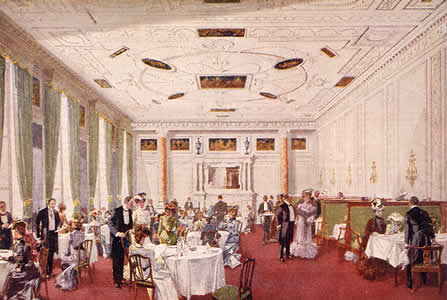 The new trend in dining out also compelled many traditional and traditionally-male enclaves, such as Simpsons-on-the-Strand, to open their dining rooms to ladies. It is here where Margaret Schlegel of E.M. Forster’s Howards’ End has lunch with Henry Wilcox, his daughter Evie and her fiance, who desire to keep Margaret ignorant of the fact that their home was willed to her by the recently-deceased Mrs. Wilcox.

There are moments when virtue and wisdom fail us, and one of them came to her at Simpson’s in the Strand. As she trod the staircase, narrow, but carpeted thickly, as she entered the eating-room, where saddles of mutton were being trundled up to expectant clergymen, she had a strong, if erroneous, conviction of her own futility, and wished she had never come out of her backwater, where nothing happened except art and literature, and where no one ever got married or succeeded in remaining engaged.

Largely considered the heart and soul of recreational London, the Strand was where one could discover just about anyone–including a long-lost brother, as an American visitor was shocked and happy to find in 1913.

Further Reading:
A Wanderer in London by E.V. Lucas
Baedeker’s Guide to London and its Environs, 1905
The Strand District by Walter Besant
The Private Palaces of London Past and Present by E. B. Chancellor
The Gourmet’s Guide to London by Colonel Newnham-Davis

0 replies on “Promenades Through London: The Strand”