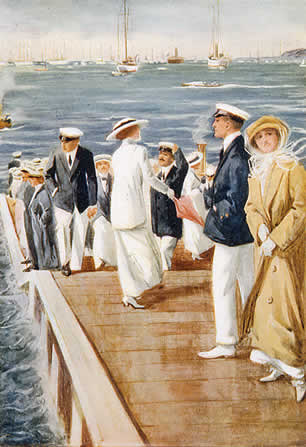 Cowes Week was the last hurrah of the London season. For seven sunny, breezy days during early August, society gathered on the Solent for regattas and royalty. The racing at Cowes began in the 1820s under the auspice of the Prince Regent (later George VI), who was fond of yachting. The first race was held on the 10th August 1826, with the prize of a “Gold Cup of the value of £100.” This royal patronage made Cowes and the Royal Yacht Club (later the Royal Yacht Squadron) a must-see event after the races at Goodwood.

During the late Victorian and Edwardian eras, Cowes was dominated by the bitter rivalry between the Prince of Wales and the German Emperor. Though Kaiser Wilhelm II was somewhat of an Anglophile, he was nonetheless determined to prove the superiority of the German race to his Uncle Bertie. The two men raced one another each year, building bigger, better, and faster boats when necessary. Bertie was not a sore loser, but the Kaiser was so pedantic about his wins, the Prince of Wales gave up yachting altogether after the Kaiser built the largest yacht possible. Another highlight of Cowes Week were the growing number of yachstwomen commanding their own boats in the various races.

On the social side, there were balls, dinners, dances, and parties held either aboard one’s yacht, at Osbourne (until Queen Victoria’s death), or in the snug villas dotting the Isle of Wight coastline. Cowes was also the place to show off one’s summer whites–muslin gowns of dazzling simplicity, airy blouses, and white, rubber-soled shoes–or the smartest blue yachting costume. After this glorious week of boating and sun, the London season came to a close, and society dispersed to all corners of the earth in search of more amusement (and in the case of poorer members, relaxation from expenditure!).

2 replies on “Society at Cowes”