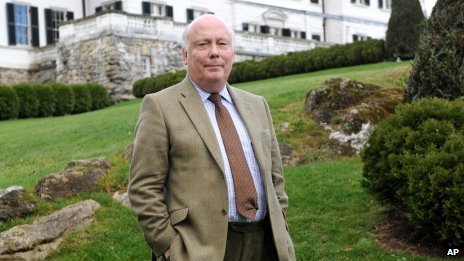 In its release, NBC described the series, which will be called “The Gilded Age,” as an “epic tale of the princes of the American Renaissance, and the vast fortunes they made — and spent — in late 19th century New York.”

Mr. Fellowes said in a statement, “This was a vivid time with dizzying, brilliant ascents and calamitous falls, of record-breaking ostentation and savage rivalry; a time when money was king.”

I fell in love with the Gilded Age after reading Edith Wharton’s The House of Mirth when I was a teenager, and couldn’t resist setting a significant portion of my book, The Townsend Inheritance, in New York and Newport, so I am excited to see it gaining more attention–both positive and negative–on this side of the pond. American history isn’t just about the Civil War! *g* I have blogged a fair bit about life in America (specifically New York City), but to refresh your memory I am creating a brief primer, and look for more posts about the era in the future.

The lavishness we associate with the Gilded Age did not reach its fruition until the 1880s, when “swells” like the Vanderbilts–spearheaded by Alva Vanderbilt, wife of Willie K.–launched a social campaign against the small, snobbish clique of old New York elite known as the Knickerbockers. These were the descendants of the great Anglo-Dutch families who settled in New Amsterdam in the 17th and 18th centuries, and built their wealth on “respectable” trades like shipping and real estate. The boom in American industry after the Civil War created millionaires out of nobodies, and the glitter and glamor of New York attracted them over any other major US city, which meant the old Knickerbockers had to devise ways to keep them out.

Most of the old, genteel Knickerbockers retained their English brownstones in quiet and elegant Washington Square, though some had begun to move up Fifth Avenue towards Central Park. Department store millionaire A. T. Stewart threw down the first gauntlet when he built a grand marble mansion directly across from the Mrs. Astor’s discreet brownstone, but she pointedly never acknowledged the man or his wife, and after their deaths in 1876 and 1886, respectively, Stewart’s magnificent house was rented to the exclusive Manhattan Club–the irony!–before being razed in 1901 to make room for the new premises of the Knickerbocker Trust Company. Many other new millionaires attempted to assail the deeply entrenched society focused around Caroline Astor and her “court jester”, Ward McAllister (from whom the term “The Four Hundred” derived), but it took a woman to best Mrs. Astor at her own game–the pugnacious Southern belle, Alva Erskine Smith.

Alva married William Kissam Vanderbilt, grandson of the family patriarch Cornelius Vanderbilt, in 1875. Cornelius Vanderbilt’s vulgar behavior kept the family out of NY high society, but Alva was determined to use her new millions to become a social leader. She noticed that the stuffiness of the Knickerbockers, with their simple dinners and quiet living, was beginning to grate on younger members of society and correctly predicted that they as well as New Yorkers, thirsted for lavish consumption. She immediately commissioned a magnificent house from Richard Morris Hunt at 660 Fifth Avenue. Her father-in-law, William H. Vanderbilt, had commissioned twin mansions nearby, and both Vanderbilt homes were completed around the same time.

The size and grandeur of these mansions staggered New York, and set off a flurry of media attention about the size and dimensions, the treasures that lay within, and the lifestyle of those who lived within them. Alva solidified her pursuit of prominence by hosting a fancy dress ball for 1000 guests at a cost of $3 million. Carrie Astor, Caroline’s favorite daughter, spent weeks practicing a quadrille with her friends, and in a cunning move, Alva sadly mentioned that Carrie could not take part in the quadrille as she did not know her mother. That sent the Mrs. Astor scrambling to pay a call on Alva Vanderbilt after repeated snubs, and Alva promptly dispatched an invitation to the ball!

Another coup in which Alva was involved was the establishment of the Metropolitan Opera House. Weekly attendance at the opera was de rigueur for Knickerbocker elite, and the opera boxes in the small Academy of Music were coveted by nouveaux riche who were barred from purchasing even one by the directors. The millionaires got their revenge when the Metropolitan Opera House opened in 1883. This building was, as usual, lavish, opulent, lush, and grand, and the three tiers of boxes designated for high society were known as the “golden horseshoe”. The Metropolitan Opera House supplanted the Academy of Music within three years, forcing the Academy out of the opera business and into cheaper entertainments like vaudeville! After these K.O.’s to the Knickerbockers, New York established itself as the playground for America’s social elite, and other major cities emulated their markers of prominence (wealth, mansions, summer homes, Paris fashions, exclusive dances and clubs, and of course, American heiresses).

For a closer peek, here are some of my previous posts on the topic!

The Origins of the Waldorf=Astoria

Further Reading:
To Marry an English Lord by Gail MacColl and Carol McD. Wallace
A Season of Splendor: The Court of Mrs. Astor in Gilded Age New York by Greg King
When the Astors Owned New York: Blue Bloods and Grand Hotels in a Gilded Age by Justin Kaplan
Fortune’s Children: The Fall of the House of Vanderbilt by Arthur T. Vanderbilt
Gilded: How Newport Became America’s Richest Resort by Deborah Davis
Edith Wharton at Home: Life at the Mount by Richard Guy Wilson, John Arthur and Pauline C. Metcalf
First Four Hundred : New York and the Gilded Age by Jerry E. Patterson
The Splendor Seekers: An informal Glimpse of America’s Multimillionaire Spenders by Allen Churchill
The Opulent Interiors of the Gilded Age