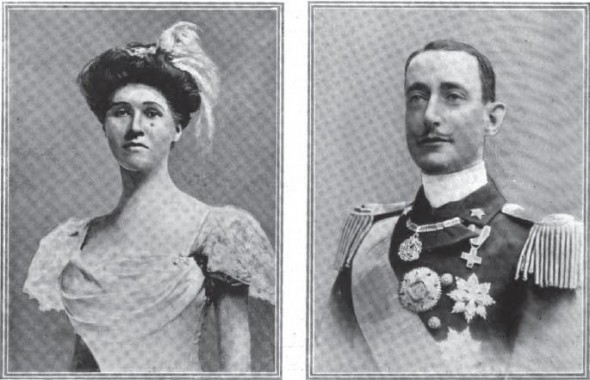 A few years before Anita Rhinelander Stewart nabbed a royal title, there was another American heiress who made an attempt to capture a gentleman born to the purple: Katherine Elkins, the daughter of West Virginia Senator Stephen Benton Elkins. Her suitor was the Duke of Abruzzi, the grandson of King Vittorio Emanuele II of Italy, and celebrated mountaineer. In 1907, the Duke met Miss Elkins in Washington D.C. when he was invited to a private luncheon by President Roosevelt. Romance apparently blossomed and the rumor mill began to work overtime to suss out the details of their pairing. Unfortunately for Miss Elkins, the House of Savoy rejected the notion of her joining their royal house, mostly because it was an anathema to think that the next potential Queen of Italy would not only be American, but a Protestant!

From 1907 to 1912, Miss Elkins and the Duke of Abruzzi’s unofficial affianced status faced the censure of his family and the rampant speculation of the press, the Pope was rumored to have offered to make Senator Elkins a duke, and the potential of an American girl being treated as an equal with her in-laws earned the interest of Austria-Hungarian papers, who saw this as a potential blow against the Princess Hohenberg’s morganatic status. Sadly to say, the two did not get their happily-ever-after. Whether it be the pressure against the match, the lack of privacy, or maybe even the falling out of love after six year, but Miss Elkins and the Duke of Abruzzi parted ways for good in 1912, and she married William Floyd Hitt, son of Congressman Robert R. Hitt in 1913, who had continued to pursue her even as she was embroiled with the Duke of Abruzzi. Strangely enough, Katherine and William divorced in 1921, only to remarry in 1933, and their remarriage lasted until her death in 1936. The Duke continued in his explorations, and took part in the Italian colonization of Somalia, later settling in the country and marrying a Somali woman, where he lived until his death in 1933.

A Prince of Climbers
Bio of the Duke of Abruzzi
Katherine Elkins Hitt at FindAGrave
Death of Mrs. William Hitt
The Prince and the American Girl, from Royal Romances and Tragedies

4 replies on “The Elkins-Abruzzi Affair”