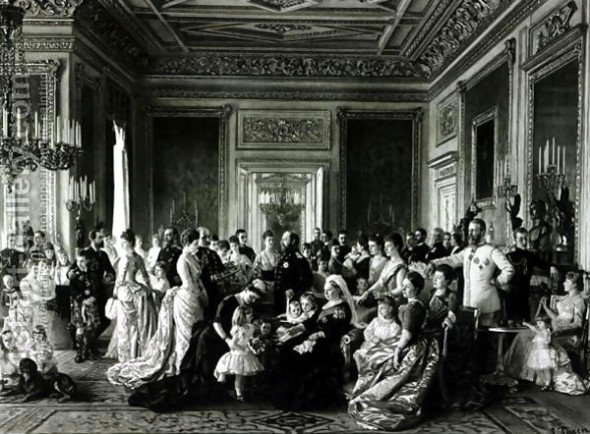 1887 marked the fiftieth year since Queen Victoria’s ascension and a jubilee was planned to celebrate this remarkable date in history. In those fifty years, Great Britain had grown into a vast Empire, a top manufacturer and exporter of goods, a social arbiter, an envied nation, and at the top was crowned the greatest monarch of the age: Queen Victoria. The advent of the jubilee rejuvenated Victoria’s public image, which had taken a beating due to her rabid seclusion in the two decades after the Prince Consort’s death, and the subsequent popularity of the Prince of Wales. The date for the jubilee celebration was set for the 20th of June, exact date of her accession, to which dozens of royals and heads of state were invited to partake in a lavish banquet at Buckingham Palace.

The following day, the Queen “travelled in an open landau to Westminster Abbey, escorted by Indian cavalry. The procession through London, according to Mark Twain, ‘stretched to the limit of sight in both directions’. Bodies of soldiers in one colour, then another, marched past the spectators, who were accommodated on terraced benches along 10 miles of scaffolding erected for the purpose. Queen Victoria rode in the procession in her gilded State landau, drawn by six cream-coloured horses. She refused to wear a crown, wearing instead a bonnet and a long dress.”

“On return to the Palace, she appeared on the balcony, where she was cheered by huge crowds. In the Ballroom she distributed Jubilee brooches to her family. In the evening, she put on a splendid gown embroidered with silver roses, thistles and shamrocks for a banquet. Afterwards she received a long procession of diplomats and Indian princes. She was then wheeled in her chair to sit and watch the fireworks in the garden.”

“Jubilee Day, the 21st of June, was a day ever to be remembered by those who were privileged to be in London, and to witness the royal progress to Westminster Abbey. The day was observed as a national holiday, and fortunately was one of perfect sunshine. Houses and streets were profusely decorated, and the demonstrations of personal affection for the Queen were universal. Tens of thousands of persons lined the thoroughfares, especially along Piccadilly, Pall Mall, Whitehall, and Parliament Street. The gorgeous cavalcade excited intense interest; the brilliant group consisting of the Prince of Wales, the Crown Prince of Germany, and the Crown Prince of Austria, being singled out for special admiration.

Whenever Her Majesty appeared, however, she was the cynosure of all eyes. She drove in State, accompanied by the members of the royal family, and by the foreign potentates and princes who were her guests. The Thanksgiving Service in Westminster Abbey was most impressive. The interior of the Abbey had been completely transformed, so as to afford the largest possible amount of sitting accommodation. An eyewitness of the ceremony thus described the scene in the Abbey, and the order of the service: “King Henry VII.’s Chapel had been shut off, and not a single monument was to be seen anywhere. The Abbey was more like Cologne Cathedral than the Abbey Englishmen know and love so well. At either end—that is to say, above the altar and at the western end of the choir—were two immense galleries crowded with people. On either side of the nave, too, there were galleries filled with naval and military officers and their wives. On the floor in the nave were the Judges, the Lord Mayor, the Aldermen and Common Councilors, and a host of distinguished personages. The Beefeaters kept the line of route here,but they had little to do, for the arrangements were too admirable to make over-crowding possible. The choir was reserved for minor potentates and for the attendants of the kings and princes, who were seated within the rails of the sacrarium. Between the sacrarium and the choir was thje daiis, a wide structure covered with red baize, with the coronation chair in the centre. On the right of the chair the princes who accompanied Her Majesty were to sit, while the princesses were on the left. On the altar was a splendid gold alms-dish and four large bouquets of white lilies. On one side of the dais were members of the House of Lords; on the other, members of the House of Commons, while above the peers was a diplomatic gallery, where a most dazzling exhibition of classes and orders could be seen.

The Abbey, with the exception of the choir and the sacrarium, was full at ten o’clock. It was a most brilliant sight—one which will never be forgotten by those who saw it. The bright hues of military uniforms and the scarlet and ermine of the judges, blended admirably with the white dresses of the ladies. The black lambswool kalpack of Malcom Khan, the Persian envoy, and the fez of Bustem Pasha, the Turkish ambassador, were very conspicuous amid the brilliant throng. The royal children, who composed the first procession, arrived very quietly soon after ten. The Indian princes came about eleven, when Dr. Bridge played the Grand March in B flat by Silas, succeeded by the march from “Lohengrin.”

The Indians formed a magnificent group, blazing in rose diamonds. There were the Thakur Sahibs of Gomdal, of Lieuri and of Moroi, the Maharajah of Kuch Behar, and the Eao of Kutch. Above all was the Maharajah Holkar of Indore, who seemed to be a mass of emeralds and brilliant Almost at the same time the Sultaneh of Persia, Prince Komatsu e Japan, and other Eastern princes were conducted to their places in tin sacrarium, where also the Queen of Hawaii was allowed to have a place. She wore a large number of Hawaiian orders. Then there was a lull until about twelve, when Dr. Bridge struck up Lemmens’ ‘Marche Pontificate,’ to welcome the foreign royalties. The Queen herself had selected this piece. It was a splendid procession. The King of Saxony, who is blind, was led up the aisle by the Crown Prince of Austria and the Grand Duchess of Mecklenburg-Strelitz.

“The kings and princes who passed to the sacrarium did so by side passages; not one of them ascended the steps to the dais where Queen [Victoria and her family alone were to tread. Half an hour more of waiting, and then Sir Albert Woods, Garter King, who was watching at the western door, gave a signal. A voice as of many waters was heard outside, and the State trumpeters, perched aloft on the roodscreen, performed a fanfare on their instruments. The vast crowd of all that is great and illustrious in England rose to their feet. Dr. Bridge played the National Anthem, and afterwards, as the Queen’s procession passed up the nave, a march from the ‘Occasional Oratorio.’ The clergy of the Abbey came first, and behind them were the Bishop of London, the Archbishop of York, the Dean of Westminster, and the Archbishop of Canterbury. After them came the Queen, attended by the princes and princesses of her family. The procession having reached the dais, the Queen took her seat on the coronation chair, and Lord Lathom and Lord Mount-Edgcumbe placed the robes of State on her1 shoulders. She bowed low to the altar just before they did so, and then sat down. At that moment, when the scene was complete, the mise-en-scene was a very striking one.”

So joyous was this occasion, it moved many of England’s artists, writers, and poets to wax on the might and power of Victoria and the British Empire. The following was composed by Poet Laureate, Alfred, Lord Tennyson, to mark the golden jubilee:

On The Jubilee Of Queen Victoria

She beloved for a kindliness
Rare in fable or history,
Queen, and Empress of India,
Crown’d so long with a diadem
Never worn by a worthier,
Now with prosperous auguries
Comes at last to the bounteous
Crowning year of her Jubilee.

You then joyfully, all of you,
Set the mountain aflame to-night,
Shoot your stars to the firmament,
Deck your houses, illuminate
All your towns for a festival,
And in each let a multitude
Loyal, each, to the heart of it,
One full voice of allegiance,
Hail the fair Ceremonial
Of this year of her Jubilee.

Queen, as true to womanhood as Queenhood,
Glorying in the glories of her people,
Sorrowing with the sorrows of the lowest!

You, that wanton in affluence,
Spare not now to be bountiful,
Call your poor to regale with you,
All the lowly, the destitute,
Make their neighborhood healthfuller,
Give your gold to the hospital,
Let the weary be comforted,
Let the needy be banqueted,
Let the maim’d in his heart rejoice
At this glad Ceremonial,
And this year of her Jubilee.

Henry’s fifty years are all in shadow,
Gray with distance Edward’s fifty summers,
Even her Grandsire’s fifty half forgotten.

You, the Patriot Architect,
You that shape for eternity,
Raise a stately memorial,
Make it regally gorgeous,
Some Imperial Institute,
Rich in symbol, in ornament,
Which may speak to the centuries,
All the centuries after us,
Of this great Ceremonial,
And this year of her Jubilee.

You, the Mighty, the Fortunate,
You, the Lord-territorial,
You, the Lord-manufacturer,
You, the hardy, laborious,
Patient children of Albion,
You, Canadian, Indian,
Australasian, African,
All your hearts be in harmony,
All your voices in unison.
Singing, ‘Hail to the glorious
Golden year of her Jubilee!’

Are there thunders moaning in the distance?
Are there spectres moving in the darkness?
Trust the Hand of Light will lead her people,
Till the thunders pass, the spectres vanish,
And the Light is Victor, and the darkness
Dawns into the Jubilee of the Ages.