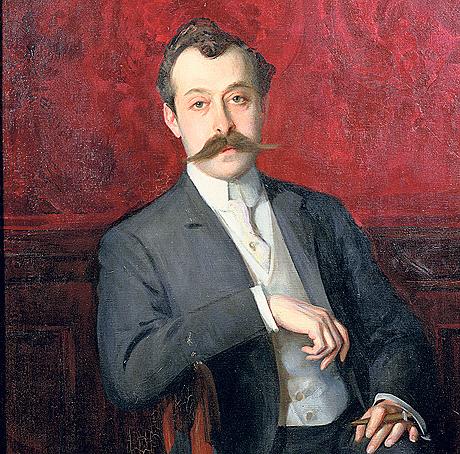 For the British gentleman living at the turn of the century, the world was his oyster. Provided he was sufficiently wealthy, educated in the right schools, in possession of the proper attire, and on intimate terms with the right people, he could do what he liked and go where he liked with little fuss. Last May we covered the typical day of an Edwardian lady, so let’s see how the typical Edwardian gentleman’s day stacked up. According to George Cornwallis-West, “a pleasant bachelor flat in Mayfair could be rented for £150 a year, while the best tailor in Savile Row would make a suit of evening clothes for eleven guineas, and a morning suit for about eight. Dress shirts could be bought for ten and sixpence, and membership of a good club offered both companionship and meals at moderate cost.” The last bit is why the number of gentlemen’s clubs exploded in the late Victorian era, as they provided a refuge for the unattached and the married man.

Pamela Horn’s High Society, focuses on one bachelor in particular, W.H. Mallock, the son of a Devon landed family of moderate means. He came to London for the season, where his mornings were spent writing letters, responding to invitations, and attending other personal matters. After this he strolled through the park with a friend, went to luncheon at two o’clock, attended a garden party that would last most of the afternoon. Dinner was either at a quarter past eight or a quarter to nine, which was followed by two or more “At Homes” (calls on hostesses on their specific days and times), and around midnight, the important balls–and elgible bachelors looked in on more than one–where he danced, ate, and sat under palms with interesting young women. At the end of the season, Mallock spent two months at home in Devon, wintered abroad at the Riviera, and spent the rest of his time visiting friends and relatives in their country houses.

For the gentleman with a profession, life was less leisurely–but not by much. Nouveaux riches did “something in the City”, and though a few hard-up gentlemen joined stock brokerages or other businesses, the recognized occupations for a gentleman were limited to the law, to politics, to the army, and to the church. Civil service exams, reading for the bar, the widening of men’s suffrage, and the abolishing of army commissions led to men being able to rise to good-paying professions on merit, but the gentlemen at the top still possessed the rank and the family ties to dominate the best positions. Their daily life depending on the breadth of their work and their importance, not to mention–for army officers–where they were located, but in general, being in possession of an occupation did not get in the way of the social round, and in fact, the general shape of the season fit around the demands of a politician or an officer in the Guards. All in all, the life of an Edwardian gentleman was cushioned–by servants and the women in their life–from discomfort and disruption, which is why so many were left aghast first by the movement of women into their professional sphere, and then by militant suffragettes!

Further Reading:
High Society: The English Social Elite, 1880-1914 by Pamela Horn
The Pursuit of Pleasure: High society in the 1900s by Keith Middlemas
Social Life in the British Army by William Elliot Cairnes
A Philadelphia Lawyer in the London Courts by Thomas Leaming