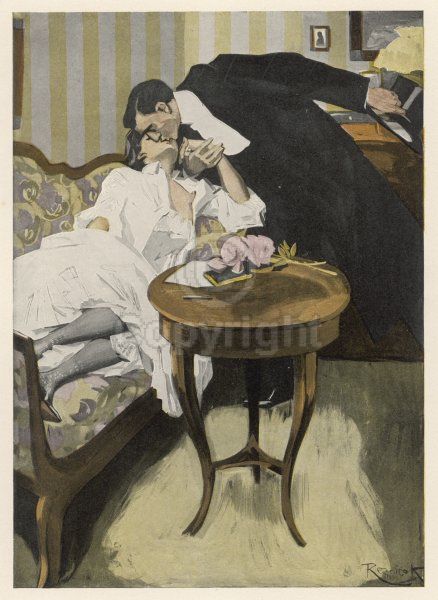 The new silhouette required a much slimmer parcel of undergarments than before, and it was in this period that underclothing took on the sensual connotations of the word “lingerie“. Ornate, overtly sexual and colorful underclothes began to shift away from the boudoirs of courtesans and into the bedchambers of respectable housewives and independent women. Whereas Victorian underclothing had been functional, the sole function of Edwardian underwear was to attract and tantalize men.

Along with the word lingerie used in place of undergarments, other terms changed to reflect the emphasis on seduction; the shift was first called a camisole and then simply known as a “slip” by this period, drawers turning into knickers and petticoats into “frillies“. This was the age of frou-frou, that exciting sound of chiffon and taffeta undergarments that whispered as a woman walked (though by the middle of the era, the sound of a swishing petticoat was deemed vulgar). For the wealthy lady, the proper layer of lingerie was important and the corsetier and couturier one purchased one’s lingerie from was a status symbol, its purchase acknowledging that the lady had a special someone for whom she flaunted her undergarments.

The fashionable woman was poured into at least seven layers of underclothing before she even dressed for the hour! Since they changed clothing five to six times a day, with even more if one was on vacation or at a Saturday-to-Monday, it was imperative that underclothing was both attractive and sturdy. When the lady awoke, her first layer of undergarment were the combinations, a kind of pant and vest in one piece which gained popularity in the 1870s with the introduction of the “Princess style” dress and greatly reduced the bulk that would have accompanied a separate chemise and pantaloons. Generally made of wool or a mixture of wool and silk, they came in a number of styles: strapless for evening wear, or with a skirt in the back to hide the slit in the pants.

Over this was laced the corset. The late Victorian corset fitted over the bosom and hips with curved busks that compressed the stomach and supported the spine, while the S-bend corset of the early Edwardian era, called thus due to the peculiar arch of the back this corset produced,caused women to thrust their bosom forward and their hips backwards to give them the hourglass shape then popular. When skirts and bodices narrowed after 1908, the emphasis was now placed on an overall slimness, and corsets were designed to compress the waist and hips and no longer covered the bosom. They were also quite long, ending at mid-thigh, causing a slight difficulty in sitting and standing.

Next layer, the camisole. A kind of under-blouse that buttoned down the front, it gathered at the waist and was trimmed with lace around the neck and puffed sleeves. This was very fitted, with darts and seaming, and decorated with lace and trimming during the 1880-1908 period, and after, it was made quite plain,often with a square neckline. Over this, a pair of frilly knickers, which sometimes buttoned at the waist or tied with tapes. The last undergarment essential to a lady was the waist-petticoat, made of lawn or rustling silk. It was laid upon the floor in a circle and the lady stepped into the center, the maid lifting the petticoat up and tying it around the waist. Tightly-laced, secured and buttoned up, the lady 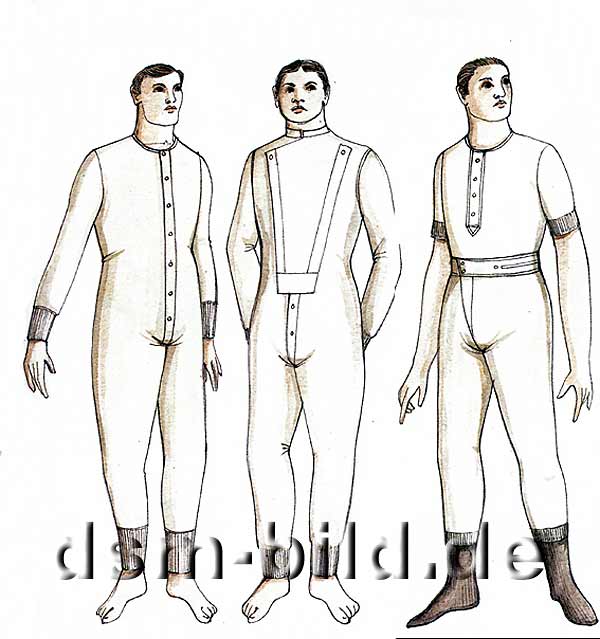 was then ready to be attired for whatever occasion of her day or night.

For men, the union suit, a long-time staple of both men (and women until the mid-19th century), was de rigueur. Made of a knitted material,they possessed a flap in the front and the back for necessary needs. The jock-strap was invented in 1874 by a Chicagoan named C.F. Bennett to provide protection when gentlemen rode bicycles. By the end of the 1910s, the union suit was split into upper and lower parts, inventing the undershirt and drawers for men. Soldiers in WWI were issued underwear somewhat similar to the modern-day boxer shorts and due to its popularity, they supplanted the union suit as the mode of men’s underwear.