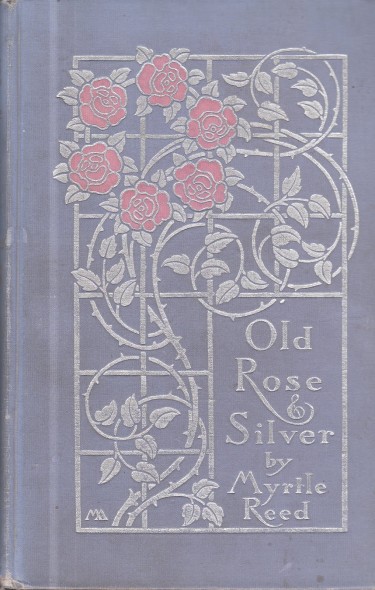 I downloaded Old Rose and Silver before I started Myrtle Reed’s Lavender and Old Lace, back when I thought Lavender and Old Lace was going to be good. And then, I did want to give Myrtle Reed another try, and I thought I might as well get it over with. And as it turns out, she deserved another shot. I mean, I wish she had a better grasp of structure, and there are myriad reasons why she’ll never be among my favorite authors, but Old Rose and Silver was pretty enjoyable about 70% of the time, and I’m chalking that up as a win.

Old Rose is forty-year-old Rose Bernard, who lives with her widowed aunt, Francesca. Francesca was widowed during the Civil War, and has been eagerly looking forward to joining her husband in Heaven ever since. While she waits, she has a reasonably happy life and a slight fixation on shoes. Rose has lived with her for fifteen years, and, while still beautiful, she considers herself pretty far along in spinsterhood, and is a bit sensitive about her age. She’s very much like Eve Martindale in The Silver Dress, only a bit better socialized and a lot more interested in fashion. Also, she plays the piano.

Silver is a new, temporary addition to the Bernard household: Isabel Ross, Francesca’s niece and Rose’s cousin. Isabel is twenty, probably approximately as beautiful as Rose, and eerily similar to the Isabel in The Car Behind. Her primary character trait is selfishness, and she’s also got a disturbing habit of passing off other peoples’ clever remarks as her own.

Then we have the Kents: Colonel Kent is Francesca’s best friend, and Allison is his thirty-year-old violinist son. They return from a number of years abroad shortly after Isabel’s arrival, and it soon becomes clear that Myrtle Reed hasn’t put Allison’s age exactly halfway between Rose’s and Isabel’s by accident. Most of Reed’s opinions on gender roles are a bit icky, but she does use her characters as mouthpieces for a fairly enjoyable rant on the double standard that encourages men to be interested in younger women and not older ones. Anyway, Rose is clearly the right woman for Allison, and they bond over music, to the point where Allison wants Rose to come on tour with him as his accompanist. But just as Rose is beginning to fall in love with Allison, Allison is becoming infatuated with Isabel.

Rose, as I said, is better socialized than Eve Martindale. Isabel…really isn’t. And she hasn’t even got good taste to help her out, as Eve does. Isabel likes Allison because he’s reasonably wealthy and will probably someday be famous and extremely wealthy, and because she’s gratified by his interest in her, and because she knows that Rose likes him and she’s not a very nice person. It doesn’t occur to her that she ought to be in love with him, and she seems a bit confused as to why anyone would think she should care about him at all. So they get engaged, and Allison remains oblivious to the fact that Isabel basically has no feelings, even when she throws the turquoise engagement ring he’s had designed specially for her into a pond and demands that he give her a diamond one instead.

Meanwhile, there are the Crosby twins, Romeo and Juliet. You don’t really need to know much about them except that they’re a joke. Sometimes it’s a funny joke, but mostly it’s a little pathetic. The way Myrtle Reed plays certain characters for comic effect actually makes me kind of uncomfortable. Also uncomfortable? Anything relating to the Crosbys’ car. Suffice to say they get one, and Isabel badgers Colonel Kent into giving her one as an engagement present, and the two cars crash. Isabel, in spite of the way she limps around and complains about her bruises later, escapes relatively unscathed. Allison gets his hand run over. I don’t remember which hand, except that of course it’s the one he needs to play the violin.

So Allison Kent is permanently crippled, and probably ought to have his hand amputated, but that wouldn’t allow for a miraculous recovery, so Colonel Kent forbids anyone from removing the hand and goes off in search of some specialists. It’s a lot like that bit in Pollyanna.

Allison honorably offers to release Isabel from the engagement, but doesn’t actually expect her to accept the offer, and is shocked and appalled when she’s like, “So I don’t have to marry a cripple? Excellent. Thanks!” Everyone else is shocked and appalled, too, and Isabel gets to be vaguely sociopathic and confused as to why people expect her to have feelings some more. Rose, predictably, steps in and encourages Allison not to be mopey, and they secretly decide that they’re going to get platonically married and she’s going to help him write music.

Enter Doctor Jack. He’s young and optimistic and insists that if Allison cheers up and goes for walks, his hand may be saved. And of course it works, and Rose feels like she can’t hold Allison to the engagement once he’s well, so she goes into hiding and he has to go after her, and all the things you think are going to happen do. And there’s more stuff with the Crosbys as well, but we’re not talking about that.

In conclusion: Myrtle Reed’s writing is so patchy. There were some great bits, and some incredibly uncomfortable bits, and I felt like the whole thing needed to be tightened up at the seams. I liked the characters a lot better than the ones in Lavender and Old Lace, and it never entirely stopped making sense, but I stopped caring about most of the characters halfway through. And I’m still a little traumatized by the Crosby twins.