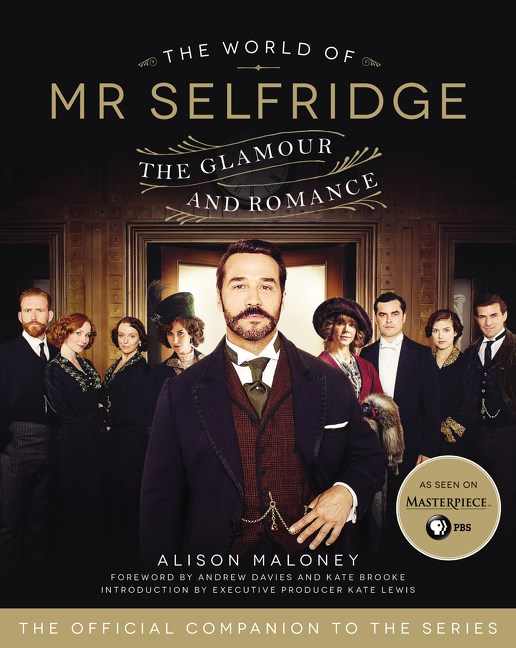 The official, full-color, illustrated, behind-the-scenes companion to the lavish hit ITV and PBS television series Mr. Selfridge that vividly brings into focus the remarkable man and his time

Set at the crossroads between the old and the new—when the Victorian and Edwardian eras gave way to the modern age—Mr. Selfridge illuminates the passions, drama, tensions, and promise of the early twentieth century, embodied in one charming, dynamic, self-made man: department store tycoon Harry Gordon Selfridge.

Mr. Selfridge follows a colorful cast of characters whose lives and fortunes are entangled with the founder of the magnificent department store that bears his name: Selfridge’s. American retail visionary Harry Selfridge moves to London in 1906 with his family to establish the most ambitious department store the world had ever seen. While his dreams inspire many, they also challenge the staid conventions of British society.

A saga bursting with love affairs, class divisions, cultural clashes, ambition, betrayals, and secrets, Mr. Selfridge is set in an era when women reveled in a new sense of freedom and modernity. A charming, dynamic, brilliant, and forceful man who enjoys and respects women, Harry opens the doors of his opulent department story on London’s famed Oxford Street to indulge, empower and celebrate them, changing the way the British—and the world—shopped forever.

Including a foreword by series producer Andrew Davies, this official illustrated companion to the series—the biggest ITV-produced drama of all time—takes fans on a journey through the world of the series, Selfridge’s, and the larger-than-life entrepreneur, husband, lover, and family man behind it.

Rich with historical detail, The World of Mr. Selfridge examines the real man and the fictional character based on him, his relationship with his family, his genius for retail, and his flagship store, including its departments and changing fashions in the early twentieth century.

Complete with hundreds of gorgeous photographs, The World of Mr. Selfridge takes a closer look at the cast and their characters over the first two seasons, and looks ahead to series three, which begins in 1919—when Harry’s life really begins to unravel.

I’d been looking forward to the prospect of a companion book for Mr. Selfridge for a while–after all, Downton Abbey has ten or more thus far if you count the biographies of the Countesses, the script books, and the others along with those written by Jessica Fellowes and Emma Rowley. I was pretty excited when I saw this book late last year on Amazon UK. Since there was no US release date until about mid-summer, I own the UK version I purchased from overseas in the spring.

The table of contents reveals a book that takes readers through every part of Harry’s lavish Edwardian life and times. Beautiful photos cover almost every page–stills from the show and of real life people and places. I am an interior design and marerial culture geek, so I loved the parts about the sets.

For those of you who want to know how Selfridge’s was run in the Edwardian era, there is a two page organization chart of the store’s employees. It really widens the scale of whom characters like Mr. Grove had to be responsible for. Interviews with the cast deepen the knowledge about their lives, as well as the lives of the types of Selfridge’s employees they represent. Agnes Tower is my favorite character, so the section devoted to her was of particular interest!

But my favorite favorite part of this book–remember, material culture geek–is the second half of the book: a tour of the department store. Starting with cosmetics, which Selfridge’s defined, we learn about the 1900s cosmetic industry, labels, bottle design, and how makeup was worn. The section on how to achieve Lady Mae’s look is amazing.

The fashion department section is full of swoonworthy Edwardian and 1910s designs. The attention to detail taken by the costume designer James Keast…magnificent. Did you know that Harry’s ties come from Keast’s own wardrobe? The Accessories department is just as beautiful.

The Palm Court section features set menus and real life menus from the Selfridge’s restaurant. I want to try the delicious Russian salad described in the chapter!

Last but not least, the making of Mr. Selfridge concludes the book. From the soundstage set to the exteriors, the effort it takes to make us believe we’ve gone back in time is an achievement. Bravo to the cast, the writers, and the crew!

0 replies on “REVIEW: The World of Mr. Selfridge by Alison Maloney”