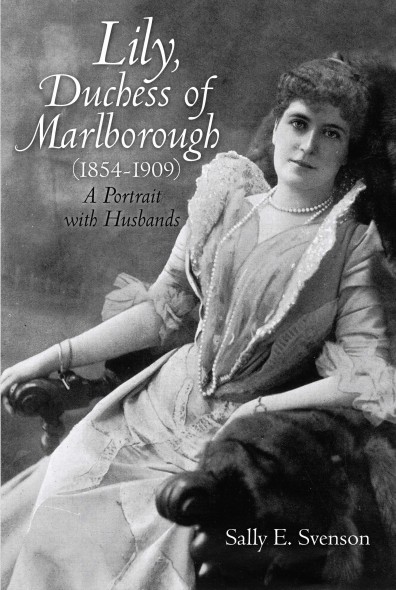 Lily Price Hamersley became, with her 1888 marriage to the eighth Duke of Marlborough, the highest-ranking peeress in England and the first American duchess in fifty years.

The duke was one of three distinguished but, alas, short-lived husbands of this beauty from Troy, New York. Her fist husband, Louis Hamersley, was a patrician New Yorker who left Lily an affluent widow at the age of twenty-eight. Her second, the “wicked,” divorced, and socially outcast Duke of Marlborough, was brother-in-law to Jennie Churchill, uncle to Winston, and father-in-law to Consuelo Vanderbilt. Lily’s third husband was an ebullient Anglo-Irish lord, William de la Poer Beresford, a horseracing enthusiast whose popularity has been likened to that of modern film stars. In the course of a surprising life, Lily knew triumph and heartbreak while proving herself a woman of self-confidence, optimism, and remarkable resilience.

Even though her fortune went a long way towards stemming the decline of the Marlboroughs before Sunny, her step-son, married Consuelo Vanderbilt in 1895, Lily Price Hamersley is the forgotten Duchess of Marlborough. She is often treated as a footnote in biographies of her in-laws and step-relations, but despite her husband Blandford’s (the 8th Duke) neglect, and she her marriage to Lord William Beresford after Blandford’s death, she was a vital part of the Spencer-Churchill family and she formed a special attachment with a young Winston Churchill.

You can imagine my surprise and delight when Sally Svenson contacted me to share the news of her biography of the long-forgotten 8th Duchess of Marlborough (and dollar princess). I’m about a third of the way through the book, but so far, it exceeds my expectations and really digs deep into the life of this plucky New Yorker. It also comes with some pretty nifty endorsements:

“There is a unique flavor to Lily’s experience that had little equal in her era. Her three marriages, her confident ease in moving into impossibly complicated and exalted social realms, and her decades of dealing with legal complexities related to wills, estates, and trusts make her story read like a newly discovered Edith Wharton novel. The history of the fairytale years when Lily became the Duchess of Marlborough and a dear friend of Winston Churchill is immensely readable and fascinating.” — Eric Homberger, emeritus professor of American Studies, University of East Anglia, and author of Mrs. Astor’s New York: Money and Social Power in a Gilded Age

“This entrancing portrait of a conventional American girl who made three extraordinary marriages draws on society papers and women’s magazines as well as archives, court records and private papers to create a lively and vivid picture of social elites on both sides of the Atlantic during the late nineteenth century.” — Sally Mitchell, author of Daily Life in Victorian England and The New Girl: Girls’ Culture in England, 1880-1915

“Fascinating! The 8th Duke of Marlborough has been generally dismissed in the past as being an unimportant figure in the Churchill family’s illustrious history, but . . . this book goes a long way in re-establishing his reputation, and reveals the importance of his marriage to Lily in the renewal of Blenheim Palace.” — Jeri Bapasola, archival researcher at Blenheim Palace

The book is available for purchase at Amazon.com, where you can also peek inside, and B&N.