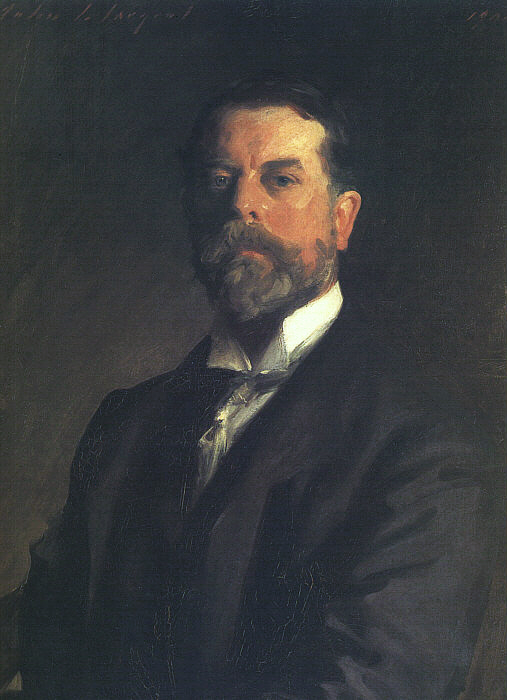 No one looking at the deft and sensitive renderings of the Edwardian era’s wealthy and blue-blooded society would think that John Singer Sargent found portraiture tedious. Yet, had it not been for Sargent’s excellence we would be cheated of his art and of understanding the growth of conspicuous consumption that characterized the lifestyles of the rich and famous of the 19th and early 20th centuries. For that is what a portrait painted by Sargent was—a display of wealth, class and breeding. Nouveaux riche families aspired for landed estates and possibly titles, but they needed the art and treasures to legitimize their new social status. After American and Industrial millionaires ransacked the castles, chateaux, villas, palaces and Schlösser of impoverished aristocrats for priceless art, furniture and furnishings, they turned to John Singer Sargent to detail their ascent up the social ladder in gorgeous detail.

Though Sargent was American by nationality, he was Italian by birth, being born to American parents in Florence, Italy in 1856. He remained loyal to his American heritage, but his formative years were spent in Europe, which gave him a dual outlook (which I find transfers through his paintings; there is a sense “outsiderness,” of emotional distance between he and most of his subjects). Due to his mother’s invalidism, the Sargent family lived like vagabonds across Europe, which prohibited John from obtaining a formal education, but it didn’t prohibit him from exercising the artistic talents he inherited from his parents.

Despite this, Sargent’s art studies were largely self-taught during his formative years, and when he moved to Paris to study under Carolus-Duran, he turned out to be the famed artist’s star pupil. He focused initially on landscapes, but Carolus-Duran’s emphasis on portraiture—as well as the more lucrative positions portrait artists received—influenced Sargent’s foray into painting subjects. His first portrait, as well as his first entry to the Paris Salon, was of Fanny Watts in 1877, which was very well received. It was, however, his bold and aggressive painting of his mentor Carolus-Duran that cemented the direction Sargent’s career would take. 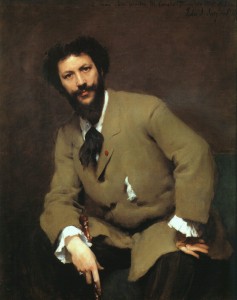 After leaving Carolus-Duran’s atelier, Sargent traveled to Spain, where he soaked up the tragedy and romance of the country, as well as its music and dance. His most expressive and beautiful painting from this period is El Jaleo, a twelve-foot wide canvas depicting a Spanish woman dancing before an accompanying band. Commissions greeted him upon his return to Paris, and he entered his sensuous period, highlighted by the then-scandalous (and nearly ruinous) portrait of Madame Pierre Gautreau (Madame X). This scandal put a definite halt to his career in Paris, and Sargent transferred his atelier to London, where he painted landscapes of the English countryside and for the first time, touched upon the principles of the Impressionists. 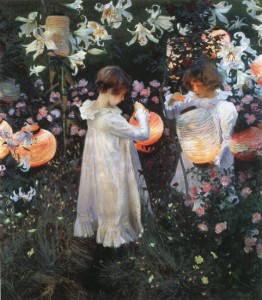 Sargent had laid the groundwork for his career in London in the early 1880s, but critics were initially cool towards his paintings. After dickering around the countryside in the wake of the Madame X scandal, he began to paint portraits again, and he burst onto the English art scene in 1887, with Carnation, Lily, Lily, Rose, a sweet if gentle painting of two young girls lighting paper lanterns in the summer twilight. That same year Sargent set off for America, visiting his mother country for the first time in his life. During his time in Boston he made a connection with his most important champion and patroness, Isabella Stewart Gardner, a famed art collector. Back in London his career entered into a new phase as portrait artist to the wealthy, well-born, and famous. His methods were systematic, unique and economical: he would first visit his client at home to see where the portrait would possibly hang and would review their wardrobe for suitable attire. He either painted in his studio or at the client’s home, and required up to ten sittings, though he would try to capture the face in one. Unlike his peers, Sargent did not sketch on the canvas in pencil, and painted in oil (!!) directly. His sittings were entertaining, as Sargent believed in keeping his subject relaxed and agreeable; he would sometimes play the piano, but always kept up a light patter of conversation while painting. So respected and revered was Sargent, he could command $5,000 per portrait. 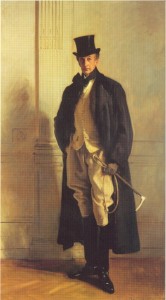 The 1890s and early 1900s were the height of his fame. He traveled between England and the United States, where he painted portraits of the latter country’s most influential people, including Presidents Theodore Roosevelt and Woodrow Wilson. His most ambitious project was a commission by Asher Wertheimer, a wealthy London-based art dealer, who wanted a series of family portraits. One of his last major portraits was of the ultra-aristocratic Lord Ribblesdale, whose arrogant pose in slightly rumpled hunting gear was the very image of the “English milord.”

Sargent closed his studio for good in 1907, remarking, “Painting a portrait would be quite amusing if one were not forced to talk while working…What a nuisance having to entertain the sitter and to look happy when one feels wretched.” From then on, he traveled and painted landscapes, even residing in the United States for a year. He painted John D. Rockefeller in 1917, but the rumblings of change in the art scene were upon him, and his work was consigned to the “past,” and was even criticized as being out of touch by Cubists and Futurists. Sargent painted his final portrait of Grace Curzon, the second wife of the Marquess Curzon of Kedleston in 1925, shortly before his death at age sixty-nine.

However much he was criticized by the end of his career, Sargent had the triumph of attaining lasting and lucrative fame while alive, and even as his portrait painting petered out, his art work remained highly-sought after and it was a source of pride to just own an original Sargent painting or sketch.

2 thoughts on “Portrait of an Artist: John Singer Sargent”