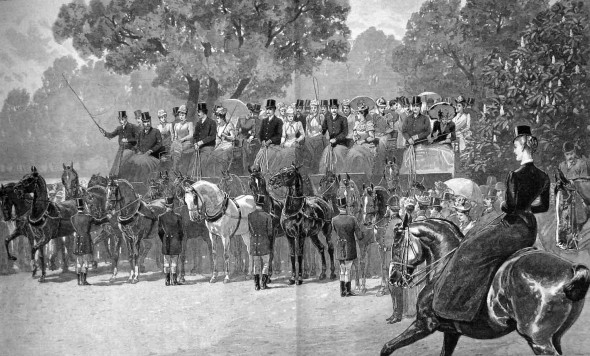 A singular ceremony is repeated at intervals during the London Season, which may be regarded as one of the most successful efforts of the kind yet invented. On a given morning (usually in the week before the great Epsom race), shortly after noon, some twenty splendid equipages belonging to members of the Four-in-Hand or Coaching clubs muster in Hyde Park. These are the representative English driving clubs, founded on the lines of an old and exclusive club which used to start from Chesterfield House, Mayfair, and drive down to Bedfont. The leaders of this club were Lord Chesterfield, Sir Henry Peyton, and the Duke of Beaufort. Its members might drive down visitors, but could not dine them at the club table. Consequently guests (as eating and drinking play an important part in all social gatherings in England) would not come, and the pastime subsided into dreariness.

To remedy this, the Richmond Driving Club was soon started. The Richmond Club members invited guests to their dinner-table, and thus escaped the charge of unsociability brought against the old club driving to Bedfont. But the Richmond Club died out, and then coaching seemed to be on its last legs. Only one coach went out of London from Hatchett’s; and very few drove four-in-hand even down to the races. Then a revival sprang up in the founding of the present Four-in-Hand Club, which was originally limited to fifty members, who on grand occasions used to turn out some twenty-four teams. One reason for this limitation was, that it was difficult to find places within convenient distance of London to give dinner or luncheon to more than a hundred persons. There was no idea of exclusiveness ; but as the coaches had to be driven somewhere, and to carry guests, the latter had to be entertained. The founding of the Coaching Club was the result of this limitation of members by the older and more famous club.

The coaches of these clubs are built on the model of the old mail-coaches of fifty years ago, and therefore answer the purpose of being useless except for show. Each of them costs perhaps £500, and to each are harnessed four magnificent horses worth at least another £1,000. Upon these wait two grooms in faultless breeches, top-boots and coats, neither of whom stands there under £8o to £100 a year. When all are mustered the coaches start (with a number of “swells” seated outside) with becoming solemnity, and oftentimes no little difficulty, and make the tour of Hyde Park, some perhaps going as far as Hurlingham or the Crystal Palace to lunch. One would have thought that this absurd and useless “ceremony” could have little interest save for the distinguished members of the clubs and their friends. Yet year after year it attracts thousands of spectators, who are massed in the vicinity of the Powder Magazine, Hyde Park, and at other points upon the line of route. A picture of these parts of the Park on a morning of one of the meets would somewhat astonish an earnest-minded foreigner bent on studying the manners of the English. A far more sensible affair is the Cart Horse Parade in Battersea Park on Whit Monday.