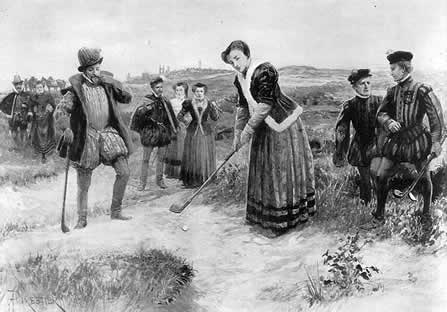 The Edwardian era saw the growth of golf into a worldwide sport. Despite a brief entry into English consciousness in the 15th and 16th centuries, the game became wildly popular outside of Scotland when Englishmen founded the Royal North Devon Club at Westward Ho! in 1864. There were golf clubs in Britain before this–and indeed the first golf course was St Andrews in Fife (est circa 1506)–but they were founded by Scotsmen for Scotsmen, retaining the sport’s insular popularity. After the foundation of the Royal North Devon Club, the sport of golf spread throughout England and beyond, into the United States.

Golf’s overwhelming popularity was sparked by the obsession of the Anglo-Scots politician, Arth

ur Balfour. Though he came to the game late in life and was actually never a very good player, he nonetheless destroyed the image of golf as being an old man’s game and replaced it with the image of a sport suitable for relaxation for a busy man. The other influence for the avid playing of golf was the sheer skill shown by Scottish players in the 1880s and 1890s, whose methods were then adopted by American and English golf players. Fittingly, in Scotland all classes of people continued to play golf, whereas in England and especially America, it became aligned with the idle rich. By the turn of the century, there were hundreds of golf links dotting the British and American landscapes, and in the latter country, the rise of golf coincided with the development of the country club.

Between the years 1894 and 1914, the “Triumvirate”–Englishman J.H. Taylor, Scotsman James Braid, and Channel Islander Harry Vardon–dominated the open championships, raising the bar for sportsmanship to inhuman levels. This also translated to the skill level of women. Ladies played golf in Scotland but it spread more rapidly in England and especially in London where, in 1893, the Ladies Golf Union was formed. The best women golfers at the beginning of the century were in Northern Ireland, chief among them May Hazlet and Rhona Adair, who won five English and nine Irish championships between 1900 and 1908. Dorothy Campbell (Mrs. Hurd) was equally a dynamo, winning the Scottish women’s championship three times and the British twice. She then moved to America where she won the American National twice and the Canadian Open three times. The most important women golfers of the Edwardian era were Lottie Dod and Cecil Leitch. Dod came to golf from a background in tennis, where she had won the women’s singles lawn tennis championship at Wimbledon five times. She was also an international hockey player and the best woman archer in Britain, making her a pioneer figure in British women’s sport. Leitch played golf from childhood and set a new standard of iron play for women. 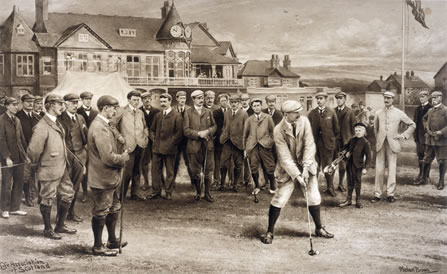 The development of the sartorial side of golf arose after the sport spread beyond Scotland. When American players first came to play on British courses they caused a great degree of interest by appearing on the links without their coats and vests and played in nothing but shirtsleeves and suspenders. The old guard looked upon this attire with disapproval, believing the correct garb in which to play golf was a heavy tweed suit. A middle ground was reached, though Americans continued to play coatless, with a pair of tweed knickerbockers, golf coat with pleats to allow movement, and a tweed cap. Ladies were warned in their golf books from donning “mannish” attire as ties, bloomers and caps, but the majority conformed to notions of femininity and went out to play in heavy tweed skirts, straw boaters and thick, sprigged boots. Despite this, many saw golf as an emancipator for “none of the pre-golf pasttimes led their devotees so far afield or brought them together in such numbers as golf has done.”

Further Reading:
Edwardian England, 1901-1914; ed by Simon Nowell-Smith
Ladies’ Golf by May Hazlet
The Book of Golf and Golfers by Horace Gordon Hutchinson