Newport, known as the Queen of Resorts, or as Elizabeth Drexel Lehr stated ironically in her memoirs: “the very Holy and Holies, the playground of the great ones of the earth from which all intruders were ruthlessly excluded,” was transformed each summer for the sole and very conspicuous consumption of New York’s most exclusive society. Entree into this tiny kingdom by the sea was highly sought after, and nothing–not wealth, lavish entertainments, nor even making a splash in the highest European circles could crack this nut–as the grand doyenne of Chicago society, Mrs Potter Palmer, soon discovered when she made her first foray into the city. But Mrs Palmer was made of sterner stuff and she kept battering the gates of social recognition until the Mrs Astor had to acknowledge her Midwest counterpart. Many others, however, were not so determined nor so successful in their attempts to enter Newport society, and defeated and with lightened pockets, they were apt to sail away to more congenial climes, perhaps even Narragansett Pier, a smart Rhode Island city, though not as smart as Newport, of course. 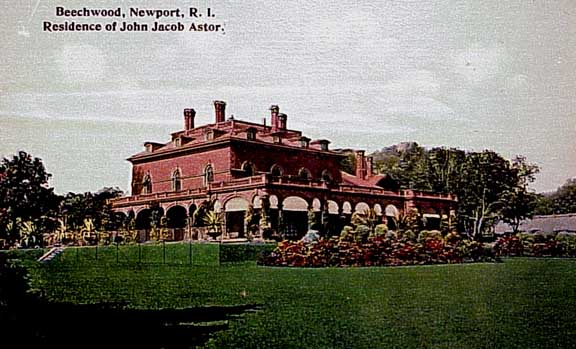 Prior to the early 1880s, Newport was a sleepy town whose charm lay largely in its agreeable climate and quaint Georgian air. Prior to the Civil War, Southerners journeyed north to Newport to escape the sweltering heat of their summers and did not disturb the genial air blanketing the city. A small but recognizable number of wealthy elites from other cities began to arrive in Newport, also attracted by the weather, and built the first mansions–but these were simple and modest, as native Newporters frowned on ostentatious display. Mrs August Belmont, a member of the Four Hundred, attempted to recreate the social milleu of New York but it wasn’t until Mrs. Astor, at the urging of Ward MacAllister, summered there that Newport officially arrived for the Four Hundred. The Astors purchased Beechwood in 1881 and promptly spent $2 million renovating it to their standards. Following in their steps was Alva Vanderbilt who in 1888 was given carte blanche to design and build a Newport estate by her husband as a birthday present. She hired Richard Morris Hunt and mischievously erected a tall wall around the construction site to keep away prying eyes. Marble House cost $11 million to build and furnish and Alva threw a ball to celebrate the completion of her “cottage” in 1892. 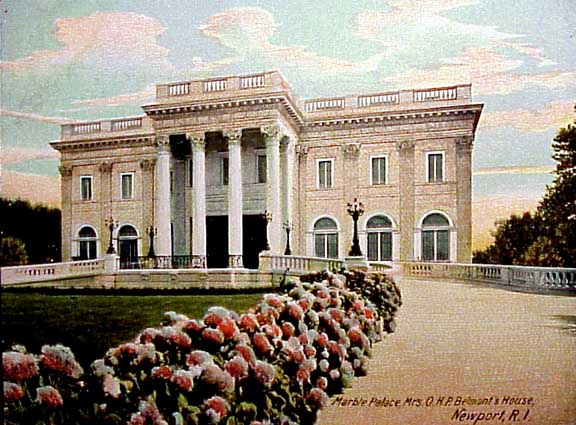 Just as the Vanderbilt mansions on upper Fifth Avenue sparked a rush to build magnificent mansions to replace the declasse brownstones of yesteryear, Alva’s Newport cottage was a gauntlet thrown to others, including her own brother-in-law, Cornelius Vanderbilt, who commissioned Richard Morris Hunt to build a mansion even greater than Marble House. This was The Breakers. The ground was broken in 1893 and two years and seven million dollars later, Cornelius threw open the doors to this seventy room mansion to the awe of everyone. The Breakers stood on 13 acres of land at Ochre Point and faced the ocean, whose spray and crashing surf provided a dramatic backdrop to this impressive “cottage.” Joining Beechwood, Marble House, and The Breakers were other magnificent cottages such as Chateau-sur-Mer, The Elms, Rosecliff, Belcourt Caste, Ochre Court and Rough Point. These mansions and the accompanying wealth surrounding them completely changed the tone of Newport. Now, the city was all about the very, very rich. 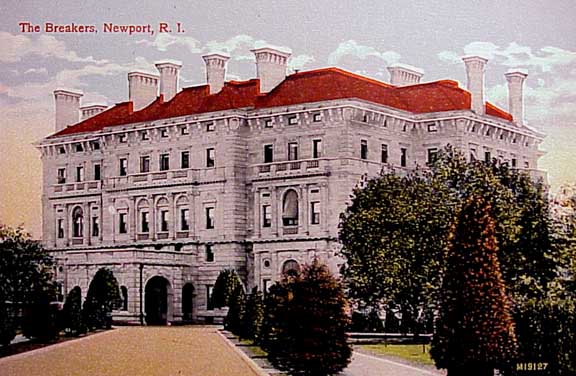 Though the only hotels in Newport were for the lodging of salesmen from Tiffany, Mumms and other purveyors of luxury items, it was quite easy to “crash” the city, and the year-round inhabitants kept the Four Hundred from total exclusivity. To mitigate unwanted persons from mingling with them, a number of financial hurdles were erected, such the rather steep fee of keeping up appearances. For example, one could buy membership to the Newport Casino for $500, but keeping up appearances afterward was a pill for it was not unknown for an average “cottager” to spend $25,000-$40,000 on staff and maintenance of their residence alone. Women were expected to have on hand 80-90 new dresses, as no one ever wore a dress twice, and an entertaining budget of at least $150,000! And gentlemen weren’t exempt for Newport was one of the principle yachting centers in America, as the America’s Cup sailed annually in the vicinity, and the costs of buying and outfitting a yacht could run into the hundreds of thousands of dollars, minus the cost of keeping the boat in tip-top shape.

Stamina was also a requirement for the schedule was grueling and tightly regulated: 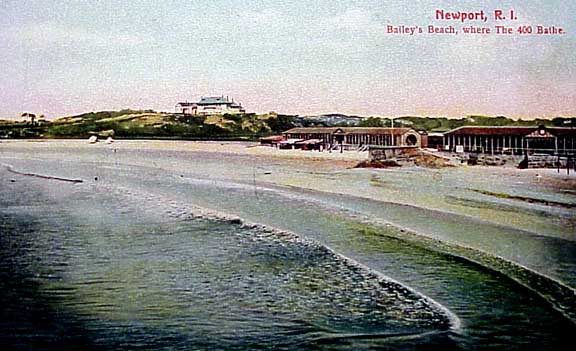 8-9 am: Breakfast. Change into riding habit
9-10 am: Morning ride. Change into day dress and drive in a phaeton behind a matched pair to the Casino, or to shop.
11-noon: Swimming at Bailey’s Beach.

According to Elizabeth Drexel Lehr, “Only the elite could bathe at Bailey’s Beach. It was Newport’s most exclusive club. The watchman in his gold-laced uniform protected its sanctity from all interlopers. He knew every carriage on sight, fixed newcomers with an eagle eye, swooped down upon them and demanded their names. Unless they were accompanied by one of the members, or bore an introduction from an unimpeachable hostess, no power on earth could gain them admission. If they wanted to bathe, they could only go to Easton’s Beach—’The Common Beach’ as the habitues were wont to call it. There they would have the indignity of sharing the sea with the Newport townspeople, referred to by Harry Lehr [her husband], who was fond of quoting the sayings of Louis XIV, as ‘Our Footstools.'”

Noon-2 pm: Luncheon on yacht or picnic on a local farm
2-3 pm: Drive to Polo Field to watch a polo match from carriage
3-5 pm: Promenade in carriage down Bellevue Avenue. Cards are left.
5-8 pm: Tea on lawn or terrace. Change for dinner
8-10 pm: Dinner on yacht, or supper before the weekly Casino dance, to which tickets are sold for $1 to spectators
10 pm-early morning: Dances, cultural offerings, theme balls with second supper at midnight and breakfast as dawn breaks over Sakonnet Point

With such tightly-restrained gaiety, it’s a given someone would break out to lessen the monotony, and for the staid Newport schedule, Harry Lehr and his Triumvirate, of whom Mrs. Stuyvesant Fish was his prime cohort, were at their service. Horseback dinners and Little Egypt scandals aside, it was in Newport that many of the Four Hundred’s grossest indulgences were, well, indulged in. Mamie Fish treated Gilded Age society as a plaything, establishing her modus operandi early on by declaring “I’m so tired of being hypocritically polite,” and was known for kicking her guests out of her home when she grew tired of them (accordingly, her invitations were highly sought after). With Harry Lehr at her side, the two terrorized Newport society, throwing dogs dinners, servant suppers and monkey fetes. So notorious were their antics, the more conservative members snubbed them–but that didn’t stop Mamie or Harry one bit. A particular antic that survives in the annals of history involves Grand Duke Boris of Russia who came to America at the invitation of Mary Goelet. Mamie announced a ball at Crossways in honor of the Grand Duke and purposely excluded a favorite of Mrs Goelet’s from the guest list. Mary retaliated by letting it be known none of her friends would attend. Mamie refused to be checkmated and turned to Harry for advice. When guests arrived at the Fish residence they were informed that Mamie’s guest of honor was Tsar Nicholas II! The eager guests bowed low when the doors were thrown open to announce the entrance of His Imperial Majesty–Harry Lehr dressed as a Tsar! Everyone had a great laugh over this, including the Grand Duke who met Harry the next day to crown him King Lehr.

When the summer ended so did the season, though after the turn of the century a few socialites stayed on into the early fall, and the Four Hundred moved on to its next social enclave. This jewel in the crown of New York society began its slow descent by the outbreak of WWI and though it retained prominence as the social resort, the new generation of idle rich found the Gilded Age mansions rather cumbersome and outmoded. Thankfully many of these outstanding mansions remain standing and available for tours to retain an appreciation for American social and architectural history.

Further Reading:
A Season of Splendor: The Court of Mrs Astor in Gilded Age New York by Greg King
Newport Villas: The Revival Styles 1885-1935 by Michael C. Kathrens
Wicked Newport: Sordid Stories from the City by the Sea by Larry Stanford and J. Bailey
The Golden Summers: An Ancient History of Newport by Richard O’Connor
The ultra-fashionable peerage of America by Charles Wilbur de Lyon Nicholls
This Fabulous Century: 1900-1910 by The Editors of Time Life
To Marry An English Lord by Gail MacColl and Carol McD. Wallace
Baedeker’s United States, 1909 by Karl Baedeker
Class and Leisure at America’s First Resort
The Newport Postcard Museum