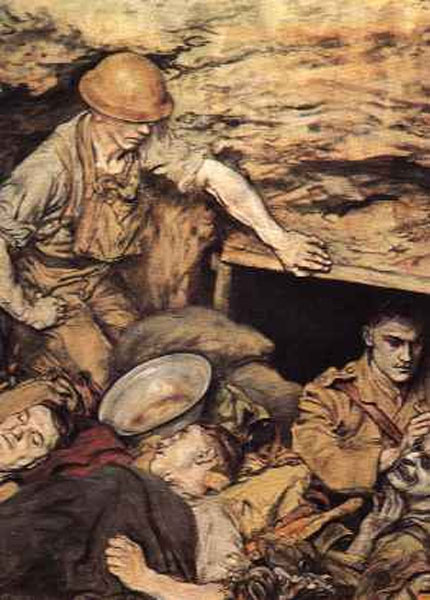 Spiritualism experienced a resurgence during WWI and immediately afterwards. A given since the world was shrouded by death and destruction for nearly five years (including the Spanish Flu epidemic). In his book, Psychical Phenomena and the War, Hereward Carrington, a psychic investigator, attempts to explain and expound upon the forces–material and immaterial–that emerged from the war. The following are a few excerpts from a chapter titled “Apparitions and Dreams of Soldiers.”

A very touching story was told me by a Bournemouth wife. Her husband, a sergeant in the Devon, went to France on July 25, 1915. She had received letters regularly from him, all of which were very happy and cheerful, and so she began to be quite reassured in her mind about him, feeling certain that whatsoever danger he had to face he would come safely through.

On the evening of September 25, 1915, at about ten o’clock, she was sitting on her bed in her room talking to another girl, who was sharing it with her. The light was full on, and neither of them had as yet thought of getting into bed, so deep were they in their chat about the events of the day and the war.

And then suddenly there came a silence. The wife had broken off sharply in the middle of a sentence and sat there staring into space.

For, standing there before her in uniform, was her husband! For two or three minutes she remained there looking at him, and she was struck by the expression of sadness in his eye. Getting up quickly she advanced to the spot where he was standing, but by the time she had reached it the vision had disappeared.

Though only that morning the wife had had a letter saying her husband was safe and well, she felt sure that the vision foreboded evil. She was right. Soon afterwards she received a letter from the War Office, saying that he had been killed in the Battle of Loos on September 25, 1915, the very date she had seemed to see him stand beside her bed.

At daybreak on the next morning, Easter Sunday, about 24 hours after his death took place, when I was lying half awake and half asleep, I had the vision or dream, an account of which follows.

I saw two soldiers in khaki, standing beside a pile of clothing and accoutrements which, in some way, I knew to be Alec’s, and my first feeling was one of anger and annoyance that they should be meddling with his things, for they were apparently looking through them and arranging them. Then one of them took up a khaki shirt which was wrapped around something so as to form a kind of roll. He took hold of one end of it and let the rest drop so as it unrolled itself and a pair of heavy, extremely muddy boots fell out and banged heavily on the floor, and something else fell which made a metallic jingle. I thought “That is his revolver,” but immediately afterwards thought. “No, it is too light to be his revolver, which would have made more of a clang.”

As these things fell out on to the floor the two men laughed, but a sad wistful kind of laugh with no semblance of mirth in it. And then the words, “Alec is v dead and they are going through his kit,” were most clearly borne in on my mind. They were not spoken and I heard no voice, but they were just as clear as if I had done so. And then I became fully awake, these words repeating themselves in my mind and with the fullest conviction of their truth which I never lost. I suppose I still tried to persuade myself that it might not be true, but it was useless and when the official telegram arrived it only confirmed what I already knew.

The following case was first brought to our notice by a paragraph in the daily press on June 6, 1916, in which it was stated that:

The sister of Seaman George William M , of Peterborough, one of the men who went down with the Queen Mary, had a realistic dream last Wednesday (the day the Queen Mary was lost). She was lying ill in bed when she thought that her brother came to her bedside, and although she spoke to him repeatedly he would not answer. He appeared quite well and happy.

Subsequently, in reply to enquiries, we received the following account from the percipient, Mrs. B:

June 19, 1916. … In reference to my dream—as it was published in the papers, but it was not a dream, it was a vision. I was very ill at the time. It was the afternoon of the day of the battle that I saw my brother. I was taken worse and thought I was going to die. I was with my brother on his ship and thought he was so happy and singing, and then it changed and he was at home on leave. I thought I repeatedly spoke to him each time but he did not speak to me. I knew I was ill, and thought he would not speak to me because I was disfigured. I asked my mother if he had gone back and she said he had not been home. I said I knew he had, it seemed so real. I was very much upset because he would not speak to me. I did not hear of the sinking of the Queen Mary until a week after, as I was too ill for my mother to tell me. … It would be just about the time when the ship went down that I saw my brother, as it was late in the afternoon on Wednesday, May 31.

“It was during the great war, my fiance was a soldier in the Army of the Ehine—if I do not mistake— and for a long time we had had no news of him. During the night of the 23d of August I had a singular dream which tormented me, but to which I did not attach much importance. I found myself in a hospital ward, in the midst of which was a kind of a table on which my fiance was lying. His right arm was bare, and a severe wound could be seen near the right shoulder; two physicians, a Sister of Charity, and myself were near him. All at once he looked at me with his large eyes, and said to me: ‘Do you still love me?’ Some days later I learned from the mother of my fiance that he had been mortally wounded in the right shoulder, and that he had died on the 23d of August. A Sister of Charity who had nursed him was the first person to tell us of his death. The impression is still as vivid in my mind as though I had dreamed it only yesterday.”

There is a popular belief that between twins there exists at times an affinity which surpasses the normal. The following experience of twin brothers, while both were engaged in serving their country, would seem to indicate that there are grounds for this belief.

A certain corporal, who was with his regiment at a home station, had been very anxious for some time about his twin brother who was fighting in France. He had not heard from him for some weeks, and as he had been a fairly regular correspondent, this worried him a great deal.

One night he was awakened from a deep sleep by the sound of his name being spoken; he sat up in bed and listened, but the call was not repeated.

And then, as he looked across the room, in the semidarkness he saw quite plainly his brother sitting on his trunk, which was near the door. Too surprised to pause to reason how he could have got there, the corporal jumped quickly out of bed to greet him, but as he approached the spot the apparition had vanished. All the rest of the night he tossed and turned in his bed, for he could not sleep. He had the feeling that his brother was in danger. Next morning he related his experience to his landlady, and also mentioned it to his mother when he wrote home. As at the time he was suffering from dyspepsia and overstrain his friends put the vision down to “nerves.” They were of very different opinion, however, when a few days later the corporal received a field postcard from his brother, stating that he had been wounded at the Battle of Loos, at the very hour when he had seemed to see him sitting on the box in his room.

4 thoughts on “WWI Wednesday: Psychical Phenomena and the War”