The four years of the First World War accelerated the progress of aviation faster than the eleven years between the Wright Brothers’ first flight and 1914. At the end of the war, not only were there numerous aviators without anything to do, but there were numerous airplanes left idle now that there were no Germans to strafe over the Western Front. Flight naturally became even more of a sport in the early 1920s, and it also encouraged aviators to push the limits of flight (transatlantic challenges), but many others saw its commercial potential.

As early as August 1919, Aircraft Transport & Travel began its aeroplane service from London to Paris. Its innovation was soon followed by Handley Page Transport Litd, who also opened up service from London to Brussels. The following year, the Instone Air Line, which had been founded in 1919 as an aeroplane shipping company, established its own London to Paris line. The following schedule is found the 1920 edition of The Blue Guides: England:

These services start at present from Waddon Aerodrome (Waddon station on the L.B. & S.C. Railway), near Croydon, S. of London. The Paris services fly to and from Le Bourget Aerodrome (Bourget station, on the Grande Ceinture), N.W. of Paris; the Brussels service to and from Evere Aerodrome , N,E. of Brussels (half-an-hour’s cab-drive from the city).

Paris Service of the Aircraft Transport & Travel Co. daily both from Waddon and from Le Bourget, at 12.30 p.m. The flight takes about 2 1/4 hrs. and the fare is £21 (return £42). Luggage allowance, 15 lb. The Airco machines on this service carry 2 or 4 passengers.

Paris Service of the Handley Page Co. from Waddon on Tues., Thurs., & Sat. at noon, returning from Le Bourget on Mon., Wed., & Fri. at noon. The flight takes about 3 hrs., and the fare is £15 15/ (return £31 10/). Luggage allowance, 30 lb. — On the intermediate days the service is maintained by Breguet machines (3 passengers) of the French Messageries Aeriennes (2 Rue Galilee, Paris).

A regular air-service between Hounslow and Amsterdam (Soesterberg Aerodrome; in 3£ hrs.; fare £21) is being organized by the British Aerial Transport Co., and other schemes for overseas services to the Continent have been mooted.

In his 1921 book, Whispering Europe, Everit Bogert Terhune briefly describes his trip from Paris to London in an airplane:

“I flew with my family and baggage from Paris to London in two hours and twenty-five minutes, a journey that requires a full day or night by train and boat under ordinary circumstances. We lunched in Paris at one o’clock; taxied to the Instone AirLine Aerodrome shortly after three, had our baggage and passports inspected and started for England at five minutes of four. We walked into our hotel near Piccadilly Circus at seven o’clock and had our dinner. It was safe, clean, pleasant, exhilarating, reasonable in cost—and speedy.

I am for it. After you have had a taste of it you will believe it is the only way to travel. We invented the machine. Where are our air lines between Boston and New York and Chicago and Washington? Nowhere—John Bull, the plodding and persistent, has beat us to it. I anticipate a trip across the Atlantic within the next 24 months from America to England, but not on an American line.”

He was right. This 1921 advertisement from Thomas Cook & Son (they kept abreast of all new modes of travel!) lists both commercial flights within the United States and the Britain-to-Europe flights. 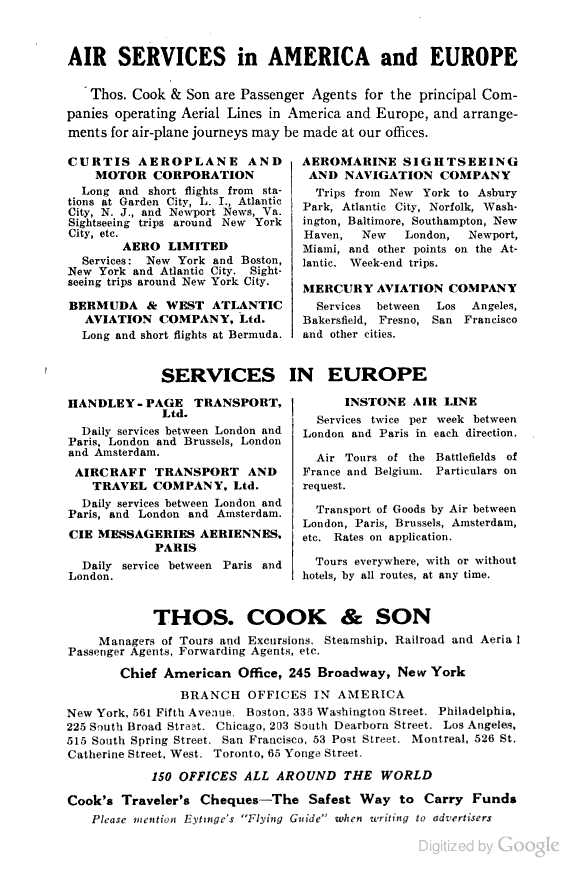 Alas, the age of airline independence ended in 1923, when a Government committee recommended all airlines merge to form one strong airline to enable expansion and greater competition with non-British airlines. In 1924, Imperial Airways was formed, and absorbed the “assets and routes of Handley Page Transport, Instone Air Line, Daimler Airway and British Marine Air Navigation Co Ltd.”

4 thoughts on “Traveling by Air in Early 1920s England”