MY WIP largely takes place in the East End, and my research has taken me into surprising directions. Before now, I filtered my view of the East End through Dickens and the Jack the Ripper murders, and perhaps a few snippets from Mayhew from time to time. Needless to say, these were myopic: yes there was squalor, poverty, murder, prostitution, and what not, but there were more vibrant working-class communities than not. And the Victorian and Edwardians were big on charitable institutions! I’ve also been tearing my hair out clump by clump (terrible imagery, isn’t it?) playing research catch-up after I discovered the London County Council and its role in governing the East End.

The most interesting discovery was that of The Alexandra Trust Dining Rooms. Built in 1898 from funds provided by tea magnate and philanthropist Sir Thomas Lipton, “this restaurant offered very cheap meals to the poor working classes. Six boilers could heat 500 gallons of hot soup and a three-course meal cost 4.5d (2p) in 1898. Some 100 waitresses could serve up to 12,000 meals a day.” Arthur H. Beavan’s Imperial London (1901) took a closer look at the charity: 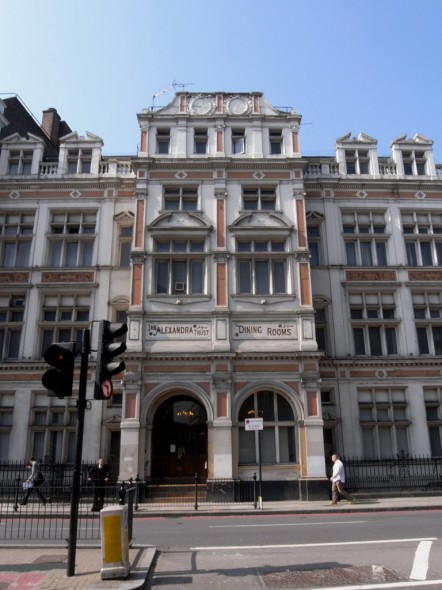 The most sensational, as well as the most practical, effort to lessen the cost of daily sustenance to our countless toilers in the East-end, is the “Alexandra Trust.”

In August 1898, the public were surprised by a Gazette announcement to the effect that a petition had been presented to “Her Majesty in Council by Her Royal Highness the Princess of Wales, the Duke of Norfolk, the Right Honourable Sir Francis Jeune, Sir Francis Knollys, James Knowles, Esq, and Sir Thomas Johnstone Lipton, praying for the grant of a Charter of Incorporation to ‘The Alexandra Incorporated Trust,’ for the purpose of providing meals at a cheap rate for poor men and women.”

Sir Thomas Lipton, on being consulted by Her Royal Highness, saw, with the keen insight of the practical man of business, that there was every reason to anticipate that restaurants for the working-classes could be maintained upon the sound lines of honest trade, as much as tenement dwellings or the Rowton Houses, and expressed himself as ready to contribute for her gracious purpose a sum that was originally fixed at £100,000, but which has since been much increased.

The great building in which well-cooked meals are served at a cost below anything previously attempted commercially in London, is close to the important tram and omnibus junction at Old Street, and is in the midst of a crowded population of workers.

The most interesting department of the great scheme is, of course, the kitchens, which, in accordance with the latest ideas, are at the top of the building, on the fourth floor.

It is, naturally, only by working with prodigious quantities that cheap rates can be maintained, but even then, it is a little startling to be told that “those steam-chests for potatoes can cook a ton and a half an hour.”

For boiling operations, there are steam jacketed tanks, deeply fluted, in which in the natural process of expansion in cooking, the contents mark themselves off into the halfpenny portions for sale.

Thirty-two hams can be dressed simultaneously, and the roasting-ovens can contain ten and seven hundredweights respectively of viands at a time.

For soup-making, six vast boilers are provided, with an aggregate capacity of 500 gallons.

In general plan, that of the famous Volkskuche, started by Dr. Kuhn in Vienna, has been followed.

The hungry customer in want of a meal finds in the bill of fare items that start from a halfpenny.

For that sum, a cup of tea, coffee, or cocoa, a bowl of soup or porridge, a slice of bread, with butter, jam, or marmalade, a piece of cake, a portion of pastry, pudding, or vegetables or pickles, may be had.

The penny alone does not seem a much-favoured coin, and a bloater, kipper, or sardines, or mineral waters are the chief items it purchases.

With, however, an additional halfpenny, it allows of a choice of a rasher of bacon, a haddock, two sausages, a buttered tea-cake, a small steak-pudding, a pork-pie, or two boiled eggs.

Cold meat, ham, or large-sized haddock are sold for twopence a plate, and a special feature daily is boiled fish and potatoes for twopence-halfpenny.

Perhaps, however, the triumph of all is the three-course dinner for fourpence-halfpenny.

This consists of soup, a choice at will of a large steak-pudding, roast pork, roast or boiled beef, roast or boiled mutton, Irish stew, boiled pickled pork, stewed steak, or liver and bacon.

It includes two vegetables and bread, and a choice between pastry, or a mug of tea, coffee, or cocoa.

There is a staff of a hundred waitresses, in a neat uniform of black dress and white cap and apron, whose duties are primarily to remove the dirty plates and cups.

Each of the three halls can accommodate 500 people, so that 1500 meals may be simultaneously consumed, and 12,000 meals can be easily provided during the day.