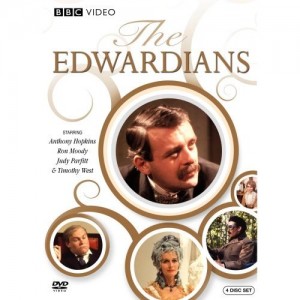 The BBC aired this mini-series in 1972, PBS’s Masterpiece Theater broadcasting it three years later, The Edwardians was a series of plays set during the reign of Edward VII, between 1901 and 1910 focusing on its most famous protagonists. According to the BFI, the episodes featured: David Lloyd George (portrayed by fellow Welshman Anthony Hopkins); Daisy, Countess of Warwick, a socialist and a mistress of Bertie’s during the 1890s; stars of the Edwardian Music Hall, such as Marie Lloyd; Robert Baden-Powell, the founder of the Boy Scouts; Sir Arthur Conan Doyle, author and creator of the ever-enduring Sherlock Holmes and Dr. Watson; E(dith) Nesbit, the author of 40 children’s books, the most popular being The Story of the Treasure Seekers (1898) and The Wouldbegoods (1899), which both recount stories about the Bastables, a middle class family that has fallen on relatively hard times; Horatio Bottomley, the notorious swindler, journalist and one-time MP; and ending with the story of Charles Rolls and Henry Royce.

The series was only shown once in the U.S., and not in 1972, but more likely 1975 or so. It was shown on “Masterpiece Theatre” but not the entire eight episodes. Only a few of the episodes were shown, such as one about a strike that threatened the British Music Halls, that involved Marie Lloyd (Georgia Brown) and Charles Coborn (Peter Pratt, singing “The Man Who Broke The Bank At Monte Carlo” – Coborn’s most famous number). The plot in that episode was how Lloyd was trying to talk an illusionist to join the budding labor walk-out. The episode regarding the founding of Rolls – Royce (with Michael Jayson as Henry Royce) was another of the episodes, as was one dealing with Sir Arthur Conan Doyle (Nigel Davenport) saving a young Parsee solicitor named George Edalji (Sam Dastor) from being accused of maiming and mutilating horses and cattle in England’s midlands (the basis, by the way, of the play EQUUS). Anthony Hopkins played David Lloyd George, rising in this period to the Chancellorship of the Exchequer, and finding that his personal life and personality threaten his ambitions to be Prime Minister one day. The connecting link of the episodes was Thorley Walters, as Prince of Wales, and later King Edward VII. His own life was illustrated in dealing with his love affair with Alice Keppel. But that episode never aired in the U.S., nor did episodes about Baden-Powell and the founding of the Boy Scouts and the oddest of “great” Edwardians, the journalist – politician – lay lawyer, and swindler – Horatio Botttomley (Timothy West). [Source]

0 replies on “Pre-Order “The Edwardians” today!”