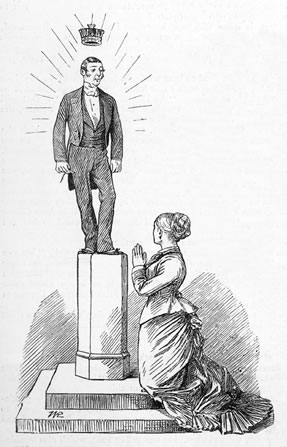 For the unmarried gentleman of high society, the world was his oyster. At no other time in history was bachelordom such a widespread, and pleasurable, pursuit. As the turn of the century dawned, the “Marriage Question” began to shift from the issue of surplus women, but on why men refused to marry! Certainly England’s system of primogeniture pushed penniless second, third, fourth, and beyond sons out into the far and wide outreaches of the British Empire, but that failed to explain why eligible men who remained at home were content to dash from cricket match to club to house party to hunting grounds with nary a thought to acquire a spouse.

In his text, The Age of the Bachelor: Creating an American Subculture, Howard P. Chudacoff argues that the bachelor subculture grew from the growing spaces created specifically for the consumption and entertainment of men–bars, taverns, barber shops, clubs, et al. I would add that men became more entrenched in their bachelordom in reaction to the increasing independence of women (the Bachelor Girls of next week’s post), which poked holes in the “normal” gender interaction of previous generations. The more women moved into traditionally masculine spheres, such as higher education, medicine, law, and other white-collar positions, which also thrust these marriageable women beneath their noses, the more men retreated behind barriers which would relieve the pressure of buckling gender barriers. Now men had to navigate social interactions with intelligent, independent and unmarried (and ostensibly unprotected females who would have formerly been 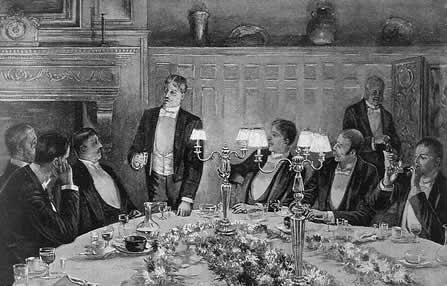 considered fair game) women, yet social norms maintained the thought that women needed the protection and security a husband would provide. With a female coworker of marriageable age and reasonable attractiveness at the next desk, males no longer had the buffer of “work” to separate them from the proscribed times for courtship.

Out of this desire for a purely masculine domain first came the bachelor apartment. Prior to the 1880s, bachelorhood was regarded as “a mere temporary condition […] a sort of interregnum between youth and sober, well-ordered manhood.” Unmarried men lived frequently in boarding houses, and not infrequently married the land lady’s daughter or the widow who sat across from him at meals. As concepts of the unmarried state changed by the end of the nineteenth century, the pressure for apartment houses built expressly for the residence of a bachelor grew, and the most luxurious apartment homes sprang up across New York practically overnight. These ran from fifteen hundred dollars per year for the most up-to-date plumbing, large rooms and meals delivered by a housemaid, to modest affairs of eight hundred to one thousand dollars (but always with plumbing!). London also joined the bachelor apartment, though on a more subtle scale, as the apartment blocks were built near or around Westminster, which was a typically masculine area of the Town. Ironically enough, the rise of the bachelor apartment ushered in a fad for dinner parties where unmarried men and women could mingle in a manner quite independent of chaperons or one’s parents. 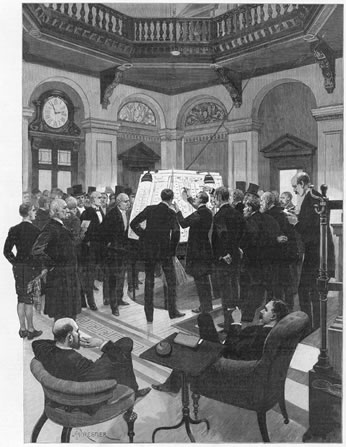 However, the bastion of bachelordom–perhaps man in general–was the club. English clubs of course dated from the 17th and 18th centuries, but the late nineteenth century saw an explosion of gentleman’s clubs on both sides of the Atlantic (and the Channel) formed by all manners of men and groups. First and foremost were the political clubs of London: Brooks (Liberal/Whig), Carlton (premier Conservative club), Junior Carlton, and the Reform. The military, which had clubs for every branch and rank (Guards’, Army and Navy, East India United Service, etc), the artistic (Athenaeum for the literati; Garrick for actors; Authors for authors, et al), the sporting (Automobile, Royal Thames, Hurlingham, etc), and social/general clubs, the most famous being White’s, Boodle’s the Junior Athenaeum, the Marlborough (formed by Edward VII when Prince of Wales), and Travellers’.

In New York, under the aegis of J.P. Morgan, the city’s most powerful and most prominent men formed the exclusive Metropolitan Club, which, along with the Knickerbocker Club and the Union Club, were the most luxurious and coveted clubs in America. Here clubs were formed along interest lines, but unlike London society, the literati and the theater world did not mingle with the wealthy society men, and bachelors were less likely to use the men’s club as an escape from women (though this attitude declined as more English traits were adopted). 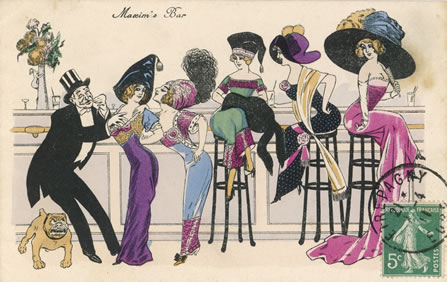 The bachelor life was most amenable to the fast-paced world centered around the theater. Gaiety girls, showgirls, chorus girls, and spectacles galore, tempted the bachelor with deep pockets and even deeper cups. In London, young bachelors–most of them military men–didn’t consider themselves men if they weren’t chucked from the Empire Theatre on Leicester Square at least once in their lifetime. Broadway was a bit more seductive, as the theater district abounded with naughty music halls and even naughtier cabarets. Here, the lobster palace society, the venue of the “butter-and-egg man” reigned supreme, and where luscious, giggling chorus girls, primadonnas, and grande dames of the stage, were wined and dined all night long. One cannot deny, however, that Paris was the destination for the bachelor who wanted to have fun with adventurous women, and among other places, such as the high-class brothels which catered to every taste, Maxim’s was the center around which Paris’s le high life formed. The food was excellent, but the service was even better, with the staff prepared for any activity in which its patrons could get into–even when Russian Grand Dukes doused the lights and began playing Russian roulette. Unlike the restaurants catering to the faster sets, Maxim’s was strictly for courtesans and gentlemen, and no respectable woman would dare enter its portals, much less recognize its existence.

The bachelor life was dangerous though, and the married men who indulged in its excesses were apt to find themselves on the receiving end of public outrage–as with the infamous Pie Girl Dinner–or, well, dead (Stanford White!). Ultimately, the life of the bachelor was so utterly sublime–girls, champagne, sports–it was a wonder why any gentleman of wealth and rank married at all! However, as worrisome as the growing numbers of bachelors were to society, the most worry was saved for that frightening, independent, “masculine” entity: the Bachelor Girl.

Further Reading:
Belle Epoque: Paris in the Nineties by Raymond Rudorff
Edward and the Edwardians by Phillip Julian
The Pursuit of Pleasure by Keith Middlemas
American Eve: Evelyn Nesbit, Stanford White The Birth of the ‘It’ Girl, and the ‘Crime of the Century’ by Paula Uruburu
Gilded City: Scandal and Sensation in Turn-of-the-Century New York by M.H. Dunlop

7 replies on “The Bachelor Life”