During the Gilded Age, American publishers met the needs of social climbers aspiring to emulate their betters by producing endless etiquette manuals, so did small presses meet the aspirations of newly wealthy blacks surging into the enclaves formerly preserved for the black elite. These etiquette books addressed the unique situation in which black Americans were placed, for while the authors stressed the importance of good manners and breeding, they also emphasized the need to repudiate the common perceptions of blacks and their “natural” behavior. 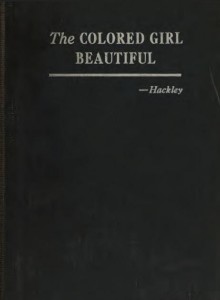 Hackley, a classical singer who studied voice in Europe, “championed the use of African-American spirituals among her own people as a tool for social change.” According to the manual, The Colored Girl Beautiful was compiled from talks given to girls in colored boarding schools across the United States.

Though Hackley addresses the spiritual side of black women and their role in the uplift of the race, it is most telling that much of her advice focuses on refuting the notion of black women as harlots and jezebels (an image forced on them to excuse the indignities they faced from white men), and how to navigate being an educated, upwardly mobile young woman in a time where her intelligence and breeding was not appreciated.

To modern eyes, the manual can seem overly conscious of presenting a positive image before whites, but otherwise, regarding gender roles, it is no different than what can be found in etiquette manuals aimed at the general populace. 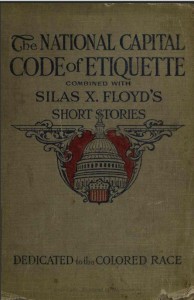 The National Capitol Code of Etiquette (1920) by Edward S. Green

Less is known of Green, but his etiquette manual includes short stories contrasting mannered and unruly behavior written by Silas X. Floyd, a graduate of Atlanta University and Baptist pastor.

Prior to the Great Migration which drew blacks from the South to northern cities like Chicago or Detroit or New York City, Washington D.C. had long been a mecca for blacks. This book was written at the height of Jim Crow, when blacks of the elite and of the lower classes, were barred from public places of amusement.