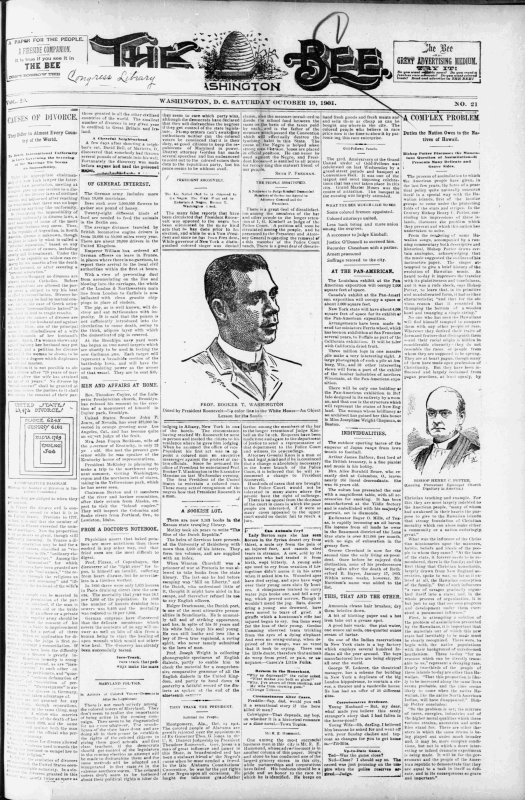 From the moment African-Americans could set pen to paper, there was the black-owned newspaper. The role of the black press reached its heights in the postbellum era, as millions of the formerly enslaved black Americans hungered for a voice amidst the clamor and fuss of Reconstruction. This voice grew increasingly important as America shifted towards the Progressive Era, where white newspapers and writers hashed out their thoughts on the “negro problem,” nearly erasing the role in which blacks played in their own lives. Not only were black-owned newspapers a source of information, but they were a sign of a thriving community–when blacks formed neighborhoods in urban areas, or even founded their own towns, the existence of at least one newspaper showed others the success and relative prosperity of the black inhabitants.

One of the most famous and influential black newspapers of the Progressive era was The Washington Bee. The Bee was published weekly from 1882 through 1922, and William Calvin Chase was its sole proprietor and editor until his death in 1921. Chase, a native Washingtonian born in 1854, was also born free, and was college educated and a lawyer, which placed him in a unique position during the highly-charged atmosphere for blacks around the time he became editor of The Bee. In his 1891 book, The Afro-American Press and Its Editors, Irvine Garland Penn described The Bee’s reputation thus: “Nothing stings Washington City, and in fact, the Bourbons of the South, as The Bee.” The paper’s own motto “Honey for Friends, Stings for Enemies” summed up Chase’s approach to journalism; he could be fulsome with praise and sincerity towards those he respected, but just as easily scorned and castigated those he didn’t. As a result, many of Chase’s friends found his blunt style indiscreet, for he “never failed to expose, in the most condemnatory manner, any fraud unjust attack or evil that caught his vigilant eye.”

However, this sort of disapproval spurred Chase on to action, and though he was a Republican and served as District of Columbia delegate to the party’s national convention in 1900 and again in 1912, he did not mince words about which policies he did not like. Chase also didn’t mince words when it came to black Americans themselves, and he considered it his mission to shine a light on the racism and exclusivity of the black upper-class Washingtonians, who frequently looked down upon the masses of Southern blacks who began to move into the city, and who were appalled by Jim Crow, as they considered themselves a buffer between “low class” blacks and whites. He also called out the black leaders of the day, finding them either too too accommodating or too theoretical to make much of a difference in the lives of ordinary black Americans.

So fearless was Chase, he did not mind losing a government post:

It is related, that on one occasion when Mr. Chase called on President Cleveland, he showed [the President] a copy of The Bee, in which [Chase] had said that in consideration of the number of outrages perpetrated in the South upon the Afro-Americans by the whites, it would cost the lives of millions to inaugurate Grover Cleveland, if elected. Mr. Chase did not deny being the author of the article. Although Cleveland was elected and inaugurated without any bloodshed, and Chase supported in a measure his administration, yet he received his discharge a few weeks afterward, at the instance of the president and Secretary of War Endicott, from the position he held in the government printing-office.

This sort of brazenness had more than once brought Chase to court, where he was five times indicted for libel, and acquitted in every case except one, in which he was fined fifty dollars. Nonetheless, Chase was known and respected by nearly every African-American newspaper editor, writer, etc, regardless of agreement with his editorials, because of the steadfastness with which he held to what he thought was right.

Read issues of The Washington Bee, courtesy of the Library of Congress.

2 thoughts on “Honey For Friends, Stings for Enemies: The Washington Bee”