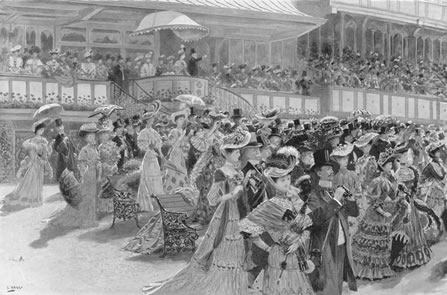 The history of the Ascot is traced back to 1711, when Queen Anne developed a taste for horse-racing and commanded that a racecourse be laid out over the Common at Ascot. Shortly thereafter, an announcement was made that the Queen would present a challenge plate worth 100 guineas. The London Gazette printed an official statement:

“Her Majesty’s Plate of 100 guineas will be run for round the new heath on Ascot Common, near Windsor, on Tuesday, the 7th August next, by any horse, mare, or gelding, being no more than six years old the grass before, as just be certified under the hand of the breeder, carrying 12 stone, three heats, to be entered the last day of July, at Mr. Hancock’s, at Fern Hill, hear the Starting Post.”

The races were actually postponed until the 11th of August, when Queen Anne inaugurated the Ascot with a drive in state from Windsor Castle. Ever since then, the royal influence on the Royal Ascot has been quite marked, and has made the races one of the highlights of the London season.

Beverley Glick recounts the rise of Ascot into what we see today:

The first four-day Royal Meeting took place in 1768 but Royal Ascot week as we now know it started to take shape with the introduction of the Gold Cup in 1807, when the roots of today’s Royal Enclosure dress code first emerged.

Regency dandy Beau Brummell, a close friend of the Prince Regent, decreed that men of elegance should wear waisted black coats and white cravats with pantaloons. Over the years, this evolved into the wearing of morning suits for men and equally formal clothes for ladies, who must still wear hats in the Royal Enclosure.

It was racing fan George IV who commissioned a two-storey stand with surrounding lawn to be built in 1822; access was by royal invitation only.

Three years later, the King introduced the Royal Procession, and the sight of the Royal party driving up the centre of the racecourse continues to be one of the defining images of Royal Ascot and the summer season.

The Gold Cup remains the feature race of the third day of Royal Ascot and is traditionally the busiest day of the week. It has been known as Ladies’ Day ever since 1823, when an anonymous poet described the Thursday of the Royal Meeting as: “Ladies’ Day, when the women, like angels, look sweetly divine”.

In the 19th century it was common for a small fortune to be spent by the most fashionable society ladies on dresses commissioned solely for Royal Ascot, with their most extravagant outfits saved for parading on the day of the Gold Cup.

In the 1860s, the Duchess of Marlborough found Ascot week “very tiring… fortunes were yearly spent on dresses selected as appropriate to a graduated scale of elegance which reached its climax on Thursday; for fashion decreed that saved one’s most sumptuous toilette for the Gold Cup day”.

Another Royal Ascot tradition can be traced back to the very earliest meetings. In the 18th and early 19th centuries there are accounts of wealthy race-goers turning up with entire carriages devoted to champagne, wine and cigars and even portable ice-houses to transport them in.

The more modern tradition of the picnic in the car park came with the arrival of the motor car at Ascot in 1912. Even today you can catch sight of butlers, candelabra and silver service at some of the more lavish picnics in number 1 and 2 car parks.

The tradition of extravagant parties during Royal Ascot week continued until the First World War but the relative austerity of subsequent decades saw such lavish excess come to an end.

Sources:
The London Season by Louis T. Stanley
Homepage of the Royal Ascot