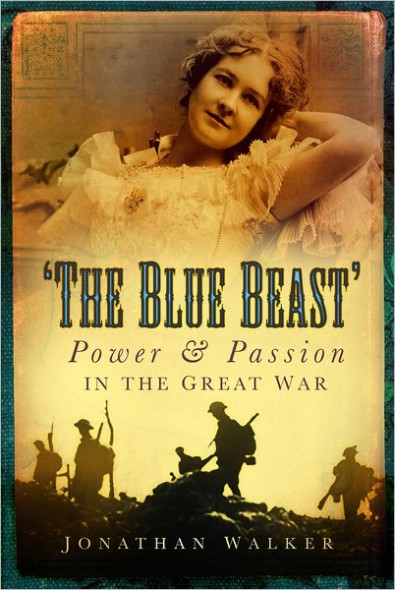 This is the epic true story of three beautiful Edwardian mistresses and confidantes. Using extensive new research, “The Blue Beast” exposes the scandalous private lives of those at the pinnacle of power during the First World War.

After The Battle of the Somme – the bloodiest day in British Military history – Prime Minister Asquith sought consolation, not from his wife or lover, but from Sylvia Henley, the aristocrat with whom he had become obsessed. Theirs was an extraordinary tale of love and betrayal.

Meanwhile, the wealthy American adventuress, Emilie Grigsby set out to seduce the military men and numbered General Sir John Cowans, the powerful Quartermaster-General, The Times military correspondent, and Rupert Brooke among her conquests.

Winifred Bennett entranced the Commander-in-Chief, FM Sir John French and carried him through the tumultuous early days of the War.

In “The Blue Beast”, Jonathan Walker provides us with an entirely new and astonishing perspective on British leaders in the Great War, exposing the realities of Edwardian London in which women of society, through their lovers, affected the course of the conflict.

When Jonathan Walker emailed me to ask if I were interested in reading his latest release, The Blue Beast, it was right around the time the Petraeus Affair dominated the news, and I found the topic of the book rather timely. Shockingly, I was virtually ignorant of the secret love affairs of the three women in this book, and when it arrived in the mail I was absolutely engrossed in the story. Walker takes us through the upbringing and background of these three quite disparate women–Winifred, an upper class Englishwoman with an exotic background; Emilie, an American courtesan; and Sylvia Henley, a typical English lady–and how they managed to beguile the many of Edwardian Britain’s most powerful men.

The book is frank on sexual matters, which completely upends any of those lingering myths over “lie back and think of England”, and is also an equally frank look at how the social elite operated both before and during the Great War. In fact, I found this to be the most fascinating part of the book: the popular image of WWI is of mud and devastation, but in the top circles, love affairs, personal vendettas, lavish parties, string-pulling, and luxurious surroundings carried on as though millions of men and women weren’t dying on battlefields across the globe. It was all pretty eye-opening and gives an even greater, more nuanced look at the world we see in Downton Abbey.

As a result, The Blue Beast is enjoyable as a biography, a book on WWI, and as a work of social history all in one!

4 replies on “Review: The Blue Beast: Power and Passion in the Great War”