The egg is one of the enduring symbols of Easter, and unsurprisingly, we find it present far, far before the modern era.

Easter and Easter eggs have their roots in pagan Europe, where eggs symbolized the rebirth of the Earth in celebrations of spring. When the pagans converted to Christianity, they kept many of their symbols and holidays and gave them meaning within their new religion.

The meaning of the Easter egg can also be found in other mythologies and religions: “[e]ggs were held by the Egyptians as a sacred emblem of the renovation of mankind after the Deluge. Jews [of the Ancient Era] adopted this mythos to suit the circumstances of their history, as a type of their departure from the land of Egypt, and it was used in the Feast of the Passover, as part of the furniture of the table, with the Paschal lamb. The Christians have […] used it on this day, as retaining the elements of future life, for an emblem of the Resurrection.” 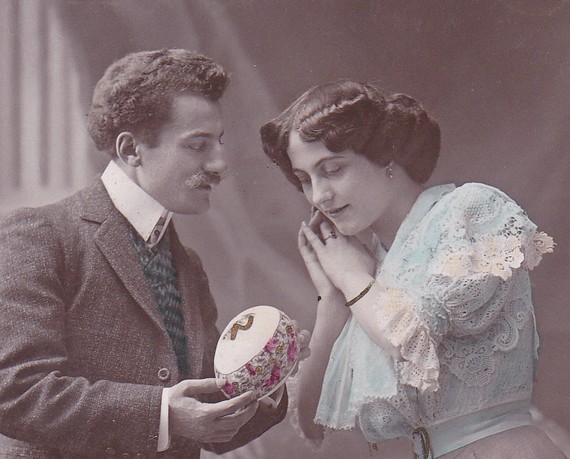 Interestingly enough, the English word for “Easter” is Saxon, although the Spanish, French, and Scandinavians cling to the Semitic word, derived from the Aramaic pesach, which means “to pass by,” and has been translated into passover. From this, Easter eggs are also called also Pasche, Pash, Pace, or Paste eggs.

The earliest known practice of painting and decorating eggs comes from 2,500 years ago, when the ancient Zoroastrians painted eggs for Nowrooz, their New Year celebration, which fell on the Spring equinox. The painting of eggs also derived from the folk traditions of Bulgaria, Russia, Romania, Ukraine, and Poland. In the 18th century, Italy produced beautifully designed and elaborately painted Easter eggs, which were frequently presented as gifts to ladies of quality.

By the Edwardian era, decorating Easter eggs had become a very fine art–eggs were painted, dyed, enameled, bejeweled, and beribboned. Some books of children’s amusements even featured instructions for turning eggs shells into a variety of shapes, such as frogs, or gluing delicate appendages on them to turn them into rabbits or cranes. In Switzerland, craftsmen carved delicate wooden eggs, which were painted and highly polished, and held little gifts (a bottle of scent, a tiny vanity bag, or some of the miniature bronze or china animals and birds).

French eggs were incredible chic, “covered with every conceivable material, stylishly trimmed with ribbons, artificial flowers, birds, and butterflies.” They usually contained chocolates or bon-bons, and the more sophisticated eggs were used as table decorations. And let us not forget the absolutely amazing and breathtaking eggs created by Carl Fabergé for Russia’s Imperial family and for the wealthy.

Place in a copper kettle and melt down on the fire 50 lbs. of No. 1 fondant cream and heat the cream thin enough to cast, then add 15 lbs. of special nougat fondant and heat the cream thin enough so that it can be casted by runner or funnel dropper. Then add 4 ounces of vanilla flavor, then cast in starch, using the different sizes of egg shape molds, from the 5 cent egg to the $1 size chocolate dipped egg.

Make the eggs with fruit, nuts and cocoanut in the cream, or drop the glazed pineapple or glazed cherries or nuts in the cream. Then leave in starch over night, then dip each half in the 25c and 50c and the $1 size in chocolate. Then, after they are dipped in chocolate, stick the two halves together with chocolate. Then decorate by placing a border around the egg where the two halves are stuck together. In making the large size eggs the cream must be heated good and hot before being casted in starch, or otherwise the cream will not hold its shape when dipped in chocolate.

For the traditional Easter egg, the coloring was obtained from inexpensive dyes, or cheap ribbon, which was boiled in a little water and the egg submerged into the bowl until the desired color was obtained. Calico eggs were very popular, and to make them, you would wrap each egg in a piece of chintz, and the pattern would adhere to the egg shell while boiling. Other sources for color included the red skins of onions for rose, logwood dye for blue, Spinach water for green, and onion juice water for a golden yellow.

For painted eggs for place cards or caricatures, the boiled egg was washed in powdered pumice to remove the gloss of the shell, then the egg yolk was blown out of the shell through small holes pricked at both ends. After the yolk was gently blown out of the egg, it was rinsed with warm water and dried carefully. The decoration was drawn with a hard pencil and then quickly painted over with watercolors. If the egg was intended to hold a dainty treat, a hole was made on one end, the treat dropped in, and the shell pasted with thin paper.

The most enduring Easter egg event in American history is the annual egg rolling across the White House lawn. Some point to Dolly Madison as the arbiter of this tradition, but it kicked into full swing under the administration of Rutherford B. Hayes (1877-1881). Children of every ethnicity arrived from just about every corner of Washington D.C. to roll their eggs on the White Lot (an area located between the South Lawn of the White House and the Washington Monument). By the 1900s, it had become the social event of fashionable Washington, and a Marine Band was added for sprightly music!

Every-day life in Washington by Charles Melville Pepper
“Easter Eggs And What To Do With Them” (Every Woman’s Encyclopedia v4)
“Easter Eggs”, The Living Age, Volume 113 (1872)
“Customs and Traditions of Easter”, Lippincott’s Magazine, Volume 33 (1884)
“Rolling the Easter Egg” by John Nixon, The Strand Magazine, Volume 21 (1901)
“Preparing Easter Eggs,” The New York Times, April 2, 1911

2 replies on “The Tradition and History of Easter Eggs”