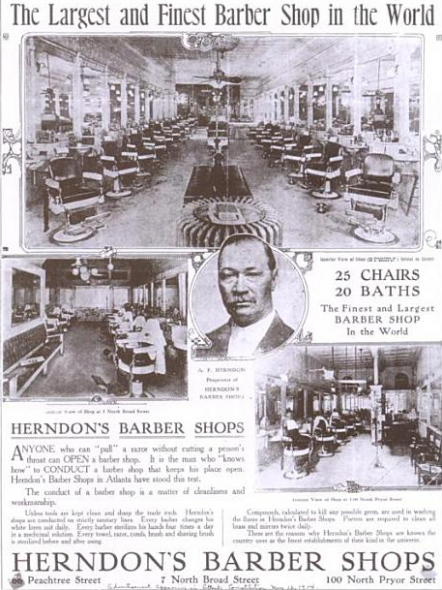 The amazing and outrageous dichotomies of life under Jim Crow were embodied in Alonzo Herndon. Each day, he traveled from his home to ride at the back of a street car to his barber shop in Atlanta, where he then entered the building from the rear entrance. When Herndon’s barber shop opened for the day, he shaved, clipped, trimmed, and otherwise pampered many of Atlanta’s most prominent white men in his flagship barbershop on 66 Peachtree Street. It may have shocked his customers to their toes to learn that their elegant and efficient barber had been born into slavery in 1858 and rose to become Atlanta’s first black millionaire and president and founder of the Atlanta Life Financial Group (then known as The Atlanta Benevolent and Protective Association). It would have also shocked white Atlanta even more to visit Herndon’s home, a Beaux-Arts classical mansion designed by his first wife, Adrienne McNeil Herndon, an actress and elocution teacher at Atlanta University.

However, Alonzo Herndon’s most indelible mark was the opulent barbership located, as mentioned above, on 66 Peachtree Street. After the death of his first wife, Herndon soon remarried again (Jessie Gillespie), and they honeymooned in Europe. Herndon was inspired by the sights and elegance of the “Old World,” and returned to Atlanta full of plans to transform the three-story building, which spread an entire block from Peachtree to Broad, into a palace. By the spring of 1913, Herndon Barbershop had become the Crystal Palace.

“One entered through mahogany and plate-glass doors to a long, elegant parlor lined with French beveled mirrors and lit by crystal chandeliers and wall lamps. Ceiled in white pressed-tin and floored in white ceramic tile, the room accommodated twenty-five custom barber chairs that were outfitted with porcelain, brass, and nickel, and upholstered in dark green Spanish leather. ‘Everything in my shop is the best procurable,’ Herndon boasted. It was a brilliant display. Even the boot-black stands were of nickel and marble.”

The Crystal Palace became known from Richmond, Virginia to Mobile, Alabama as the best barbershop in the South, and became an unofficial city attraction visited by local Atlantans as well as tourists who reveled in its opulence. Herndon also counteracted Jim Crow laws by designing his back entrance that looked the same as the front! By the time of Herndon’s death in 1927, Atlanta Life, which he funded with the profits of his barbershops, expanded into one of black Atlanta’s premiere institutions with assets totaling over one million dollars. His son Norris further expanded the insurance business into a multi-million dollar company, which–along with the Herndon mansion–still exists to this day.

Herndon Home
History of the Herndon Home
The Crystal Palace in Atlanta Magazine
The Alonzo Herndon Family
The Herndons: an Atlanta Family by Carole Merritt

1 thought on “Alonzo Herndon and his Crystal Palace”