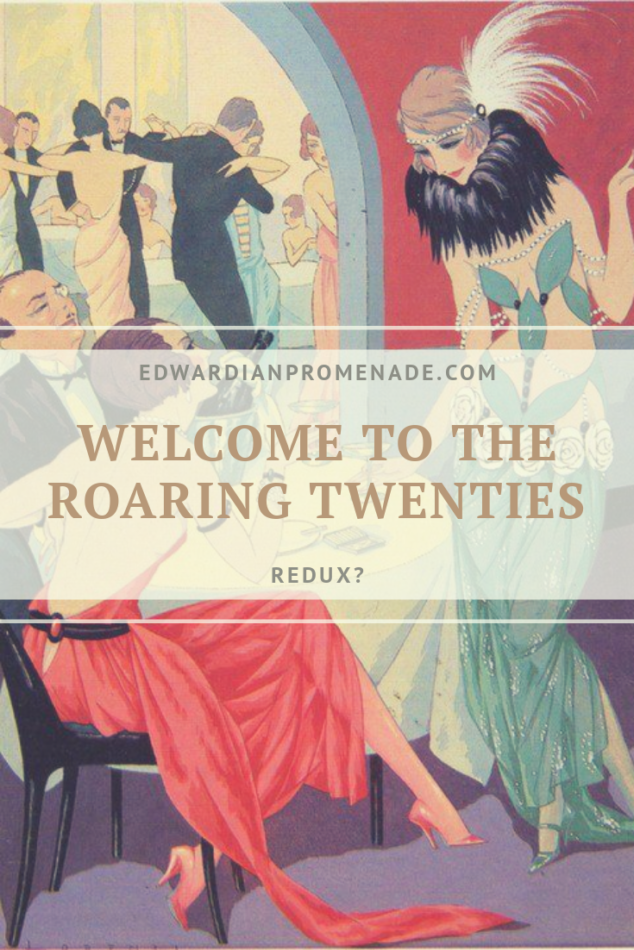 When the clock struck midnight on January 1, 1920 everyone awoke from the spell cast by the Great War and the Spanish Flu to a world changed–and yet not. Common perceptions peg the 1920s as one long party, where things considered “modern” emerged. If you comb through Edwardian Promenade’s archives you’ll see the presence of modernism in the pre-war period; furthermore, great anxieties lingered behind the popular images of flappers, gangsters, champagne, and raccoon coats.

We are short of many things— coal, petrol, milk, sugar, salt, tobacco—but nothing is rationed, and if you have money and are prepared to pay the price there is nothing that cannot be bought. Butter varies from 6s. to 7s.6d. an English pound (compared at the old rate of exchange), but we know nothing of the British restrictive legislation limiting one to 13 ounces per head per week. France jumped at the offer of the Dutch butter which England (perhaps wisely, in view of the existing rate of exchange) a few weeks ago refused. From the point of view of the comparative political economist, the fact is significant of much, as Carlyle would have said. It measures, perhaps, much of the best and the worst that is comprised in the essential differences between the France and the England of to-day. “One of the worst difficulties Paris has to face at present is the housing problem. What this means may be expressed in the single fact that there are something like 150 newly-elected members of the Chamber who are absolutely unable to find flats or houses in the city, or within easy reach of it. The shortage, which is by no means confined to Paris, is easily explained. Owing to the destruction by the Germans of scores of thousands of houses in the invaded districts, some millions of people were driven to find shelter during the war in Paris and other large cities of the North, which will be a matter of many months at least, housing accommodation throughout the rest of France will continue to be very difficult to obtain. Paris has had her share of strikes, too: first the strike of the underground railways—which, as in the case of the similar strike in England, caused most discomfort among the working population—and then the strike of the shop assistants and printers, both of which ended in the submission of the strikers. The question was handled with admirable firmness; a daily newspaper was published in two editions, morning and evening, and the proprietors of the big shops made shift to keep their establishments open and to attend to the wants of customers. But the chief trial of Paris this winter has undoubtedly been the lack of coal, which at one time menaced the supply of electric light and threatened the industrial life of the city and entailed a considerable amount of suffering on the part of the inhabitants.

Russia remained locked in a bitter, bloody civil war between the Red and White armies that would last until 1922, when the Red Army emerged victorious and Russia became the USSR. Until then, the world watched the fighting from afar, wondering how Russia would fit into the new world of the Post-war era. The rest of continental Europe remained equally unstable, with the end of the German Empire and the Hohenzollern Dynasty–whose ruler, Wilhelm II (Queen Victoria’s grandson) had abdicated shortly before Germany’s defeat–and the establishment of a republic. The breakup of Austria-Hungary and the end of the thousand year Hapsburg rule created many independent countries eager to determine their own fate.

That grave distress exists to-day throughout Europe is generally known, and we have been warned that our own economic troubles are by no means at an end. In Germany our troops in occupation have failed to notice any special signs of hardship or destitution; but there can be no doubt of the distressing conditions in the provinces of the former Austrian Empire, and above all at Vienna. Twenty thousand ragged and starving children swell the horde of mendicants who throng the streets. All the schools are closed. As to general conditions, there have been recently 100,000 deaths…The daily ration for the population of the once-brilliant capital of the Hapsburg Empire is 100 grammes of bad bread–a little over three ounces-per head. The American Relief Commission still provides one meal a day to 100,000 children, but the British Food Mission is about to close down owing to lack of funds.

Furthermore, on January 10, 1920, the Treaty of Versailles finally went into effect, demanding that Germany pay reparations, return Alsace-Lorraine to France, and a number of other conditions that created a culture of resentment and persecution well into the new decade.

Definitely not things we associate with the 1920s!