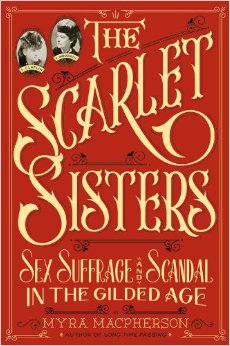 The Scarlet Sisters: Sex, Suffrage and Scandal In the Gilded Age is a very approachable book about the lives of Victoria and Tennessee Claflin, two sisters who shocked and scandalized 19th century American society, and how they took the world by storm.

The exploits of the Claflin sisters would not be out of place in a modern day tabloid. They courted the press and then fought them off when they wanted to leave their exploits behind. They disobeyed society’s edicts and then reversed this when they moved to England to build a respectable new life for themselves. In a way, I can understand why they wanted to retreat; it couldn’t have been fun to be in the limelight all the time and seen as unnatural. However, I found myself disappointed that Victoria and Tennessee couldn’t be openly proud of their achievements and not swept it all under the rug. After all, their childhood had been so terrible  and chaotic, yet they managed to rise above it all to become powerful, unconventional women who were never victims again.

The skills the sisters learned as mediums and as quack doctors, selling medical potions with their father, gave them the ability to be convincing and to talk to large crowds. They used this to run their own financial business, to lecture to large crowds about the women’s suffrage movement, and in Victoria’s case, to run for President of the United States. I loved the style of this book and how the author used primary sources so it was if you were really having a conversation with those involved and those who knew the sisters.

There is also a lot of information about women’s concerns at the time within the book, such as prostitution, marriages of convenience, the vote, and contraceptives. I’d always pictured the free love movement to be something from the 1960s, but reading this book made me realize it had been around a lot longer. The Claflin sisters were ahead of their time when they preached against the double standard of men being able to take lovers before and after marriage, whilst women were expected to settle down with one man in marriage and often with little love shared between them.

I really enjoyed this book, and if you love reading true stories about strong heroines then you will as well.

What made you want to write about the Scarlet Sisters?
In 2008 America was all agog at the historic possibility of a woman, Hillary Clinton, being on a ticket as president with an African American male, Barack Obama, as vice-president. I happened to read a tiny squib that said it had been done before, in 1872 when Victoria Woodhull ran with former slave and great orator, Frederick Douglass, on an obscure third party ticket. I began to explore this and discovered Victoria’s sassy younger sister, Tennessee Claflin, and I was hooked. Here were the two most symbiotic  and sensational sisters in American history, amazingly avant garde.

They took on the white male power structure, from the hypocritical famous reverend Henry Ward Beecher, to corrupt financiers and politicians. In a time when women had no power they carved out major firsts: the first women stockbrokers in America with 2,000 or more brokers and assistants rushing out into the street to see them open their firm; the only two sisters to publish a radical Weekly; Woodhull was the first woman to address congress; Tennie ran for congress the same year her sister ran for president and shocked the world by becoming an honorary colonel of New York’s only black regiment.

Then they outed Beecher for adultery, were clapped in prison on a trumped up charge of sending obscene material through the mail, and put in motion the Beecher Trial of the Century (which ended in a hung jury). By then destitute, abandoned by friends and the suffragist movement, they sashayed to London and married two of the richest men in England. Famed beauties, they lived by their wits and street smarts and when the truth didn’t suit them, they recreated themselves. Yet through it all they remained true to their crusade for women’s freedom.

Is there anything about the Scarlet Sisters background that you can relate to your own?
Their childhood, forced into scam fortune telling by their one-eyed snake oil salesman father ,was far afield from anything I knew but when I started as a journalist during the Mad Men era, I faced rank discrimination. I covered national sports and could not get into the press box  to file my stories because I was a woman. The National Press Club and many clubs banned women until the early eighties. I wrote about abortion before it was legal, and women’s rights issues as well as covering presidential politics for the Washington Post and witnessed discrimination of women in many careers. It is amazing how many of the sisters’ battles remain a problem today; they fought for equal pay for equal work, still not achieved in the United States. They were assailed by the same sort of right wing hard liners on issues like contraception that feminists are today.

Do you have a sister?
Sorry but I had no sisters. However, I do think the only way they managed to be so outspoken and active was because they had each other. Tennie spoke at one point of how despairing and difficult it had been to go against social norms in their arguments for Free Love, which could mean anything from trying to change draconian divorce laws that penalized women to deciding when and if to marry or when and if to have children–all outrageous ideas during the Victorian era. Although Victoria could lash out on stage and in print against detractors, she was often a nervous person who needed the support Tennie gave her. Although seven years younger, Tennie was the sturdier one of the two and looked after Victoria.

Which sister would I want to be?
I am going to cop out and say I would like to be a combination of the two. I like Tennie’s vivacious spirit, generosity and sense of humor. I admire Victoria’s unswerving sense of devotion to her causes–until it suited her purpose to disavow free love. Both were not perfect and when their backs were to the wall they could be tough in defending themselves and, as I have said in the book, had few scruples about lying when it suited them. But this was not new in an era where get-rich-quick robber barons and even the older rich crowd, like Caroline Astor, made up worthy antecedents. The very idea that they could be so far ahead of their time remains intriguing.

If you were a woman in the Victorian era would you stay at home or be blazing your own trail? What would you be doing do you think?
I would definitely like to think I would have been out blazing a trail in Victorian times, probably in the liberal wing of the suffragist movement and also in journalism. When I started my journalism career, most women my age were getting married and having babies. (I did that later). I have always been against the grain. when I sought my first newspaper job there were no women covering anything but society news, fashion etc. I fought my way out of that niche and was one of the few women covering regular news. I don’t know if I could take the pummeling the sisters did, but in a much lesser way, women in the sixties and seventies were breaking new ground and I was among them.

I have written books that are certainly masculine in subject matter–Long Time Passing: Vietnam and the Haunted Generation, which was the first trade book to mention PTSD and is now considered a classic in describing how the war affected the generation that either fought in the war or escaped it. All Governments Lie: the life and times of Rebel Journalist I.F. Stoneis a history not only of one man but an examination of the media coziness with government throughout the 20th century.

My daughter became a three time Emmy Award winning producer for ESPN, the major sports network, so you can see how much times changed for women although she too was a rarity when first hired as a field producer by ESPN.

3 thoughts on “Interview with Myra MacPherson, author of The Scarlet Sisters: Sex, Suffrage and Scandal In the Gilded Age”