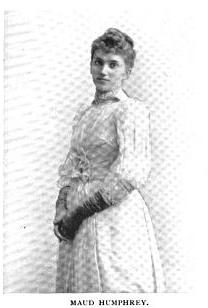 Maud Humphrey was yet another who took full advantage of the widening opportunities for educated young women at the turn-of-the-century. Though she is now known for being the mother of Academy Award winner Humphrey Bogart, I think it quite fair for her equally compelling life to be pulled out of the footnotes of history. Maud was born in 1868 to a prominent family in Rochester, New York. She displayed an early talent for art, which was fostered by evening art classes from the age of 12. By her late teens, the skilled artist landed her first commissions for black-and-white illustrations in children’s magazines, and at eighteen, she moved to New York, where she enrolled at the recently founded Art Students League. From there she journeyed to Paris for further study at the Julian Academy, and managed to train under James McNeill Whistler.

Maud’s chosen medium was watercolor, and her distinctive dry watercolor technique lent well to her sketches of babies and children. Unlike most drawings of the day, her toddlers and tots appeared active and alert, and they garnered great demand by advertisers of such products as baby food and Ivory soap, and were also seen frequently on greeting cards and calendars, and sold as prints. Her marriage to Dr. Belmont De Forest Bogart, a fashionable surgeon, in 1898 pushed them into the Social Register, and Maud’s talents–which included exceptionally popular books of her illustrations, and the ad campaign for Mellins Baby Food (for which baby Humphrey was used as model)–pushed her income to over $50,000 a year, far more than her husband’s salary. At the peak of her career, Maud Humphrey was a household name, and she soon turned to a more sophisticated field–fashion illustration–in the late 1900s as art director of The Delineator magazine, and did more fashion illustration, both for magazines and for pattern companies. Maud was most proud of this position because The Delineator published articles about her favorite cause, women’s suffrage.

A treasury of stories, jingles and rhymes. With one hundred and forty vignette illustrations in half-tone (1894)