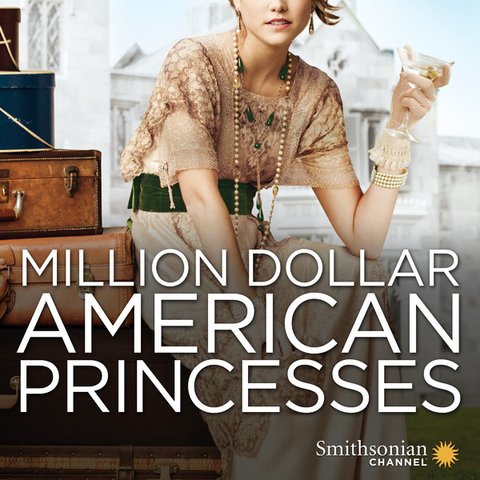 My Twitter feed was filled to the brim with ads for the Smithsonian Channel’s Million Dollar American Princesses in the weeks leading up to the premiere of Downton Abbey‘s fifth season. The American heiress in 19th and 20th century Europe is a topic that never grows old for me, and I was aggravated that I did not have access to the channel. Luckily, the episodes were made available for purchase, and I settled in for a few evenings over the past week to watch and enjoy this three-part documentary series hosted by Elizabeth McGovern (“Cora” on Downton Abbey).

Drawing from the expertise of such historians, writers, and important personages as Dr. Elizabeth Kehoe, Anne Sebba, Jessica Fellowes, and John Julius Norwich, and using live-action against the lavish backdrop of England’s great countries houses, Million Dollar American Princesses is a treat. There is also a heavy Downton Abbey tie, with each episode drawing connections between the inhabitants of the show and of Highclere Castle. As much as I know about the period, I was still bemused and intrigued by the stories presented in the three episodes. Spanning a time period from the 1870s to the 1930s, this is the story of the American women who conquered high society and whose blood runs in some of the greatest houses in England–including the British Royal Family!

The story begins in 1873, when Jennie Jerome meets and falls in love with Lord Randolph Churchill. Their whirlwind courtship and love match sets the stage for the entry of American girls into British high society. Though most found themselves trapped in loveless, passionless marriages. This was the case for Jennie’s close friend, Consuelo Yzanga, a Cuban-American heiress who wed the dissipated Viscount Mandeville (later 8th Duke of Manchester). It was love on her side, but love of money on his side, and his abandonment of her and the subsequent tragedies of her children, are a cautionary tale. The most amusing part of this episode was the segment focusing on Frances Work. She married James Burke Roche, later 3rd Baron Fermoy, and became–through her son, the 4th baron–the great-grandmother of Diana, Princess of Wales. Frances’s father despised the British aristocracy and wrote codicils in his will to break the ties his daughter and grandsons had to England. The producers of this documentary series cleverly interviewed Frances’s American and English descendants, of which Diana’s brother, the current Earl Spencer is one!

Episode 2: Wedding of the Century

Now in the 1890s, the high point of the American heiress in high society, this episode focuses on the most famous American heiress, Consuelo Vanderbilt. Her story is very well known, but the interviews on site at Marble Palace, in the very rooms in which Consuelo walked (and suffered), makes her tale real. There are also plenty of gorgeous shots of Blenheim Palace and the equally gorgeous paintings of Consuelo that hang on its walls. The other subjects of this episode are May Goelet and Mary Leiter, both of whom found mutual love with their British spouses on their own terms. May was actually from an established “Four Hundred” family, which may account for her experience as an American heiress. Since she wss free of needing to marry up to enter society, she wouldn’t be taken in by fortune hunters. Mary Leiter was nouveau riche, but she fell in love with a rising politician, George Nathaniel Curzon, who eventually fell in love with her soon after marrying her for her money. As Vicereine of India, she became the highest ranking woman in Britain after the royal family.

This episode was my favorite because, admittedly, I know all about Jennie, both Consuelos, and the other ladies featured in the prior episodes; the focus on American heiresses of the 1920s and 1930s was brand new territory. We begin with the brilliant, sharp-tongued Nancy Astor, who was the first woman to take her seat in Parliament (Constance Markievicz was the first woman elected, but as an Irish republican, she refused to take her seat). Her long-running feud with Winston Churchill sparked some of their best bon mots. Next we have the plucky, hard-as-nails Maud “Emerald” Cunard, whose San Francisco antecedents are little scandalous. But what can’t money do for a person? She marries an older Englishman, abandons him, and sets up a sophisticated, cosmopolitan salon of movers and shakers. She also gives birth to one daughter, Nancy, who is just as tough and independent, but rebels in a completely different direction. Along the way, we learn the story of Catherine Wendell, the topic of the current Countess of Carnarvon’s Lady Catherine, the Earl, and the Real Downton Abbey. She marries the 6th Earl of Carnarvon in a love match, but brings no money at all.

The final chapter in this American heiress saga closes with the scandal that still reverberates to this day: Wallis and the King. Wallis actually got her hands on the Prince of Wales (later Edward VIII and Duke of Windsor) through another American heiress, Thelma, Viscountess Furness. And Maud–now Emerald, after her favorite precious stone–is in the thick of the plotting to keep Wallis and Edward VIII together. The scheming Emerald fully expects to be Lady of the Bedchamber when Wallis becomes queen. Unfortunately, the Abdication Crisis spells the end of the nearly sixty year assault of the American woman on British high society!

Yet, as Elizabeth McGovern cheekily says, American blood runs through the veins of the highest houses in the United Kingdom–a truly guilty secret.

For more information, including biographies of the American heiresses, visit the Smithsonian Channel website.

The documentary featured insights from Dr. Dana Cooper, professor at Stephen F. Austin State University College and author of Informal Ambassadors: American Women, Transatlantic Marriages, and Anglo-American Relations, 1865-1945, and I was fortunate enough to catch up with her to discuss her experience with contributing to Million Dollar American Princesses:

In the spring of 2014, I was contacted by Finestripe Productions (a production company based in Glasgow, Scotland) about my book, Informal Ambassadors, which was scheduled to be published that fall. Based on the global phenomenon of Downton Abbey, the Smithsonian decided to commission a documentary on the historical basis of the character Cora Crawley, or Lady Grantham, as she is known in the show. As the American-born, British-wed woman whose family fortune has maintained Downton for decades, Cora functions as the historic consolidation of the hundreds of American heiresses who married into the British aristocracy between the late nineteenth and early twentieth centuries. Informal Ambassadors examines the experiences of five such women and their individual and collective transatlantic experiences.

Through a series of emails and phone calls through the spring, I communicated frequently with Michael Burke, the producer of the series, and Robert Neill, assistant producer. They were both tremendously kind throughout the process, and I enjoyed getting to know them during this time. We made arrangements for me to fly to New York in June, and I was interviewed for the documentary at the House of the Redeemer, in upper Manhattan, which provided a beautiful setting for filming.

The transatlantic crew—some from Britain, some from the United States—reflected the nature of the documentary. Everyone was very nice and helpful and more than willing to guide me through the process as I had not been interviewed for a documentary before. Michael guided me through the question and answer process and reminded me to repeat a bit of the question posed so that the answer would make sense in an editing room. The room was quite dark and the lighting was so hot and bright and near my face, I’m still surprised that it wasn’t in the actual picture! In all, I was interviewed for just under three hours. It still intrigues me that after all of that, the five seconds or seven seconds of commentary in the documentary is what people see!

It was very odd to not see the documentary before it aired on the Smithsonian Channel in January. I no idea what had made the cut and what had not. I watched it with my family, and my six-year-old daughter was just amazed that “Mommy was on TV!” My three-year-old son fell asleep every time as the documentary was beyond his normal bedtime!

I must say that it was quite an honor to be included in the documentary. I was thrilled to be contacted and to participate in something along these lines at this level. It was a terrific experience and one that I will never forget.