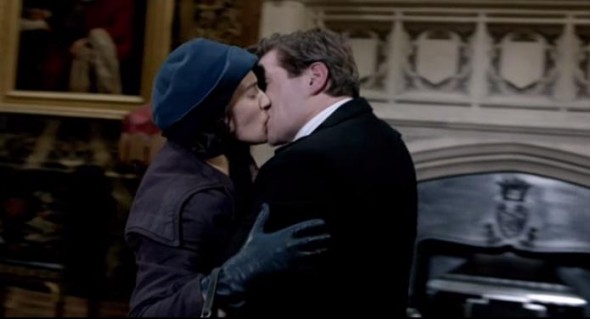 I found this episode to be a “bridge” episode–that is, it exists to tie up old plot threads and introduce new ones for the coming episodes. So last night we saw Tom and Sybil permanently settled at Downton, the introduction of two new downstairs characters–Jimmy the footman and Ivy the kitchen maid–the wrap-up of Ethel’s will-she-won’t-she give up Charlie, and Matthew taking over the reins on the estate and realizing what a mess Robert and his estate agent have made of its running. Unfortunately, we didn’t see the end of the increasingly tedious saga of Prison Bates and the prison mate and guard who inexplicably hated him on sight, but at least the tiredness was mitigated by a sweet scene of Anna and Bates hugging their respective piles of hoarded letters.

This isn’t to say there were no great moments, those special “Downton” touches that remain indelibly imprinted in pop culture:

On to the more important storylines of the episode:

Tom and Sybil and the Irish War for Independence The fight for Home Rule was bloody and bitter. I definitely understand that the family’s sympathy would lie with the Anglo-Irish aristocrats rather than the regular Irish and Ulstermen battling one another and the English, but the slipshod method of introducing this topic into Downton makes them seem callous, arrogant, and unlikable. Granted, much of the reaction is at first driven by fear and anger over Sybil’s safety, but once she arrives at Downton there is no recognition of the reality of the situation. I’m also disappointed by how Sybil has lost her voice! We neither see nor hear her perspective on life as Tom’s wife, life in a troubled Ireland, or how her life has changed by not marrying back into the insular aristocratic world of her birth. Now we only see Sybil acting as mediator between her family and Tom instead of having her own opinions and values, which is definitely not the Sybil we saw in S1!

Thomas, Jimmy, and O’Brien We’ve been promised a more sympathetic Thomas this season, and it appears we’re being set up to see a romance of some type. However, Thomas’ leering at Jimmy is incredibly creepy when Jimmy has given no sign of mutual attraction or recognition. I loathe to see what O’Brien will cook up from this since she knows Thomas is gay.

Ethel and the Bryants As I said on Twitter, Ethel’s story is a lesson against aspiring above one’s station and it’s painful to watch her descent. Yes it was a harsh and unforgiving world for a woman who lost her good name, but it sometimes feels like Ethel is being punished on a meta level for being discontented with her place. Gwen in S1 wanted to be a typist, but she was not personally contemptuous of being a servant, nor did her quest to leap out of domestic work influence her romantic/sexual desires. The cold irony is that the very act that got Ethel into trouble is the only work she can get, furthering her exploitation in body and in reputation. I found it interesting that Isobel was not supportive of giving Charlie to his grandparents, but Mrs. Hughes was: Isobel’s optimistic pragmatism that she could still help Ethel with Charlie or the empathy of a mother to another mother?

What did you think about last night’s episode? Leave your comments below!