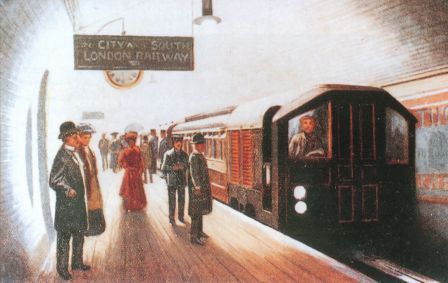 Four words sum up transportation in Edwardian England: Tube, train, tram, and car (which, incidentally, is the title of a 1903 book on the subject). Of the four, the tube was the most thrilling and least controversial advancement in technology. The Tube, or London Underground, had its roots in the 1840s, when it became the “world’s oldest subway tunnel.” Five decades later saw the opening of the City and South London, and Waterloo and City Railways, in 1890 and 1898 respectively. Oddly enough, the public was rather apathetic to this new mode of transportation, but the tide changed dramatically when in 1900, the Prince of Wales inaugurated the Central London Railway, which ran practically the entire length of London and charged only twopence between any two stations. Quickly dubbed “The Twopenny Tube” by the Daily Mail, the railway had stations at Shepherd’s Bush, Holland Park, Notting Hill Gate, Queen’s Road, Lancaster Gate, Marble Arch, Bond Street, Oxford Circus, Tottenham Court Road, British Museum, Chancery Lane, Post Office, and Bank. By the end of 1900, the railway had carried 14,916,922 passengers.

By 1910, the following stations were as follows:

Central London Tube, still frequently called the ” Twopenny Tube,” though the universal 2d. fare charged from the opening of the line in 1900 was abolished in 1907. About 6 miles. From Wood Lane, beyond Shepherd’s Bush, to the Bank.
Piccadilly Tube (Great Northern, Piccadilly and Brompton Railway). 9⅓ miles. Finsbury Park to Hammersmith, with spur line between Holborn and the Strand.
Bakerloo Tube (Baker Street and Waterloo Railway). 5 miles. From Elephant and Castle to Baker Street and Edgware Road.
Hampstead Tube (Charing Cross, Euston and Hampstead Railway). About 8 miles. Charing Cross to Euston and Camden Town; here the line forks, one branch proceeding to Hampstead and Golder’s Green, the other to Highgate.
City and South London Tube. 7½ miles. From Clapham Common to the Bank, Moorgate, the Angel, and Euston.
Great Northern and City Tube. 3½ miles. From Moorgate to Finsbury Park.
Waterloo Tube (Waterloo and City Railway). 1½ miles. From the South-Western terminus at Waterloo to the Bank.
Metropolitan Railway, or “Underground.” From Aldgate to Hammersmith and South Kensington and from Baker Street to Harrow and beyond. Forms with the District Railway the “Inner Circle”.
District Railway. From Barking and East Ham via Whitechapel to Kensington, Hammersmith, Wimbledon, Richmond, Hounslow, Ealing, Harrow, etc. Forms with the Metropolitan Railway the “Inner Circle.”

Elizabeth Robins Pennell described her experience with the Tube in an 1896 issue of Harper’s:

If study of the map demonstrates the underground’s sphere of usefulness, you have but to travel over its circles and extensions at certain hours and seasons to realize to what extent London’s millions have come to rely upon it. Should you chance to be abroad early enough, the working-man will crowd you out of third class carriages, half empty during the day; a few hours later and the city man. in his turn, will leave you no space in the first, entirely deserted once the period of his migration is temporarily at an end. Again at corresponding hours in the afternoon your right to first or third class seats will be as closely contested. Or you need but to come home at night with the multitude from Earl’s Court or Olympia, or set out for Hammersmith on the day of the Oxford and Cambridge boat race, to understand why dividends are regulated according to popular amusements.

In picturesqueness the underground makes rich atonement for vile atmosphere, for nervous wear and tear, and much else. It is in this respect that it leaves the elevated, cleaner and purer though the New York line may be, so far behind, and that it makes the electric road seem so ugly and prosaic. You receive no hint of its curious effectiveness from the entrance on the street ; that is, as a rule. A few stations have their qualities above ground as below; Charing Cross, for example, as I see it from my window, its walls flaming with many posters, on one side shut in by the lines of Hungerford bridge, on the other by the soft green of the shrubbery in the gardens and the branches of overshadowing trees. But Charing Cross is one of the exceptions. The ticket office, or booking office, to be English, is uncompromisingly ugly. In appearance it would have fared better had it been left on the low level of the platform as was originally intended. For once on the platform the grime and dirt and unsightly detail are lost in the beautiful play of light and shadow.

Rembrandt would have exulted in the rich darkness of the nearest distance ; in the way the daylight filters in through the glass roof or skylight above and mingles with the glare of gas and the red and green glow of signals ; in the bits of color that tell so well in the sombre surroundings—here the posters on the walls, here the books on the stalls, and there it may be the gay gown and flaunting feather of a lingering passenger ; and, above all, in the wonderful effects of the trailing outspreading smoke, as the train comes thundering in. There are stations where the track makes a great curve just before it reaches the platform, and engine and smoke cloud round it with a fine rythmical swing ;there are others where the low roof is supported by long lines of columns, and the smoke loses itself among them as in the dim aisles of a cryptlike basilica ; and there is not one without its distinctive features, its special picturesqueness. The marvel is that the artist has but just discovered the underground.

By this time, there was no outcry against women riding the tube as there had been when the omnibus made its initial appearance on London’s streets, and advertisements made pains to show well-dressed ladies taking the Tube from the West End to various genteel amusements. Plus, as stated above by Mrs. Pennell, the Tube was a rather democratic method of travel, and its popularity also played a role in the increase of suburbs, since a bank clerk in the City or a policeman were not forced to live in London to get to work on time!

6 replies on “Edwardian Transportation: The Tube”