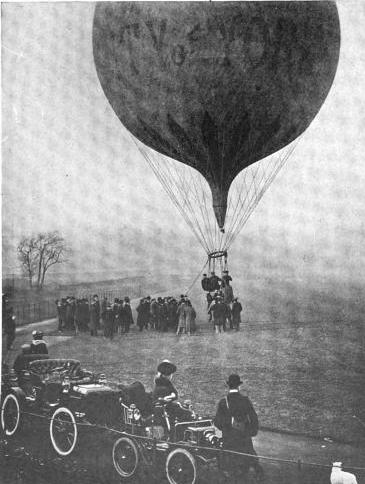 The air is the only element which remains to man to conquer for his own use and enjoyment. Consequently air ships are in the air, both in conversation and in fact; ballooning is the newest sport of the smart, balloon parties are the latest social departure, and membership of the Aero Club is sought alike by chic woman and scientific man. Balloons of great tourist tonnage are being devised. M. Santos Dumont meditates an air-ship on the lines of an Atlantic steamer, warranted to waft its passengers from Havre to New York within two days.

Meanwhi1e, the Aero Club, of 119, Piccadilly, exists to encourage ballooning in all its branches, from scientific war-waging aerial machines down to delightful balloon trips for members and their guests, starting from picturesque Ranelagh, or the inaccessible Crystal Palace. Ladies are chivalrously admitted to all the privileges of the Aero Club, save the use of the Club house, which forms part of the Automobile Club premises at 119, Piccadilly. Rumour hath it that the Aeroists themselves would not deprive their soaring sisters of the privilege of their Club house were it not for the well-known monastic tendencies of the Automobile Club, which relegate the woman motorist to some sort of Car Cloisters, and deny her entrance Piccadilly, either mobilist.

Few women have so far developed a taste for sky-sailing. But all who take a trial trip in the clouds become confirmed “balloonatics,” for there is no other sensation at all like it. No other pursuit or sport is quite so delightful as floating sky-high in a new atmosphere, discovering all sorts of lovely new scenery and cloud effects, and gazing down with a sense of superiority on the fussy small world below, which looks like a pitiful little Noah’s Ark farmyard set out for the amusement of grown-up Liliputians.

The main objects of the Aero Club are to encourage all branches of aeronautics, and to organise cloud excursions for the benefit of members who care to take part in these fascinating trips. The Club at present owns a membership of nearly three hundred, has an aerial stud of three balloons, and intends to largely increase its sailing stable as its list of members grows. All congresses, races, contests, and exhibitions of aeronautic subjects and machines are held under its auspices; the Club also acquires grounds from which ascents may be made, and arranges for all the paraphernalia needed to inflate balloons with hydrogen gas, etc. Doubtless all sorts of delightful aerial tournaments will be held under its aegis within the next few years.

A picturesque feature of this Club consists in the training of carrier pigeons to act as messengers between the clouds and the earth. In wartime such ballooning pigeons would serve a very useful purpose in carrying cipher messages to beleaguered towns and far-off troops. Indeed, ballooning, with its hundred sporting and pleasurable possibilities, is only in its tender infancy. And perhaps this is why it is so interesting, for who does not enjoy conquering a totally new world in this blase twentieth century, whose boast is that everything is played out?

Ballooning, anyway, is not blast nor played out. It is fresh and young and fascinating; and the writer recommends it from personal experience as an ideal and alluring pastime.

The Hon. Lady Shelley is a member of the Aero Club, and is ardently interested in ballooning. She is a daughter of Lord Llangattock, and sister of the famous motor racer, the Hon. C. S. Rolls, and is herself a keen motorist. Mrs. Templer, another lady aeroist, is particularly interested in military ballooning. Her husband, Lieutenant-Colonel Templer, has for many years commanded the War Office Balloon Factory, and has had most thrilling adventures in the air in India and many other parts of the world. He took charge of the balloon manoeuvres during the South African War, and the adoption ot military ballooning and the progress made in this direction in the British Army is entirely due to Colonel Templer.

If you want to go a-sailing heavenwards, the first step is to find your balloon—not always an easy matter. There is only one private balloon-owner in the United Kingdom, Mr. Leslie Bucknall, the ardent aeronaut, who keeps balloons as other men keep hunters. Vivienne I. has gone to the St. Louis Exhibition, and Vivienne III. is just brand-new, and has only lately taken her maiden trip. Mr. Bucknall baptizes his balloons after his pretty little daughter Vivienne, who delights in ballooning, but so far has only been allowed to take her flight in a “captive.”

If you belong to the Aero Club you may buy the pleasure of a prolonged balloon sail for the very small sum of two guineas, ascending at your “own risk,” and with no claim on the Club for any personal damage or injury resulting from the excursion. Of course, the possibility of accident is slight, but this is a necessary self-protective clause for the Club.

0 replies on “A Lady’s Adventures in a Balloon”