When I started writing historical romance set in the Gilded Age, I needed to know what level of sexual ignorance I was dealing with.

In my unscientific, random sampling of (cishet) primary sources, the Gilded Age scored 2.5 out of 4, which was a little better than I anticipated. Let’s investigate: 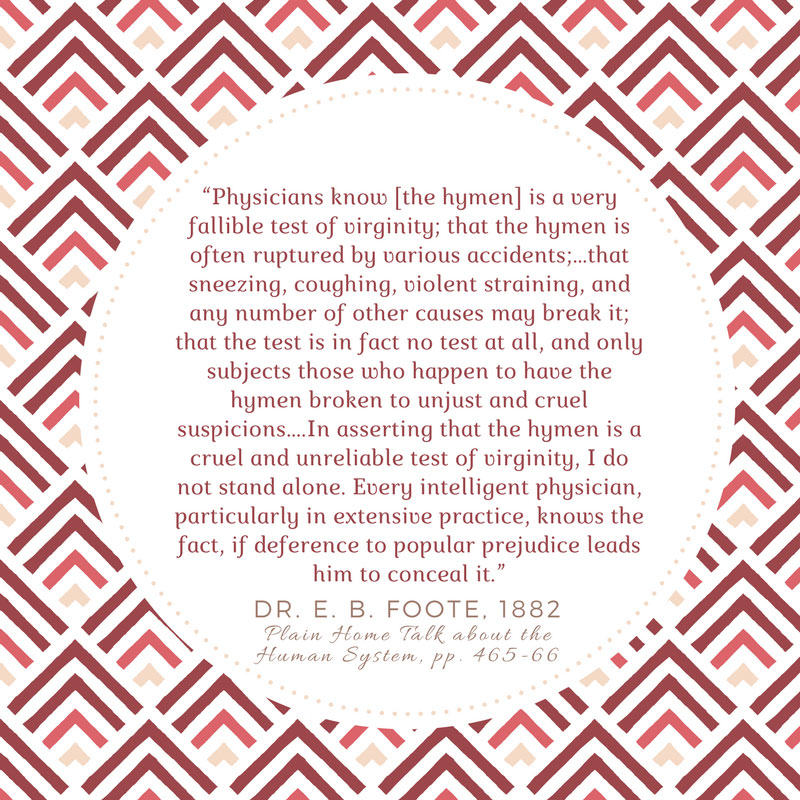 The hymen does not start whole—a perforation is needed to allow menstrual fluid to escape, after all—but a woman can easily tear and rub away the rest through an active lifestyle. Horseback riding, yes. Sneezing? Eh, probably not. But it was nice that Dr. Foote erred in her favor. It is also nice that he acknowledged that the hymen test was “cruel and unusual.”

However, it is depressing to also note that, due to “popular prejudice,” even the best physicians concealed the whole hymen truth. This led some fearful young women to try to “tighten” their vagina with alum, something I found discussed in a magazine of 1880 erotica (written by and for men). The alum suggestion wasn’t new—women had been encouraged to try this since medieval times—but it didn’t work then, and it still doesn’t. It just dries you out. There is no virginity test other than asking a person. 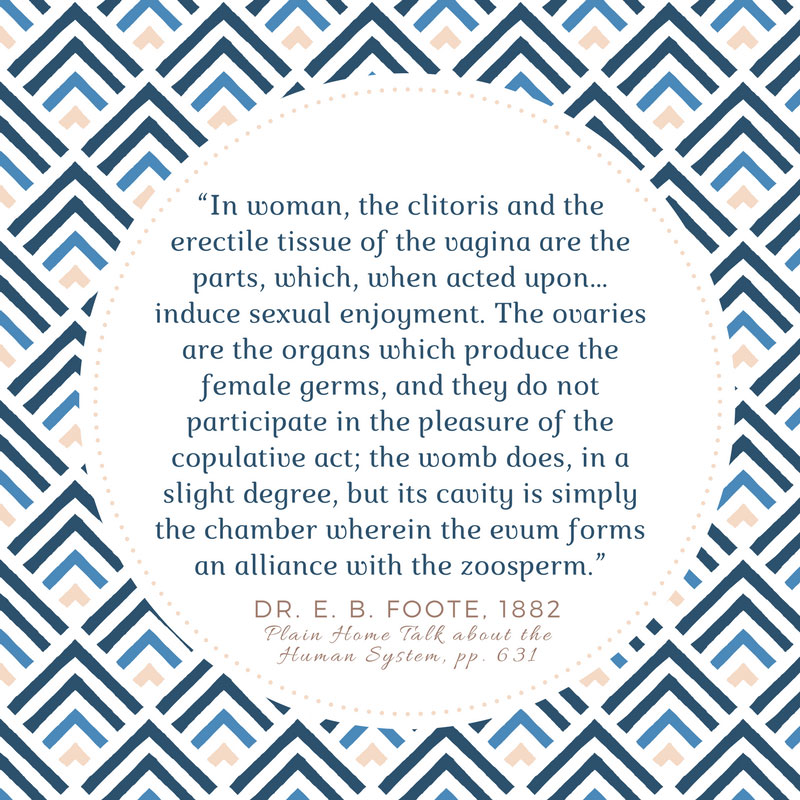 This may be the Gilded Age quote that surprised me the most. I had thought for sure that today’s popular culture would be more knowledgeable than 150 years ago, especially regarding the clitoris, but no! In fact, did you know that even in the eighteenth century, the most widely printed medical book in Europe and America informed men about the clitoris? Yay, cliteracy!

Fortunately, my heroine Allegra will have a Gilded Age anatomy book to guide her explorations. Every virgin should have one! Her hero, Ben, will appreciate her sharing her new knowledge with him, too. This is why I love writing romance, a genre that prioritizes the needs, strengths, and happiness of women. Real romance doesn’t ignore the clitoris! I’m going to cross-stitch that on a pillow someday. 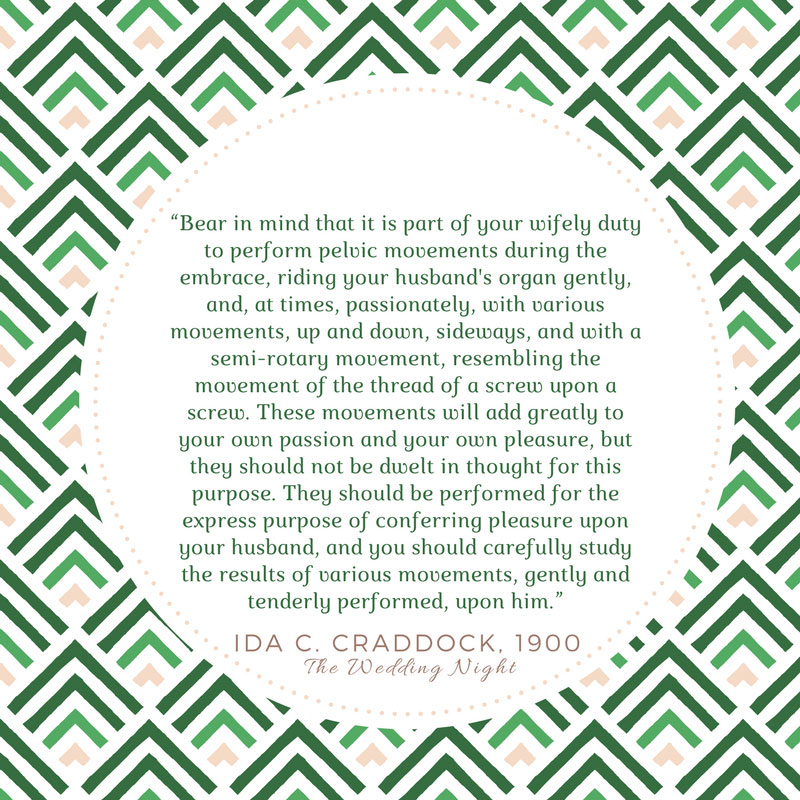 Pleasure and procreation may coincide, but one is not required for the other—for women. Herein lies a problem with how we teach (or don’t teach) women about their bodies. Even today, students may be taught reproductive biology, but that curriculum illustrates a prudish bias: a woman’s anatomy is described like plumbing, with pipes only used for pumping out children. In this narrative, only the male’s sexual pleasure is required for procreation, leaving the impression that men are the only ones who experience desire (or who should experience it).1

How sex-positive were Gilded Age experts? Did they think women should receive pleasure from the act? Dr. Foote, author of the above quote about the clitoris, believed that all aspects of sexual interaction—from friendly conversation to full, pleasurable intercourse—were absolutely necessary for good health: “I place sexual starvation among the principal causes of derangements of the nervous and vascular systems,” he said.

Now let’s check in with a woman, “sexual outlaw” Ida Craddock, who was sent to jail for sending “obscene” sexual education materials through the mail (to subscribers).2 Craddock’s description of a woman taking an active part in intercourse, even to the point of describing specific motions, is refreshing. She also claims that these motions will improve a woman’s sexual passion, which is encouraging. But—and this is a big BUT—Craddock believes the woman’s passion is irrelevant. A fortunate by-product, yes, but unnecessary. Bummer.

In fact, Craddock believed so strongly that sex was for procreation that her vision of contraception was coitus without orgasm—for both partners—for the entire duration of pregnancy and two years following. She thought this sexual brinksmanship would make both partners stronger. Three years of deliberate sexual arousal without release? No wonder Anthony Comstock, self-appointed male protector of American postal virtue, had her thrown her in jail.3

Overall, I’ll give the Gilded Age half a point here, and that’s being generous.

Your own pleasure starts with you:

Rosa did not have a lot of experience—none very good, at least—but neither did Jonas, it seemed. And Rosa knew something he did not. She knew what she liked.

“Look,” she said. She parted her lower lips to reveal the ridge that gave her the most pleasure when she was alone.

Or was this too much? To admit such a dirty secret, especially to a man—had she not learned her lesson? When she had tried to show Archie, he had lectured her about sin and a woman’s shame. Now she risked her husband’s disapproval, too.

Jonas looked up. “Show me what you want,” he said.

And it was shocking in the Gilded Age. Edwardian prophets took the above warnings and turned them into near paranoia. The same level-headed, seemingly enlightened Dr. Foote who criticized the hymen test, described the importance of the clitoris, and said sex was healthy—well, he had only dire warnings about masturbation in 1887: “Many a promising young man has lost his mind and wrecked his hopes by self-induced pleasures.” Another author agreed: “That solitary vice is one of the most common causes of insanity, is a fact too well established to need demonstration here.” (That logic is convenient: it’s so true that I don’t need to prove it. Hmm…)

Dr. Jeffries (1985) listed more terrible symptoms of this vice: a slimy discharge from the urethra, a “wasting away” of the testicles, ringing in the ears, heat flashes, large spots under the eyes, nervous headache, giddiness, solitariness, gloominess, and the inability to look the doctor in the eye. Others added cancer (!), acne (yep, that old hogwash), and a craving for salt, pepper, spices, cinnamon, cloves, vinegar, mustard, and horseradish. That last one is a head-scratcher. So if you wanted to eat anything with flavor at all, that was a giveaway? I’m in trouble.

The John Harvey Kellogg quoted above is the Kellogg of breakfast cereal fame. His obsession with sexual purity was so extreme that he never consummated his own marriage. He and his wife slept in separate bedrooms and adopted their children. By the way, who did Kellogg believe were the worst masturbatory offenders? Foreigners, of course. Russians especially. Add eye roll here.

The cure? Clean living! Rising early in the morning, eating the recommended bland breakfast, abstaining from smoke and drink, keeping busy, avoiding solitude, and circumcision. This is why the procedure became routine in American hospitals in the twentieth century and still predominates today. It is not good medicine but good morals. Or so they said.

1. What follows is a whole domino chain of bad decisions, including a teenage “hook up” culture that emphasizes sexual trophy hunting (most often by boys), rather than two people finding mutual pleasure in a mature relationship built on respect and trust.↩

2. The law against this distribution of “obscene” materials, the Comstock Law, is still on the books in a modified form. It no longer covers sexual education or contraception, the latter of which became a legally protected right—to married couples, originally—under the 1965 Supreme Court decision Griswold v Connecticut, also known as the Birth Control Revolution. Good thing, too, because this post would have gotten me jailed.↩

3. And she was not the only sexual rights crusader to have disturbing ideas. Marie Stopes believed in eugenics and forcible sterilization for those “unfit” to carry on their genes. She even “disinherit[ed] her son when he married a woman who had poor eyesight.” Yikes. And Planned Parenthood founder Margaret Sanger dabbled in eugenics, too, by the way. We need to question everything from this period because racism, classism, and ableism were pervasive.↩

4. The original purity food was the graham cracker, which was nothing like your s’mores building block of today. It was made of unrefined flour with no sugars or spices—deliberately bland. Because that contained sexual desire, didn’t you know?↩

2 thoughts on “Screw upon a Screw: Sex Education in the Gilded Age”