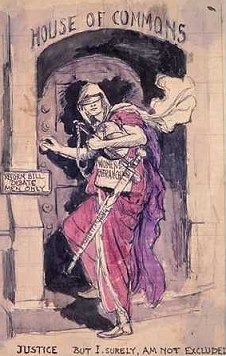 The militant suffrage movement in Great Britain began as a Pankhurst family enterprise that, from 1903 to 1905 remained focused around Manchester, until the general election of 1905 brought matters to a head. Prior to the Pankhursts, the fight for women’s suffrage in Britain was a relatively tame one. In the mid 1860s, a group of women, all pursuing a career in either medicine or education, formed a discussion group dubbed the “Kensington Society”. Their initial reasons for forming the group had little to do with suffrage; the seven founding ladies merely wished for a society of like-minded women of independent means and an interest in fields not normally associated with the female sex. It wasn’t until the topic of suffrage was raised that the Kensington Society discovered their mutual dismay. In reaction, they drafted a petition asking parliament to extend to vote to women. Presenting the petition to Henry Fawcett and John Stuart Mill, a pair of MPs known for their sympathy towards women’s suffrage, the Kensington Society saw their petition almost immediately shot down in Parliament. Vastly disappointed with the action, they formed the London Society for Women’s Suffrage. Soon thereafter, many cities in Britain found themselves hosts to similar societies.In 1887, seventeen of these groups formed the National Union of Women’s Suffrage Societies, or NUWSS. Under the presidencies of Lydia Becker and Millicent Fawcett, the society raised awareness of the cause by holding meetings, holding marches, printing pamphlets and newsletters, and writing politicians and petitions. NUWSS also lent support to Josephine Butler’s campaign against white 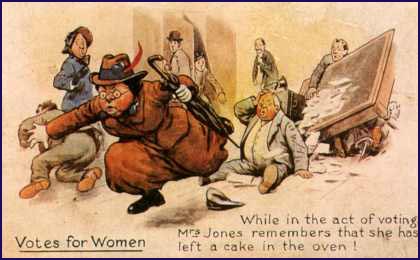 slavery as well as Clementia Black’s attempts to force the government to protect low-paid women workers. Inoffensive, efficient and ladylike, NUWSS attracted support from all walks of like—including a good number of men.The cause chugged along in this manner until the Manchester group splintered, and the women, led by Christabel Pankhurst, grew fed up with the constitutional methods NUWSS favored.

A far cry from the genteel group from whence they came, the WSPU immediately showed its difference in the fact that it attracted women from the working and middle-classes—women who were less inhibited by the traditional trappings of “ladyhood”. Though at first fearing the stance the WSPU took would harm the cause, the NUWSS admired their courage and refused to speak out against them. 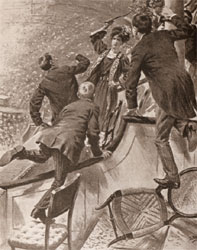 By 1905 public interest in women’s suffrage had waned, and the WSPU made a decision that would forever change the face of the suffragist movement. Traveling to London to hear a speech by Sir Edward Grey, Christabel Pankhurst and Annie Kenny threw down the gauntlet by interrupting Sir Edward’s speech with the cry of “Will the Liberal Government give votes to women?“.

The women were soon after charged with assault and arrested. Christabel and Annie then proceeded to shock the world when, after refusing to pay the five shilling fine, they were thrown in jail. Never before had English suffragists resorted to violence to support the cause and newspapers were quick to pounce on this new movement, nicknaming the followers of militancy “suffragettes“. Far from decrying this derogatory term, the WSPU adopted it with pleasure, the term separating them from the civil actions of the NUWSS.

Moving their headquarters from Manchester to London, by 1908 the suffragettes had launched an all-out war for the cause, targeting those MPs notoriously anti-suffrage like Prime Minister H.H. Asquith and Winston Churchill. The suffragettes marched through London, interrupted speeches, assaulted policemen attempting to arrest them, chained themselves to fences, sent letter bombs and damaged property–the most infamous being their destruction of the windows of department stores and shops in Bond Street. Viewed as unfeminine due to many of the women being unmarried and involved in careers instead of housework, the Establishment were at a loss as to how to deal with suffragettes. They baffled the common perceptions of Victorian womanhood and once released from jail, merely went out and repeated the same misdemeanors. Using this loophole in the justice system, the suffragettes increased their militant campaigns, including a devastating arson campaign during which attempts were made to burn the houses of anti-suffrage MPs, railway stations, golf courses, cricket fields and racecourse stands.

When the jailed suffragettes went on hunger-strikes while incarcerated, the government passed 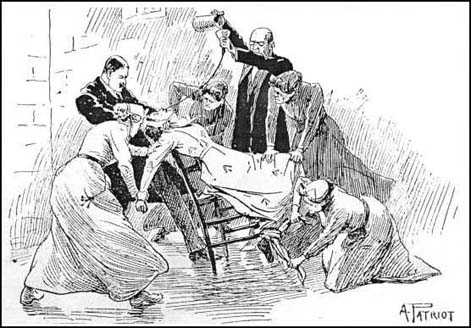 the “Cat and Mouse Act”: if a suffragette went on a hunger strike, once ill she would be released from prison and re-arrested when well again. However, by the summer of 1914, the militant campaign was exhausted by the imprisonment, exile or poor health of the WSPU’s leading members (Christabel had fled to Paris in 1912 to escape arrest) and the number of active members able to continue the violence was now very small. Naturally, WWI put a damper on the suffrage campaign, and both the WSPU and NUWSS focused their energies on the war effort, using their platforms to drum up support for the troops. But ever antagonistic to the end, the WSPU took patriotism to their breast as much as they did suffrage, using their newspaper to attack those in power they saw as pacifists or communists.

3 replies on “Shoulder to Shoulder”