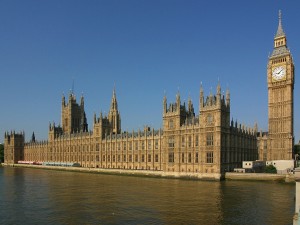 London immediately conjures images of Almack’s, Buckingham Palace, or Hyde Park, and most famously, the Houses of Parliament (or to be more correct, the Palace of Westminster, and the Clock Tower, which is colloquially known as “Big Ben”.) Oddly enough, our perception of Westminster Palace, whose spiky spires jabbed the skyline beside the Thames, was unknown prior to 1834, the year of the fire which consumed most of the Palace and the adjoining St. Stephen’s Chapel. Also, the reconstruction of the Palace was not completed until 1870, leading me to assume our lords and MPs thundered and raged debates in the midst of hammers and trolleys until then.

To familiarize you with the daily workings of Parliament, I have commenced with a (hopefully) bi-weekly peek from behind the grille of the Reporter’s Gallery. Among the future topics to be addressed include: THE HOUSE OF COMMONS, THE HOUSE OF LORDS, WHEN PARLIAMENT SAT?, WHO SAT IN PARLIAMENT?, HOW DID ONE GET ELECTED TO PARLIAMENT?, GIVING A MAIDEN SPEECH, BYE-ELECTIONS, POLITICAL PARTIES, WOMEN IN POLITICS, WHAT DID THE PRIME MINISTER DO? and so on and so forth. If anyone has any topic they’d like me to elaborate on, drop me an email.

First however, here is a map of the Houses of Parliament. 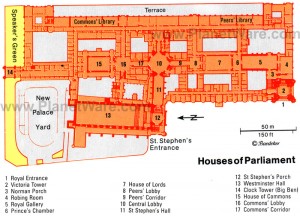 0 replies on “Daily Life in the British Parliament Pt I”