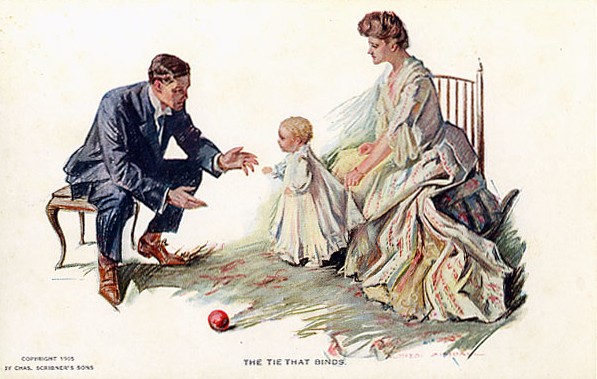 Two things caught my eye recently: the increasing popularity of “old-fashioned” Edwardian names in The Times (subscription) and the speculation over the name of the Duke and Duchess of Cambridge’s first child. As a writer, choosing the names of my characters is almost as daunting as the prospect of naming my (future!!) children–I can’t move on if the name doesn’t “fit,” and I will scour IMDb, pages of Wikipedia entries, books about the peerage, and baby name websites until I find one that does. Sometimes–the lucky times–the names appear in my head without any explanation (such as the names of the protagonists in Mine Is The Night, Huw and Leonore)!

Naming fads of the Edwardian era followed the fads of the Victorians: family names, names of influential godfathers/mothers (To Marry an English Lord lists the many half-American babies saddled with the name “Albert Edward”…the more fortunate were christened after Queen Alexandra!), flowers, virtues, classical figures, and the like. A major surprise, unearthed by Ancestry.co.uk in this 2009 article in The Telegraph, is that the Victorians were not exempt from quirky names like Brooklyn or Apple:

Brooklyn, the name of the Beckhams’ first born, was first used in 1870 for a baby called Brooklyn Revell Moorey.

Katie Price was also copying the Victorian era when she and Peter Andre named their daughter Princess – the name was first registered in 1847 and has since been used at least 1,800 times.

Victorian parents appeared to follow pop culture as much as today – Ellen became a particularly popular name in the 1870s the same time as the Shakespearean actress Ellen Terry reached the height of her fame.

Annie was the most popular girl’s name between 1887 and 1896, influenced by Annie Oakley, an American sharpshooter and star of the touring show Buffalo Bill’s Wild West who performed in person for Queen Victoria.

And Joseph entered the top ten of names between 1907 and 1915 thanks to politician Joseph Chamberlain.

Literature also had an influence, with a rise in the popularity of the name Alice following the publication of Alice’s Adventures in Wonderland in 1865.

Another name that passed from pop culture to the baby name bank is “Wendy”. Though Behind The Name claims it was related to “Gwendolen,” it became the trendy name of 1904 with the popularity of J.M. Barrie’s play, Peter Pan.

The Victorians and Edwardians could be quite fanciful when naming their children, but none so fanciful as the Reverend Ralph William Lyonel Tollemache-Tollemache, who really let loose his eccentricities when naming the ten children born of his second marriage:

Poor children! Imagine needing to sign your name in school.

Read Eleanor Nickerson’s analysis for further name trends during the Edwardian era that were distinct from the Victorians!

12 replies on “Baby Names in the Edwardian Era”