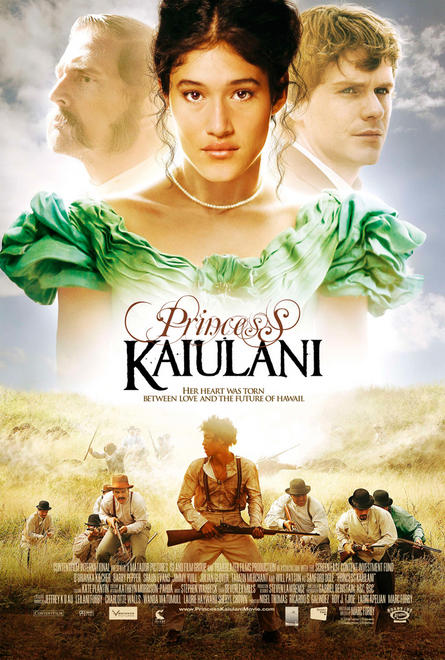 Released in 2009 (though with a fair share of controversy over the admittedly tasteless title, “Barbarian Princess”), with limited run last year and a DVD release in September, Princess Kaiulani is a gorgeously-shot tale of an unjustly forgotten figure in American history. Though the writing isn’t as nuanced as it could be, and there are many holes in the tale which require further reading after viewing the tale, for a movie which sheds light on a dark, yet fascinating period not often told outside of Hawaiian history, Princess Kaiulani is an excellent addition to the library of any history buff and period film aficionado. The film follows Princess Victoria Kaʻiulani Kalaninuiahilapalapa Kawekiu i Lunalilo Cleghorn (to give her full name) from shortly before her mother’s death to her own premature death at the age of 23. In between that regrettably short time span, we are shown the tenuous state of Hawaii’s royal family and its inhabitants.

The first documented contact between Hawaiian inhabitants and European explorers was in the late eighteenth century, when an Englishman named James Cook came across the island and named it the “Sandwich Islands” in honor of his patron, the 4th Earl of Sandwich. The first half of the nineteenth century saw an influx of European visitors, whalers, explorers and so on, in particularly the British, but as with European contact with Native Americans, these new people brought diseases which, by the 1850s, decimated 1/5th of the Hawaiian population. By this time as well, the House of Kamehameha reached prominence, but the death of the childless King Kamehameha V in 1872 left the kingdom without an heir, and the subsequent power struggle between Kalākaua and Queen Emma, Kamehameha’s widow, opened the door for British and American intervention. The House of Kalākaua eventually gained preeminence, and it is from this dynasty that Princess Victoria Kaʻiulani descended.

The reign of her uncle, King Kalākaua, and then of her aunt Queen Liliʻuokalani, were tumultuous. Hawaii’s sovereignty was threatened both by the country’s prosperous white minority, but by the growing imperialist desires of America. The concept of “Manifest Destiny” reached its fruition by the 1880s and 1890s, and with European powers dominating Africa and Southwest Asia, the United States could look only West (or, rather East, to Asia) and South for their own “place in the sun.” The first major blow to Hawaii was the Bayonet Constitution of 1887, which stripped King Kalākaua of his personal authority and established a constitutional monarchy patterned after Great Britain. After his death in 1891, fears that Queen Liliʻuokalani planned to overturn the constitution and re-instate the previous absolute rule of her family dynasty prompted the overthrow of the Hawaiian king in 1893. As her aunt’s heir, Princess Kaʻiulani had been sent to be educated in England in 1889, but the events of 1893 prompted the now 18 year old to return to the land of her birth and people to fight for her country’s rights.

Though shy, upon reaching American shores, she made this forceful speech to a waiting public:

“Seventy years ago Christian America sent over Christian men and women to give religion and civilization to Hawaiʻi. Today, three of the sons of those missionaries are at your capitol asking you to undo their father’s work. Who sent them? Who gave them the authority to break the Constitution which they swore they would uphold? Today, I, a poor weak girl with not one of my people with me and all these ‘Hawaiian’ statesmen against me, have strength to stand up for the rights of my people. Even now I can hear their wail in my heart and it gives me strength and courage and I am strong – strong in the faith of God, strong in the knowledge that I am right, strong in the strength of seventy million people who in this free land will hear my cry and will refuse to let their flag cover dishonor to mine!”

Her poise, her modern dress, and her intelligence shocked everyone, for the media had been prepared to greet a “barbarian” and “heathen”, not a woman who could speak four languages and speak well in all of them. However, despite the growing press surrounding her, her meeting with President Cleveland, and attempts to force the government to leave Hawaii be, the Republic of Hawaiʻi was declared in 1894. A counter-revolution was attempted in 1895, but when a cadre of weapons was discovered on palace grounds, Queen Liliʻuokalani was placed under arrest, tried by a military tribunal of the Republic of Hawaiʻi, convicted of misprision of treason and imprisoned in her own home. Princess Kaʻiulani finally returned to Hawaii in 1897, now considered a private citizen of the republic. Her frail health turned for worse in 1898 when caught in a storm, and another illness dealt another blow, until she finally passed away March 6, 1899 from what many say was really of a broken heart.

Q’Orianka Kilcher portrays this forgotten princess with much sensitivity and skill, and though the script plays with historical license (particularly in beefing up a love interest), it stays true to the spirit of Princess Kaʻiulani and her family, and presents a fair view of the overthrow of the Hawaiian kingdom. Purchase the DVD or streaming at Amazon.