During Victoria’s reign, the Court Drawing Rooms were held in Buckingham Palace at four stated periods every year–two before Easter and two after. Levées, hosted by the Prince of Wales for the presentation of gentlemen, were held at intervals during the like season in St. James’s Palace. Though of lessening distinction as the Victorian period wore on, the delicious prospect of being presented to the Queen or Prince of Wales continued to be a beacon to ambitious social climbers.

When the date of a drawing room was announced, letters poured into the Lord Chamberlain, suggesting names of ladies for presentation. Everyone who had kissed the Queen’s hand was able to nominate another for presentation. But it wasn’t guaranteed that any name submitted was accepted. The list underwent careful scrutiny by both the Lord Chamberlain and the Queen, Her Majesty only receiving those who “wore the white flower of a blameless life.”

There were only three qualifications for admittance to the throne room:

Summonses were sent out three weeks in advance, allowing ample time for the excited debutante or newly married lady, to practice the complicated court curtsy and order the regulated costume demanded for presentation, as laid out, via the Lord Chamberlain’s Office, in Lady Colin Campbell’s Manners and Rules of Good Society, 1911 edition: Full Court Dress: low bodice, short sleeves, and train to dress not less than three yards in length from the shoulders. Whether the train is cut round or square is a matter of inclination or fashion. The width at the end should be 54 inches. It is also imperative that a presentation dress should be white if the person presented be an unmarried lady and it is also the fashion for married ladies to wear white on their presentation unless their age rendered their doing so unsuitable The white dresses worn by either debutante or married ladies may be trimmed with either colored or white flowers according to individual taste.

High Court Dress: dress of silk satin or velvet may be worn at Their Majesties Courts and on other State occasions by ladies to whom from illness infirmity or advancing age the present low Court dress is inappropriate. Bodices in front cut square or heart shaped which may be filled in with white only either transparent or lined at the back high or cut down three quarters height. Sleeves to elbow either thick or transparent. Trains, gloves, and feathers as usual. It is necessary for ladies who wish to appear in High Court Dress to obtain Royal permission through the Lord Chamberlain. This regulation does not apply to ladies who have already received permission to wear high dress.

White gloves only should be worn excepting in case of mourning when black or grey gloves are admissible. As a lady on presentation does not now kiss the Queen’s hand as formerly she did she is not required to remove the right hand glove before entering the Presence Chamber. This order therefore is no longer in force and a lady wearing elbow gloves and bracelets will find it a great convenience not to be to take off her glove. 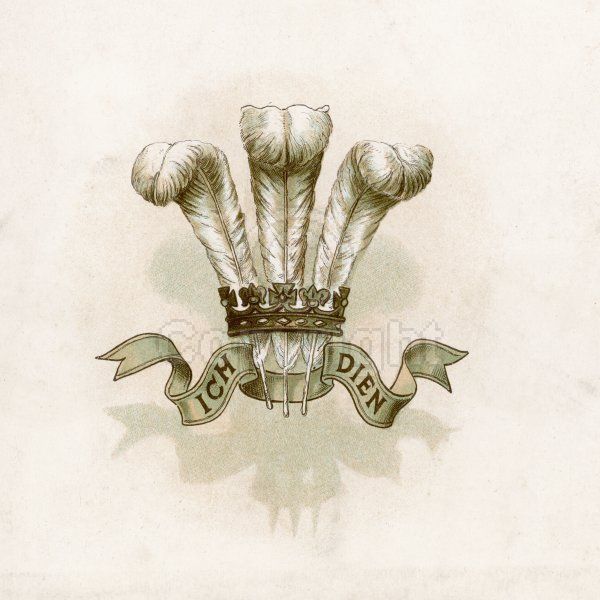 White veils or lace lappets must be worn with the feathers. The veils should not be longer than 45 inches.

Bouquets are not included in the dress regulations issued by the Lord Chamberlain although they are invariably carried by both married and unmarried ladies. It is thus optional to carry a bouquet or not, and some elderly ladies carry much smaller bouquets than do younger ladies. A fan and a lace pocket handkerchief are also carried by a lady on presentation or on attending a Court but these two items are also altogether optional.

Armed with the proper arsenal, the young lady 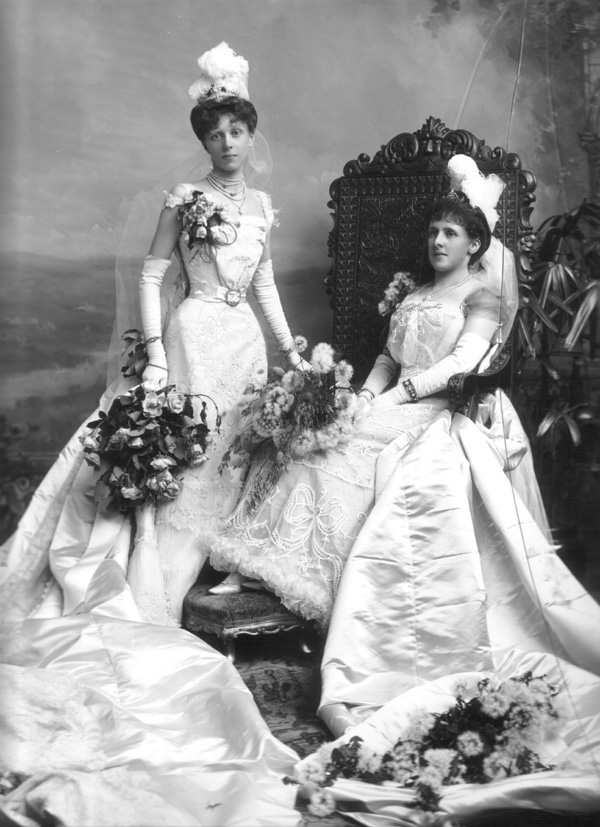 or new wife was ready to take London by storm. Queen Victoria held her presentations in the afternoon at 3 o’clock, which caused a traffic snarl of monumental proportions. It was common for the débutante to queue up in her carriage for hours down The Mall towards Buckingham Palace, boxed in on both sides by other equipages and the throng of curious onlookers. Then, once she alighted from her carriage, there was another long wait in the close, sweltering palace antechambers, where neither refreshments nor relief were available.

The young lady who persevered to the end, however, got her rewards. Carrying her train over her left arm, she made her way through the groups of attendants to the anteroom or corridor where one of the lords-in-waiting, with his wand, spread out her train she’d let down, and walked forward to the Throne Room.

Her name was announced as she curtsied before the Queen, so low as to almost kneel, and while doing such, she kissed the royal hand extended to her, underneath which she placed her own ungloved right hand. The peeress or daughter of a peer received a kiss from Queen Victoria. When the Princess of Wales stood in for Her Majesty, the lady being presented curtsied only and did not kiss the Princess’s hand. After passing Her Majesty, the débutante curtsied to any of the Princesses near her and retired backwards in what may be called a succession of curtsies until she reached the threshold of the doorway. The official in attendance replaced her train upon her arm and the presentation was complete!

As was stated above, the reception of a kiss on the cheek from the Queen or the gift of one upon her hand was tossed out when Edward VII came to the throne. Other, more important changes were made to the presentation ceremony. Things were sped up by his reign, the drawing rooms and levees switched to the evening and held in June; the telephone used to summon a débutante’s transport, thus easing the traffic; buffet supper, served from tables laid with gold plate helped to revive waiting ladies; and the court photographers were allotted a room for speedy snapshots of the women. 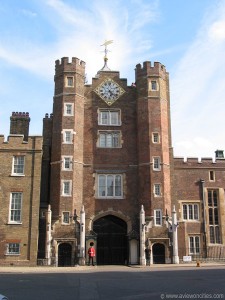 The workings of the levee were similar to those of the drawing rooms: dates announced and names submitted, and specific court dress required:

The Dress to be worn at Courts State Functions and Levees: Full dress uniform is invariably worn by all gentlemen entitled to wear it. All officers Scottish kilted corps should wear the kilt irrespective their being mounted officers or not. Gentlemen who do not wear uniform may wear either velvet Court dress new style; velvet Court dress old style; cloth Court dress.

The velvet Court dress old style is very similar to the foregoing with the addition of a black silk wig bag at the back of the neck and lace frills and ruffles.

On certain days of the year, the so-called Collar days, high diplomatic and distinguished personages wear the collars and badges of the Garter, Thistle, St Patrick, Bath, and other Orders of Knighthood. 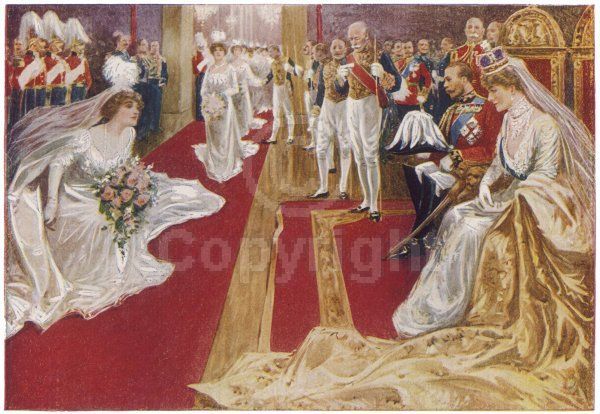 The rules and regulations for being presented at a drawing room or levee were strictly adhered to, but the practically “open sesame” granted towards those who wished to enter society (with a little “s”), the air of exclusiveness granted court circles in the early decades of the Victorian era had nearly dissipated. Under the aegis of the convivial and bon vivant Prince of Wales, later Edward VII, anyone who could entertain and be entertained was welcome in his circles. It was a trend that, if not the numbers of middle-class men entering Parliament, the self-made millionaires being ennobled or knighted, or the hordes of Americans and Continental aristocrats flooding British shores for the season, hunting, shooting, racing, and other amusements–and vice versa–sorely tried the aristocratic and royal prerogatives that kept social climbers firmly out.

By the 1880s, American writers cynically shared that “in time it became possible to achieve a Court introduction without the intercession of the American Envoy, simply by arousing, through means it would not be discreet to name, the interest of some English noblewoman whose exchequer was at a low ebb.” However that may be, this brief brush with royalty continued to be considered a stamp of social approval by nouveaux riches and foreign nobodies until its demise in 1958.

32 replies on “The Court Presentation”