Between 1886 and 1902, Charles Booth, a successful businessman and social activist, worked on creating the first real study on the social life of London. Booth wished to discover how many people in London were living in poverty and to expose the problem as a real issue, instead of just an estimate by the politicians of the times, which they used to further their own personal agenda. 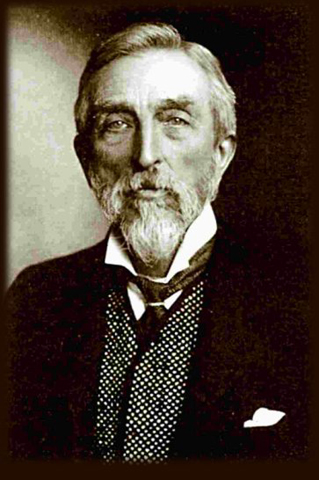 London of the 19th century was a strange mix of poverty and extravagant wealth. By reading Booth’s detailed notes as he walked the streets, you get to see the social divide expressed in the landscape of London City. Color coded maps break down the city into the rich playground, and the poor slums. Each color signified a different poverty level.

Black: Do not go there. You are likely to robbed and taken advantage of by the
extremely poor people who live there.

Dark Blue- The people who live here, live in poor housing, constantly have no
money and generally go without the basic necessities of life.

Light Blue- People who live in this area are poor but have a wage coming in;
about 18-21s a week.

Purple- The people who live here are a mix of the very poor, the moderately
poor, and the well off.

Pink- These people earn enough to live comfortably and do not usually have to
do without.

Red- The people who live in these areas are middle-class. Made up of shop
owners and merchants, they have money to spend on the luxuries of life.

Yellow- The people who live in these areas are upper class and lucky from
birth. 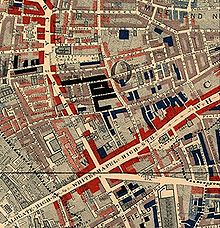 These maps show a living, breathing London, and the various notes taken by
Booth, adds to the emerging picture. There were the dirty, unsafe streets,
filled with vagabonds, thieves and prostitutes, while at the other end of town,
there were stately homes, restaurants, shops and well dressed men and women, with money to spend.

Occasionally the outward signs of poverty spilled into these areas in the form
of beggars, hoping to take away a small piece of the wealth around them, or in
houses of ill-repute, which serviced the young lords with wild oats to sow. To
create his map of London’s poverty, Charles Booth followed policemen around on their usual routes. These policemen were familiar with the characters on their beat, and pointed out the trouble areas, where various illegal activities took place. Booth took copious notes, and to read them is like stepping back into a time capsule, allowing you to walk the streets as they once were, and experience  the good and the bad.

Using excerpts from these notebooks, I hope to introduce you to a good area of London and then the bad side of town, to experience the social and economic differences of London of the 19th century from the words of those who actually experienced it as it was.

The Poor Side
Old Street
Transcript
“As to the changes in the neighborhood, Machel said that warehouses had
encroached upon dwellings to such an extent in the past ten years that the poor working class who used to live in the district had been driven elsewhere to Toltenham and Walthamstow. Some motel dwellings had been put up but the class that came to them was different to which had left…Of the working classes that remain there is a considerable mixture of criminals, principally pickpocket and housebreakers who worked in either the east of the city or west London. It is also a centre of the receiving of stolen goods. This and Clarkenwell adjoining may be called the `melting pot,’ of London. Practically all silver and jewels that are stolen come here for disposal and are either broken up and melted or dismantled….The housebreaker or ware-housebreaker is a higher class of man than a pickpocket. Pickpockets `do’ a little every day but a housebreaker is often a respectable citizen for a month or two while he makes his plans…”

If you are interested in finding out more about Charles Booth, or reading more
of his notebooks, the Charles Booth Online Archives can be found here:
https://booth.lse.ac.uk/