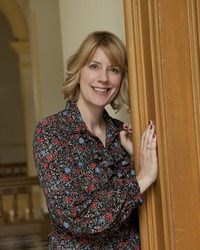 Sharon Biggs Waller is the author of debut young adult novel, A Mad, Wicked Folly. From her biography on her about page you can find out she is well placed to write an Edwardian novel, having worked at Buckingham Palace, where she had the opportunity of meeting Queen Elizabeth. Her novel has been named one of the Top Ten Historical Fiction for Youth and was nominated for the ALA Amelia Bloomer Project.

How did you come up with the title ‘A Mad, Wicked Folly’? How does it relate to the characters and theme of the book?
The title comes from a letter Queen Victoria wrote in 1870 in response to a report of a meeting in favor of women’s suffrage. She called “Woman’s Rights” a mad, wicked folly.  And stated that the woman named in the report “ought to get a good whipping.”  The hypocrisy in this statement is so incredible to me, coming from a person who was the most powerful woman in the world at the time.  She had no idea what life was like for women who weren’t rich or royal, and how much they needed to have a voice.  As far as my novel and characters go, the title reflects the story’s theme: the death of a dream, preventing someone from being who they really are, giving up on an authentic life, failing to stand up for something you believe in, marrying the wrong person, remaining in a situation because it’s safe, swallowing your own opinions because they are frowned upon…these are all mad, wicked follies.

At one point Vicky poses nude for an art class. Do you have any favorite Edwardian art or artists?
Yes, Vicky poses nude at the beginning of the book.  She’s taking a life drawing class on the sly, and one day when the model fails to appear she volunteers.  Vicky doesn’t feel it’s right to ask someone to do something that she’s unwilling to do.  And this is also a big part of her character arc in the book, especially when she meets the suffragettes.  “Deeds not Words,” was their motto, and Vicky learns how important this philosophy is as the story unfolds. As far as Edwardian artists, I absolutely love J.W. Waterhouse, who was an inheritor of the Pre-Raphaelite Brotherhood.  The PRB was a group of Victorian artists who painted myth and legend and the natural world.  Waterhouse’s A Mermaid is Vicky’s favorite painting and it features heavily in the book. It’s also my favorite!  It’s housed in the Royal Academy of Art in London but it’s not on display, sadly.  I would love to see it in person someday.

A Mad, Wicked Folly shows a young woman rebelling against tradition. Did you ever go through a rebellious time in your life? How much of her journey can you relate to?
I never really rebelled like she did mainly because my parents were very encouraging when I was growing up.  They wanted us to follow our hearts and dream big, and they would help us out as much as they could.  They couldn’t afford a lot, but they would do what they could.  I wanted a horse so badly, but even though that was out of the question, they made sure I went to horse camp every year and took lessons through the YMCA.  The rest was up to me.  This is how relate to Vicky.  I had to find a way to get horses in my life, so I turned over rock.  When I was 14 I actually called people who had advertised horses for sale in the newspaper.  I figured if they were selling, they probably didn’t have time to ride.  I was right.  I found a farm that needed help with their horses and one thing to the next.  I really learned that if you want something bad enough, you could make it happen.  It also took me 17 years to find an agent.  I promised myself I wouldn’t give up and I used every rejection to get better at writing.  You have to have patience and confidence in yourself, and that comes in time.  Vicky had to learn that there is no easy way; that sometimes the better life and better opportunities are found down that road less travelled.

What did you want to become when you grew up?
Oh, gosh, so many things!  I was a creative kid so I came up with a lot of ideas.  I wanted to be a ballerina, an archeologist, a park ranger, a conservationist, and a horse trainer.  I did become a park ranger and a horse trainer, and I suppose I’m a conservationist now with my organic farm.  I never imagined being a writer.  I was really good at writing in school, and I loved it, but I wanted to be outside, not inside tied to a desk.  I did a lot of writing as a part ranger, and then later after I had shoulder surgery, I started writing for horse magazines.  That led to writing novels and here I am now.  I live on an organic farm next door to a national park, so I divide my time between inside and outside.  The best of both worlds!

Have you ever had to give something up to get what you wanted?
Well, I gave up my horses to move to England.  But I found good homes for them and I was ready for a new adventure.  I have horses now, but I’m not so intense about them.  I used to train dressage, and I was really serious about it.  It was basically all I did.  So I gave that up to move overseas, and although I had a chance to train again in England, I wanted to travel and write and do other things.

Find out more about Sharon and her work on a variety of social media websites, where you can easily go and say hello.

0 replies on “Interview with Sharon Biggs Waller, Author of ‘A Mad, Wicked Folly’.”