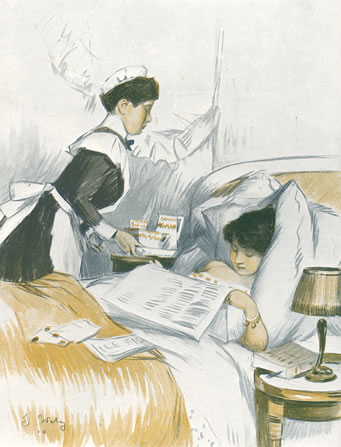 And here is another batch of interesting links to kick your week off right!

1890s recipes for Christmas Bread from The Old Foodie.

One of my favorite book bloggers, Tasha B, created a list of the perfect gifts for Janeites at Heidenkind’s Hideaway.

Earlier this year, BBC News stepped inside of the home of Louis Mantin, a wealthy Moulins gentleman whose will stipulated that his mansion be turned into a museum one hundred years after his death in 1911.

Tracy Grant of the History Hoydens, discusses the use of servants in her novels and her favorite fictional belowstairs characters.

35 Fictional Males to Swoon Over, or Stylist.co.uk’s list of Leading Literary Men We Love.

The Joliet Area Historical Museum opens their archive of 150 years worth of children’s toys for display.

For Australian history enthusiasts, the 11th of this month is the last chance to visit Old Highercombe Hotel Museum’s display of rooms decorated in Christmas of yesteryear, “including a Dickens room, Australian Christmas in the 1900s, Christmas Day in WWI, 12 days of Christmas, traditions and carols”.

The Seattle Times explores the tunnels beneath the city.

A 21st century artisan handcrafts feather trees, which were imported from Germany in the 1880s, and remained popular until WWII.

The Smithsonian takes a look at Herman Hollerith’s groundbreaking invention of the tabulating machine.