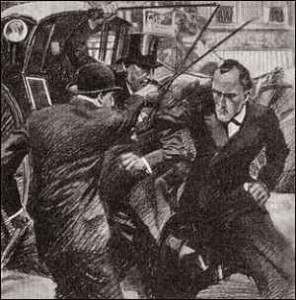 Contrary to popular belief, Sherlock Holmes was rather a cutting-edge Victorian gentleman. Guy Ritchie’s version of Conan Doyle’s immortal sleuth does err on the side of too much physicality, but otherwise, Holmes was a fighter as well as a deducer. The sport in which he indulged was bartitsu (Doyle misspelled it as “baritsu”, though scholars have yet to deduce whether this was intentional), a style of martial arts devised by Edward Barton-Wright around 1898. Having spent the previous three years in Japan, Barton-Wright developed his method for self-defense from the various styles of jiu-jitsu, from boxing, from Swiss wrestling, from a French kick-boxing style named “Savate“, and the stick-fighting method created by Swiss master-at-arms, Pierre Vigny.

Barton-Wright spent the next four years promoting and developing this new sport (a portmanteau of jiu-jitsu and his own surname) in London by opening up a school devoted to bartitsu, holding public demonstrations, conducting interviews, and writing copious articles and a book expounding on the physical and mental benefits of the sport (this was the era of “Muscular Christianity”). The school, named The Bartitsu Academy of Arms and Physical Culture, but known informally as the Bartitsu Club, was located at #67b Shaftesbury Avenue in Soho. In an article for Sandow’s Magazine of Physical Culture vol. 6, (January 1901), journalist Mary Nugent described the Bartitsu Club as “… a huge subterranean hall, all glittering, white-tiled walls, and electric light, with ‘champions’ prowling around it like tigers.” Barton-Wright brought Japanese jiu-jitsu masters to train and fight at his club, and it soon became a hub of extreme physical culture. Nugent, however, also shared that despite Barton-Wright finding “their inclination to haggle over lesson prices ‘a little tiresome;, women were actually welcome to train at the Club. The memoir of another of the instructors, the Swiss wrestler Armand Cherpillod, includes a very cloak-and-dagger tale about his teaching a wealthy woman at the Club, only to later discover that she was a “plant” who was passing his wrestling tricks on to his opponents in forthcoming matches. 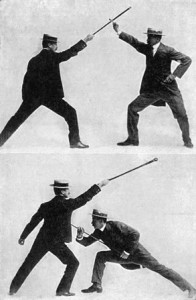 The fame of bartitsu and the Bartitsu Club grew quickly, and gentlemen as far abroad as India rapidly acquired the skills Barton-Wright wrote of in his books, interviews, and articles. Barton-Wright’s prowess became legendary, and his claims to have defeated seven men within three minutes during a public match caught the eye of the Prince of Wales, who ordered a personal demonstration. What made the sport so quickly popular was its relative ease of adoption; much of the moves involved ones own body and more likely, one’s cane or walking stick. Since the late Victorian/early Edwardian era was the heyday of the walking stick, the claim that a single gentleman, skilled in bartitsu, could beat away a band of ruffians armed with “cudgels, knives, shillelaghs, bonkers, batons, and even truncheons,” was immensely appealing. The combat was extremely simple to pick up, as it was remarkably similar to fencing:

First, as regards clothes : all that is required is a suit of flannels and a pair of shoes without heels; the masks should be of cane similar to the pattern used for single stick and well padded over the cheek. Gloves are not generally used to guard the hands as there is no need for them when a man is fairly proficient.

It is taken for granted that the reader is familiar with the ordinary attitudes adopted in fencing; that is, as regards position of the legs at ”the engage” and when lunging.

“On guard”-~ Assume the position of the fencing engage but with the right hand raised slightly above the head, arm nearly straight, keeping the stick nearly horizontal point to the front, left arm hanging down behind and kept well out of the way.

Note: After making hits, guards and points always return to this position as soon as possible, and remember that all the positions described apply equally to the left hand as well as the right.

Head,—Keeping the arm nearly straight hold the stick horizontally a few inches above the head, hand slightly forward, and well away to right to avoid being hit on the knuckles.

Face.—Drop point of stick over to the left hand and elbow nearly level, stick perpendicular and three or four inches away from the left cheek.

Face sideways.-Without changing position of the body move stick across to the right, so that it falls perpendicularly down close to right cheek, elbow well up.

Body.—Drop right hand and move stick across front of body keeping elbow level with the shoulder : let the stick fall perpendicularly close to left side.

Flank.—Move the hand across so as to let the stick similarly guard the right side; keep elbow, hand and shoulder level as possible.

Leg.—The leg is guarded simply by moving it back about 12 inches behind the left, retiring a pace, or bringing left foot back to right, both legs straight. 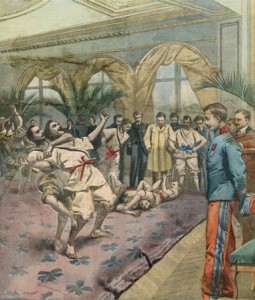 Rear guard.—Stand equally balanced on both feet, left foot about 18 inches in front of right, toes pointing to the front, right foot pointing to the right, holding the stick as before described, raise the right arm over the head so as to keep it a few inches above the forehead, point of the stick inclining forwards and downwards, left arm stretched out in front, back of the hand to the left, fingers extended.

1. When making a hit at an opponent’s head, always keep the fingers uppermost, back of the hand underneath.

2. Care must be taken in making all hits, never to check the blow, but carry it through, i.e., disengage continually and then return immediately to the ” on guard;” if the blow is checked, you cannot be in time either to guard yourself or to make a riposte.

3. The hit is made by a sort of circular sweep of the arm, fingers uppermost, and for loose play and practice the blows dealt should be extremely light ; this is done by loosening the fingers slightly.
Head.—From ” on guard ” hit opponent’s head, follow through and return to ” on guard.”

Leg.—Hit inside of opponent’s leg ; the most useful places are just above the ankle, inside of the knee and shin.

1. Points are made as in sword play, also by throwing the stick forward with the right hand and allowing it to run through the other, as the stick strikes the opponent both hands will be grasping the stick ; knuckles of left hand uppermost.

2. Points are made with the butt end of the stick at any part of the body, the most favorable places being at the throat and ribs.

3. For obvious reasons pointing is not resorted to in loose play as it is too dangerous, but it can be practiced when learning. 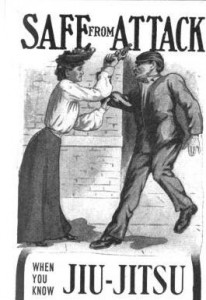 Unfortunately for Barton-Wright, bartitsu declined in popularity by 1903 and was actually eclipsed by jiu-jitsu, as taught by the Japanese martial artists he invited to England. Though bartitsu was adopted by women, jiu-jitsu was taken up by women and children with alacrity, and the former in particular were avid martial artists, as newspapers and periodicals expressed the need for unprotected women to arm themselves in case of assault. Indeed, after bartitsu’s decline, a woman, Mrs. Edith Garrud, established her own dojo, which became a haven for suffragettes, who took on the sport to defend themselves during their violent clashes with police (Tony Wolf has written a book on Mrs Garrud and the “jiujitsusuffragettes,” available here). After the closure of his school, Barton-Wright turned to physical therapy, and if not for the mention (though misspelled) of this short-lived fad by Conan Doyle, bartitsu would have remained a footnote in history. Today, the Bartitsu Society, founded in 2002, revives this long-forgotten sport, and combines historical martial arts with modern martial arts, making a complete and attractive bridge between us and our Victorian forebears!

2 replies on “The Martial Art of Sherlock Holmes”