I am pleased to present an interview with the very talented historical romance writer, Sherry Thomas. Her debut novel, Private Arrangements, garnered instant critical acclaim and Delicious looks to be an even bigger hit. 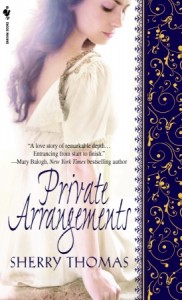 Firstly, congratulations on the success of your debut novel, Private Arrangements. Did you expect such a marvelous response?
The critical reception to Private Arrangements has been a most splendid surprise from the very beginning, especially since I’m the sort of person prone to predict “No, they probably won’t like it too much.” I give huge props to my publisher–Bantam really did everything right by me, from the cover to the ARC giveaway at last year’s RWA Nationals to the distribution of the finished book—and to the online community of bloggers and readers who took a lot of initiative to get the word out. There are other good books that get published and don’t get the fanfare and support and therefore don’t get as much of a response. I’ve been extremely, extremely fortunate.

The late Victorian/Edwardian era is one little seen in historical romance. My roundabout journey to the time period came through the Regency via Restoration England. *g* What inspired you to set your novels at the end of the 19th century, as opposed to the beginning?
In five words, The Shadow and the Star, by Laura Kinsale, in my opinion the best Victorian-set romance ever. Or rather, the particular scene in the book in which the heroine uses a telephone to purchase tickets on a transatlantic steamer. I loved the feeling I got when I read about the telephone—the phone never felt so exotic and exciting to me before or since. Electricity was so very sexy back then. As was the automobile—don’t have to worry about pollution, climate change, or peak oil.  So I was totally sold on the era by that book. I love the turn-of-the-century setting just as much, because of Judith Ivory’s Beast, Bliss, and Dance, which bring the glamour and freedom and newness of the Edwardian era to life. And besides, you don’t have to invent reasons to bath people more than once a week by the end of 19th century. Globalization was already firmly in place in many ways. Women could pursue university education and careers. What’s not to like? (WWI looming on the horizon, alas. One of those days I will write a book set after WWI, to deal with what the children of my characters will have to go through with the Great War.) 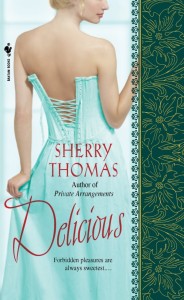 Delicious has been described as a “Cinderella” story. Has the book retained the elements of a fairy tale, or have you given them a good twist?
I’m the one describing it as a Cinderella story, lol. And funnily enough, I first came up with that when I needed something pithy to go on a bookmark. At that point I’d already written and tossed away a good 150,000 words–Delicious went through many tumultuous rewrites. But once the tagline was done—“A man destined for 10 Downing Street. A woman who spends her life in the kitchen. A Cinderella story as you’ve never read.”—I started writing to it. Delicious does retain some elements of the fairy tale: a highborn lady reduced to working in a kitchen, a ball, footgear left behind. But there are no supernatural elements and it’s not precisely a fairy-tale. Or perhaps I should say it’s not a Disney fairy-tale. It’s rather heartbreaking and bittersweet. (I don’t think happiness should be that easy to come by in fiction; the only worthy happy ending is a hard-fought, hard-won one.)

Food plays an important role in the book. How difficult was it to recreate the sumptuous cuisine of the 1890s in prose?
Researching the menus was tremendous fun. I love to read any kind of food anthropology. Writing about food was also pure play—though sometimes torturous for the hungry writer. But making the food matter to the story, so that I’m not writing just food porn, was a whole different story. I tried all kinds of literary devices. I swiped a recipe from The Gastronomical Me by M.F.K. Fisher (best food memoir ever), stole the madeleine from Remembrance of Things Past, attempted—and eventually discarded—the magical realism from Like Water for Chocolate. As a result, in Delicious, food is never purely food. It is lust, longing, loneliness, regret, and I hope, in the end, fulfillment.

What are some of the themes you find yourself drawn to in your novels, and in the novels of others?
In my own writing I’m very much drawn to reconciliation. I think it is one of the most beautiful and most fully human acts to forgive old trespasses and renew friendship/love. I’m not sure whether I’ve a particular theme that I’m drawn to while reading. I read for the story, the characters, and the prose. I don’t look for themes when I open a book. All I ask is that it holds my attention, which is very, very fickle.

When you began to research the late Victorian/Edwardian era, what sort of things intrigued you? Did you learn anything new? Anything that revised your opinion about the Victorians?
I think the Victorians are nuts. But then again, I think people reading about say, contemporary American society, one hundred years from now would come to the exact same conclusion about us. Reality TV, anyone? What I am continually surprised about is how scientifically and technologically advanced the Victorians were. I think it’s my 20th century insularism, that keep me thinking that prior to 1900 people lived in the dark ages. I used to think the Victorians were very different from us. But more and more at times I feel they are very similar to us, if you compare fin-de-(19th)siècle UK and turn-of-the (21st) century US: the commerce, the materialism, the globalization, the staunch mores of a certain segment of the population, the anti-religious sentiment of a good deal of the rest, the overseas meddling, and the large middle class mostly concerned with the house and the children.

I personally find your prose spare, yet evocative. Did you find your voice easily? What writers have inspired you?
No, my voice did not really come to me until I’d written a million words. Or rather, I myself couldn’t tell that I had a recognizable voice before that. And then one day I wrote the beginning of a new story and my voice was there. It had arrived. I tend to love very lush, ornate writing like Judith Ivory’s. And I did try to copy Ivory’s voice once—but not for long. Because voice is more than how one throws words down on paper, it is representative of the author’s entire outlook. And I just don’t view the world in such saturation of color and details. So I evoke because I have to—I’m not a visual person and I don’t “see” the places where I set my story until I can describe it to myself. Does that make any sense?

What’s next on your plate?
A historical romance set in 1897, half in India, during a spate of uprisings on the Northwest Frontier, and the rest in good old Britain. The heroine is a physician. The hero is a polymath—a fancier version of the usual jack-of-all-trades so I don’t have to decide on what he does. In my head I see him as the mathematician who taught Einstein enough about higher geometry for the latter to formulate the theory of relativity. Now that would be sexy. I also revisit the theme of “marriage-in-distress” here, except this marriage was so distressed, it has been annulled already. *g*

Anything else you would like to add?
Just thank you very much and keep up the good work. I think the Edwardian era is fascinating and I hope more and more readers will fall in love with it.

Sherry arrived on American soil at age thirteen. Within a year, with whatever English she’d scraped together and her trusty English-Chinese dictionary by her side, she was already plowing her way through the 600-page behemoth historical romances of the day. The vocabulary she gleaned from those stories of unquenchable ardor propelled her to great successes on the SAT and the GRE and came in very handy when she turned to writing romances herself. She lives in Austin, Texas with her husband and two sons. When she’s not writing, she enjoys reading, playing computer games with her boys, and reading some more. Read an excerpt of Delicious at Sherry’s website & purchase a copy US or UK.