A few weeks ago I received an email from a reader curious about daily life at university for an upwardly mobile young man and I figured the least I could do was to share a description with you! 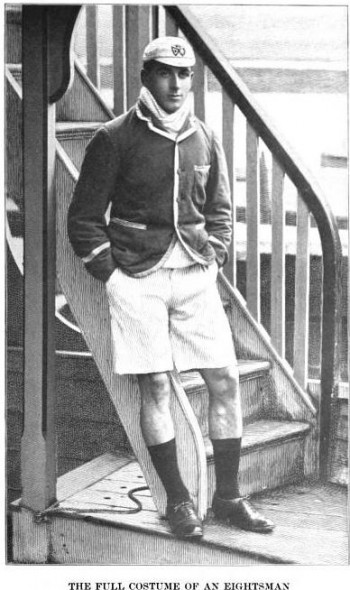 When a freshman is once established in college, his life falls into a pleasantly varied routine. The day is ushered in by the scout, who bustles into the bedroom, throws aside the curtain, pours out the bath, and shouts, “Half past seven, sir,” in a tone that makes it impossible to forget that chapel — or if one chooses, roll-call — comes at eight. Unless one keeps his six chapels or “rollers” a week, he is promptly “hauled” before the dean, who perhaps “gates” him. To be gated is to be forbidden to pass the college gate after dark, and fined a shilling for each night of confinement.

Breakfast comes soon after chapel, or roll-call. If a man has “kept a dirty roller,” that is, has reported in pyjamas, ulster, and boots, and has turned in again, the scout puts the breakfast before the fire on a trestle built of shovel, poker, and tongs, where it remains edible until noon. If a man has a breakfast party on, the scout makes sure that he is stirring in season, and, hurrying through the other rooms on the staircase, is presently on hand for as long as he may be wanted. The usual Oxford breakfast is a single course, which not infrequently consists of some one of the excellent English pork products, with an egg or kidneys. There may be two courses, in which case the first is of the no less excellent fresh fish. There are no vegetables. The breakfast is ended with toast and jam or marmalade. When one has fellows in to breakfast, and the Oxford custom of rooming alone instead pf chumming makes such hospitality frequent, — his usual meal is increased by a course, say, of chicken. In any case it leads to a morning cigarette, for tobacco aids digestion, and helps fill the hour or so after meals which an Englishman gives to relaxation.

At ten o’clock the breakfast may be interrupted for a moment by the exit of some one bent on attending a lecture, though one apologizes for such an act as if it were scarcely good form. An appointment with one’s tutor is a more legitimate excuse for leaving; but even this is always an occasion for an apology, in behalf of the tutor of course, for one is certainly not himself responsible. If a quorum is left, they manage to sit comfortably by the fire, smoking and chatting in spite of lectures and tutors, until by mutual consent they scatter to glance at the ” Times ” and the ” Sportsman” in the common-room, or even to get in a bit of reading.

Luncheon often consists of bread and cheese and jam from the buttery, with perhaps a half pint of bitter beer; but it may, like the breakfast, come from the college kitchen. In any case it is very light, for almost immediately after it everybody scatters to field and track and river for the exercise that the English climate makes necessary and the sport that the English temperament demands.

By four o’clock every one is back in college tubbed and dressed for tea, which a man serves himself in his rooms to as many fellows as he has been able to gather in on field or river. If he is eager to hear of the games he has not been able to witness, he goes to the junior common-room or to his club, where he is sure to find a dozen or so of kindred spirits representing every sport of importance. In this way he hears the minutest details of the games of the day from the players themselves; and before nightfall — such is the influence of tea — those bits of gossip which in America are known chiefly among members of a team have ramified the college. Thus the function of the “bleachers ” on an American field is performed with a vengeance by the easy-chairs before a common-room fire; and a man had better be kicked off the team by an American captain than have his shortcomings served up with common-room tea.

The two hours between tea and dinner may be, and usually are, spent in reading.

At seven o’clock the college bell rings, and in two minutes the fellows have thrown on their gowns and are seated at table, where the scouts are in readiness to serve them. As a rule a man may sit wherever he chooses; this is one of the admirable arrangements for breaking up such cliques as inevitably form in a college. But in point of fact a man usually ends by sitting in some certain quarter of the hall, where from day to day he finds much the same set of fellows. Thus all the advantages of friendly intercourse are attained without any real exclusiveness.

Across the end of the hall is a platform for high table, at which the dons assemble as soon as the undergraduates are well seated. On Sunday night they come out in full force, and from the time the first one enters until the last is seated, the undergraduates rattle and bang the tables, until it seems as if the glass must splinter. When, as often happens, a distinguished graduate comes up, — the Speaker of the Commons to Balliol, or the Prime Minister to Christ Church, — the enthusiasm has usually to be stopped by a gesture from the master or the dean.

After hall the dons go to the senior common-room for the sweet and port. At Trinity they have one room for the sweet and another for port. The students, meanwhile, in certain of the colleges, may go for dessert to the college store; that is to say, to a room beneath the hall, where the fancy groceries of the college stock are displayed for sale. There are oranges from Florida and Tangiers, dainty maiden blush apples from New England, figs and dates from the Levant, prunes and prunelles from Italy, candied apricots from France, and the superb English hothouse grapes, more luscious than Silenus ever crushed against his palate. There are sweets, cigarettes, and cigars. All are spread upon the tables like a Venetian painting of abundance; but at either end of the room stand two Oxford scouts, with account-books in their hands.

In the evening, when the season permits, the fellows sit out of doors after dinner, smoking and playing bowls. As long as the English twilight lingers, the men will sit and talk and sing to the mandolin; and I have heard of fellows sitting and talking all night, not turning in until the porter appeared to take their names at roll-call. On the eve of Mayday it is quite the custom to sit out, for at dawn one may go to see the pretty ceremony of heralding the May on Magdalen Tower. If a man intends to spend the evening out of college, he has to make a dash before nine o’clock; for love or for money the porter may not let an inmate out after nine.