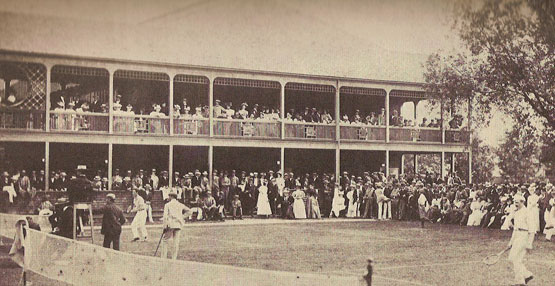 More than a century before Roger Federer and Andre Agassi faced off in the U.S Open tennis finals in New York, players were donning fancier attire and taking to the courts of Newport to compete in championship matches.

The earliest incarnation of the tournament, then known as the U.S. National Championships, began in Newport in 1881. Players competed on grass courts while musicians performed classical music in a decidedly genteel setting.

The tournament moved to New York, but Newport for years after continued to host some of the sport’s best and, in 1954, became home to the International Tennis Hall of Fame & Museum.

That history is chronicled in a new exhibit at the hall of fame, which focuses on the city’s early ties to tennis but also on the rich architectural history of the museum’s wooden-shingled headquarters, the Newport Casino.

The exhibit of photographs and artifacts, which coincides with the casino’s 130th anniversary, is intended to appeal to tennis buffs as well as to those more interested in the social lives of the wealthy industrialists in Newport.

“The Newport Casino is actually the biggest and most valuable collection item that the hall of fame has,” said Mark Stenning, the museum’s CEO.

“Anyone who has an interest in tennis would be interested in the nature of this exhibit,” he added. 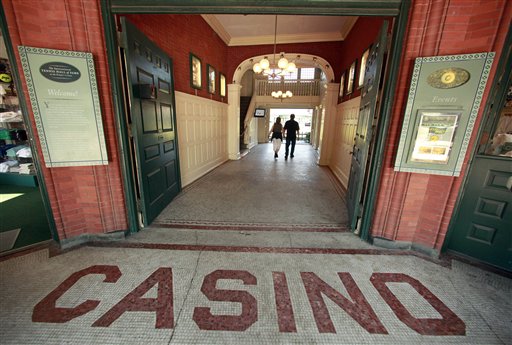 The casino opened as a social and recreational club for the wealthy and never was a gambling establishment. It was founded by tennis fan and New York Herald publisher James Gordon Bennett, who, according to the exhibit, became outraged with his rival Newport men’s club in 1879. Bennett didn’t like the club’s reaction after a guest of his brazenly rode his polo pony into the club rooms.

Furious after being chastised by the city’s elite, Bennett bought land on Bellevue Avenue — today home to opulent Gilded Age mansions — for what would become the Newport Casino.

The casino opened in 1880, designed by influential architect Stanford White, who created the Washington Square Arch in New York and in 1906 was famously killed in New York by [Evelyn Nesbit Thaw’s] jealous husband.

The casino became an instant hotspot for tennis, still a relatively new sport in America. The casino in 1881 began hosting the U.S. National Championships — a 25-player competition played amid a string quartet’s music. But because Newport was a tough-to-reach destination, the tournament was moved to Queens after the 1914 championships.

Still, other tournaments — including the Davis Cup and a college competition — continued in Newport. Players competed during the day, attended soirees at night and were in some cases hosted by benefactors or a local hotel. Bill Tilden, Don Budge and Bobby Riggs were among those who played at Newport, the exhibit says.

The casino also was a recreational retreat for the affluent railroad and industrial magnates who spent summers in Newport.

Besides grass tennis courts, the casino also featured a 500-seat theater — which recently has been renovated — that offered ballroom dancing and recitals and hosted performers including Will Rogers and Vincent Price. Guests also enjoyed activities such as archery and bowling.

The Hall of Fame & Museum opened at the casino in 1954 and offers a decade-by-decade look at the sport and its top players. Past inductees include Pete Sampras, Ivan Lendl, Chris Evert and Arthur Ashe.

The exhibit will be up through April. It was pulled together from “unearthed treasures” from the museum’s archives, including trophies, original casino club serving pieces, said Nicole Markham, the curator of collections. The exhibit’s emphasis on cultural history is a departure from the museum’s more tennis-oriented displays.

“It was a refreshing change to not have to be looking up tennis stats for every artifact,” said Markham, who designed the exhibit.

If nothing else, the exhibit may help dispel confusion among visitors puzzled by the Newport Casino name and trying in vain to find poker tables, Stenning said.

“We’ll get people who walk in and say, ‘Can you gamble here?'”

Article and photographs courtesy of The Associated Press, with the exception of the first, which is courtesy of New York Social Diary