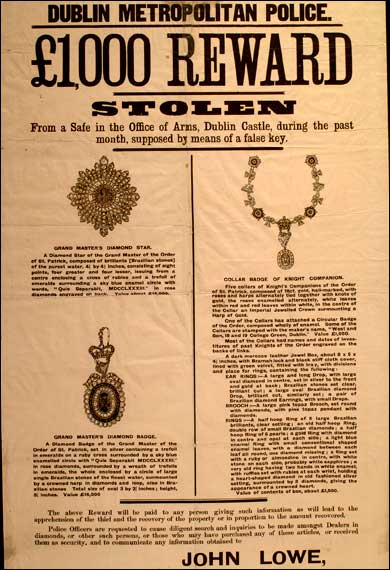 The theft of the Irish Crown jewels in 1907 remains an unsolved mystery and a lingering scandal.

Technically, the jewels were not royal, consisting of “the insignia of the Grand Master of the Order of St Patrick (the Lord Lieutenant) and the collars and badges of the Knights of St Patrick.” The former was a star—made of Brazilian diamonds with eight star points encircling a shamrock-shaped emerald and a cross of rubies on a background of blue enamel—and a badge, which was also made of emerald shamrocks and a ruby cross surrounded by blue enamel and rose diamonds and within Brazilian diamonds. They had originally been the property of Queen Charlotte, and then of her sons George IV and William IV, the last of which granted the insignia to the Order of St Patrick, which was founded in 1783 as an Irish equal to the Order of the Garter, for the Lord Lieutenant to wear on ceremonial occasions. 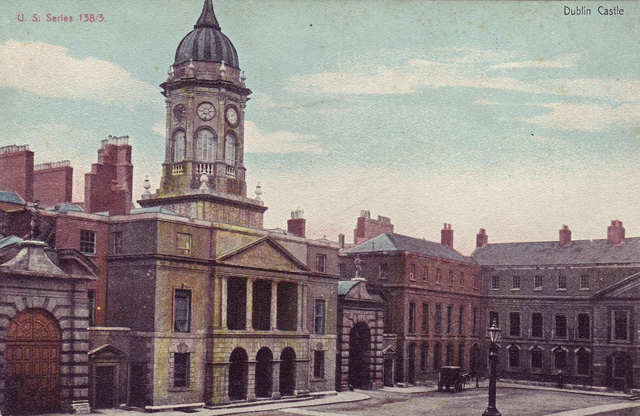 They paled in comparison to the English crown jewels locked in the Tower of London, but they nonetheless held great symbolic value, linking the fortunes of Ireland with that of England—no doubt a sore spot for Irish nationalists. In 1903, the Office of Arms moved from Bermingham Tower to Bedford Tower in Dublin Castle, and Arthur Vicars, Officer of Arms at Dublin Castle, hoped to provide extra security by moving into the tower. His request was refused; a concession was to build a strong-room to contain the jewels. The jewels were placed in a safe, but when it came time to place the safe into the strong-room, the door proved too narrow. Inexplicably, none of the officers thought to buy or build a smaller safe, much less measure the safe before building the room.

Vicars possessed the keys to not only the Office of Arms but to the safe, where the jewels resided peacefully for four years. In June of 1907, Vicars showed the jewels to a friend, J.C. Hodgson, Librarian to the Duke of Northumberland at Alnwick Castle, who was visiting Ireland—the was the last time they were seen. Soon after, the keys went missing and the doors left open; surprisingly, no one, not even Vicars, saw fit to raise alarm. It wasn’t until a member of the Order of St. Patrick died, and his insignia sent to the Office of Arms to invest upon a new Knight of the order, that Vicars unlocked the safe to discover that the jewels were missing. 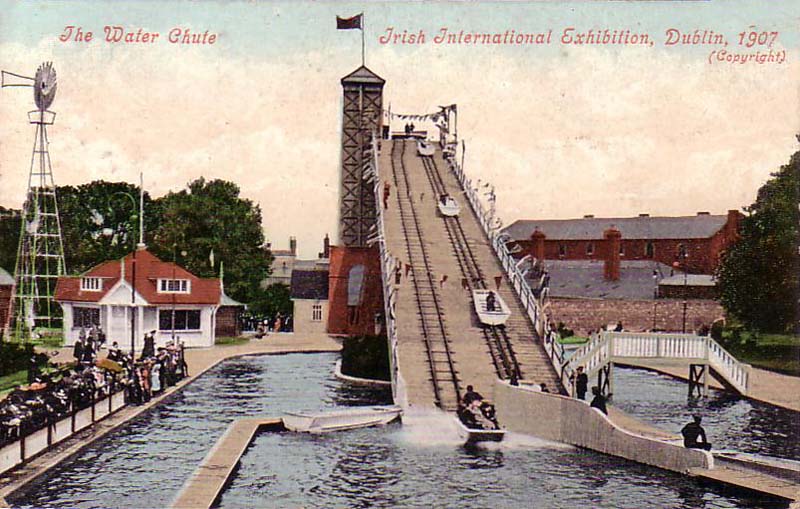 This was the worst possible time for a theft of this magnitude. That summer, King Edward and Queen Alexandra were in Ireland to open the Irish International Exhibition in Herbert Park, and the fragile relationship between the Royal Family and the Irish was at one of its tensest moments. An immediate inquiry was set up involving Commissioners of the Police and the Detectives’ Department of the Dublin Metropolitan Police, both based in Dublin Castle, as well as Scotland Yard, who began to circulate photographs of the jewels and a written report of the theft to police administrations across the globe. The safe was not opened by force, and after quizzing Dublin’s locksmiths, neither had a duplicate set of keys been created. The police concluded that this was an inside job.

Vicars maintained his opinion that no one of his staff had anything to do with the robbery, and he refused to step down from his post, even though it was a position strongly suggested by the King. A court of inquiry was formed in 1908 to quell the rumors and unrest surrounding the theft, but Vicars refused to participate. Nonetheless, that did not stop him from accusing his second-in-command, Francis Shackleton of stealing the jewels. Though Shackleton was exonerated, there arose rumors that Shackleton, a homosexual and known to be chronically short of money, threw orgies in the castle and had been blackmailed about them.

To Vicars the entire investigation looked fishy and haphazard. He was fired from his position after the closure of the court, and all the public knew of the court of inquiry was released in a published report which stated that Vicars had been “found not to have exercised proper care as the custodian of the Regalia of the Order of St Patrick.” When he died in 1921–incidentally, murdered by the IRA–his will pointed a finger from the grave at Francis Shackleton, whom Vicars saw as being protected by the government.

8 thoughts on “The Theft of the Irish Crown Jewels”