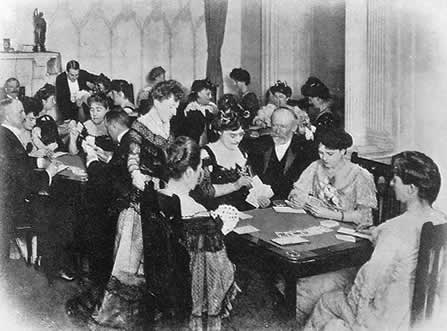 “It is as futile to argue with a bridge club maniac as with an opium eater or an inebriate. The habit has outreached all rational discussion. Duty, common sense, reputation have become meaningless words before the victim’s devastated conscience.”

So said the pseudonymous “Frank Danby” in a 1912 article in an English periodical. By the time this article was published, the mania for bridge had become a major source of entertainment for society on both sides of the Atlantic, though nowhere else did this card game become a point of obsession than deep within the heart of Mayfair. In a previous article, I discussed the emergence and growth of ladies’ clubs. Though they claimed to be patterned after the historic gentlemen’s clubs dotting Pall Mall, many in the beginning were places for ladies to rest and unwind between bouts of shopping or visiting Town, or for ladies of certain social or education sets to reconnect. With the advent of bridge, ladies clubs began to fall in line with their famous counterparts (White’s, Boodles, Marlborough) as places where women convened to gossip, drink tea and cocktails, gamble, and get away from men.

Mrs. C. S. Peel recounted her experience with women and bridge, becoming acquainted with the game: “now that [my] children were away from home and my tea-time hours free, I became an ardent Bridge player.” Bridge players were an impatient lot, not caring to show their irritation or anger with slow learners or sloppy players, and Mrs. Peel “also began to realize that although I was playing for stakes which I could afford to lose, others were not, and in addition to the irritation caused by my mistakes, there was the irritation caused by losing more money than could be spared. I often wondered to what extent the housekeeping in many a home suffered after a run of bad luck at cards.” Her worries echoed “Danby,”: “The danger and the higher stakes of such an illegal den inspire these women to heights of recklessness, and like a flock of brilliant, silly birds they swoop down upon some tiny house where fortunes are quietly staked and lost. London is a silent waste when these gamblers return to their homes to count feverishly the contents of their gold bags.”

Bridge ultimately became an obsession with many women; “by three o’clock they would be waiting patiently to begin to play. They drank their tea while they played, ate a light club dinner, talking Bridge meanwhile, were in the cardroom again directly it opened for the evening’s sitting, and departed only when its doors closed, for which, if they were willing to pay fines, might not be until a late hour.”

“Danby” paints an even more dramatic picture of these women: “They go to lunch, sometimes to a club, sometimes to a restaurant, sometime escorted, sometimes with another woman. During lunch they reconstruct the gambling of the night before, and virtually count the seconds until 3:30, when they present themselves at their clubs for silent, exhausting ‘rubber’ to carry them until dressing time. They swallow their tea when their hand is the ‘dummy,’ or else go out for a fifteen-minute visit with a rich relative. Invariably they rush back to the club, hungry for ‘one more rubber.’ At 9 o’clock they return glistening with spangles and craving for a resumption of the game. Either they have losses to make up or winning to add to…Auction bridge goes on until 1 or 2 o’clock in the morning” concluding that “few women have the character and the education to repel this bridge madness once it has fastened itself on the brain and the soul of its victim. Woman is not moderate by nature, and that explains the grave danger of the situation.”

2 thoughts on “The Bridge Mania”