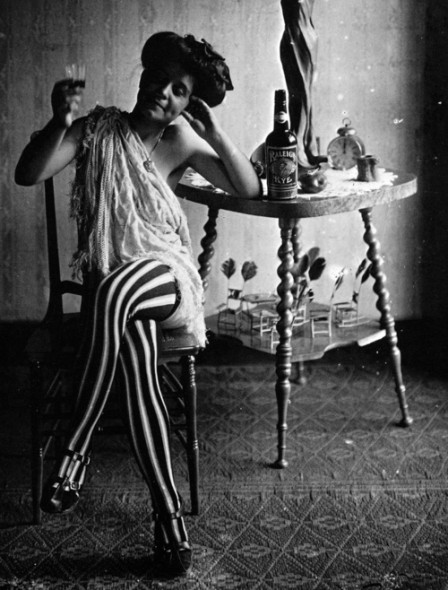 I discovered this book earlier this year during one of my haphazard click-throughs on the New York Times website, and was very intrigued that it has survived for over 100 years (who purchased the book? Who preserved it?). Alison Leigh Cowan of the NYT blog, City Room describes it:

Only this palm-sized book, published in 1870 and long hidden away at the New-York Historical Society, did not confine its anonymous critique to the quality of wines or the ambience of the 150 establishments listed between its covers. Rather, it defined its role as delivering “insight into the character and doings of people whose deeds are carefully screened from public view.”

…Readers of the book, “The Gentleman’s Directory,” learned that “an hour cannot be spent more pleasantly” than at Harry Hill’s place on 25 East Houston Street. And they learned that Ada Blashfield of 55 West Houston Street had “8 to 10 boarders both blondes and brunettes,” playing host to “some of our first citizens.” The book also divulged that Mrs. Wright’s place at 61 Elizabeth Street had “everything that makes time pass agreeably,” and that Miss Jennie Creagh had spared “neither expense nor labor” at 17 Amity Street, a onetime Manhattan address, to conjure a “palace of beauty forever” out of French mirrors, rosewood furniture and fine bedding.