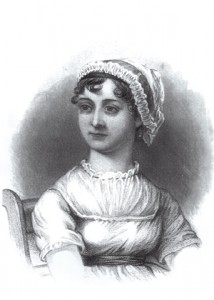 Ah Jane Austen! It is apparent that she shall never go out of style, as witnessed by the many TV & movie adaptations and novels inspired by her life and works. But the obsession with all things Austen goes much farther back than spate of movies released in the 1990s.

The “cult” of Jane Austen finds its origins in 1870 with the publication of a memoir written by her nephew James Edward Austen-Leigh. In doing so, he “sentimentalized his aunt to make her conform to Victorian values, which had become more rigid and repressive by mid-century, so that she would not offend Victorian sensibilities.” As a result, many contemporary authors praised her novels and their endorsements propelled Jane Austen into the spotlight.However there were her detractors (as there are today, as I have found, having stumbled upon a facebook group dedicated to their hatred of her works–it is telling that the majority of its members are men).

Mark Twain held her works in revulsion, stating: “Jane Austen? Why, I go so far as to say that any library is a good library that does not contain a volume by Jane Austen. Even if it contains no other book.”

But Rudyard Kipling demurred, writing a short story entitled “The Janeites“, in which a group of English soldiers in WWI who formed a “shadow Masonic lodge based on their deep admiration and extensive knowledge of Jane Austen’s novels, which are a source of consolation and support as they undergo the horrors of World War I trench warfare.” By the 1890s, the popularity of Jane Austen and her novels was such that it “resulted in no less than ten new editions of her novels in less than a decade and three memoirs by different hands within as many years”.

Another aspect of the craze for Jane Austen’s novels were found in the memoirs of Lady Diana Manners, in which she states that in her debut Season in 1911:

“with all the lunches, dinners, theatres, and balls of the forthcoming month, she would be writing at least five ‘Collinses’ a day. These thank-you notes, requiring extensive consultation of a recognized dictionary in order to make them sufficiently original, accurate and ingratiating, took their nickname from the obsequious gratitude that flowed from the pen of Mr. Collins in Pride & Prejudice.”

Coincidentally, the 1910s saw a revival of the “Directoire” or Empire style of the early nineteenth century, with 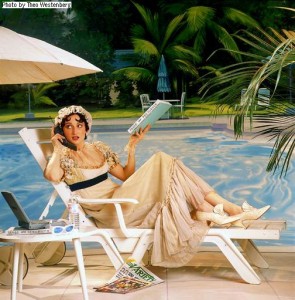 high-waists, slim silhouettes and the popularity of turbans and other Oriental inspired clothing.

1938 saw the first documented cinema adaptation of one of her novels, being–you guessed it–Pride & Prejudice. This was followed by a watershed of adaptations for TV and the motion picture industry, and one that continues today with the BBC’s recent “Jane Austen Season” (aired in America January 2008) and the recently released Becoming Jane.

One reply on “The Cult of Jane Austen”